The Reserve Bank has poured cold water on hopes of a surge in wage growth for most Australians in the coming year while lifting expectations the economy will be strong enough to withstand an early end to its $4 billion-a-week quantitative easing program.

Minutes of the bank’s December meeting, its final official communication of the year, show despite business concerns about a lift in wages the RBA has yet to find evidence of a nationwide breakout in income growth. 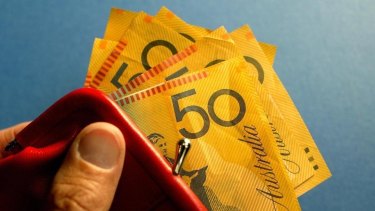 The Reserve Bank says it has yet to see evidence of a broad-based lift in wages sufficiently high to drive up inflation.Credit:Gabriele Charotte

The bank has held the official cash rate at 0.1 per cent since November last year while buying record amounts of government debt to help soften the economic blow caused by the coronavirus recession.

While financial markets believe the bank will start lifting interest rates by the middle of next year, the RBA has made clear it does not expect wages to be growing fast enough to push inflation sufficiently high as to warrant higher rates until 2024.

The December minutes show that while there has been a lift in wages in some sectors and a tightening in the jobs market, the bank believes there is yet to be a wide scale lift in wages pressure.

“Information from the bank’s liaison program suggested that firms were generally expecting wage increases over the coming year of around 2.5 per cent, broadly in line with surveys of unions’ expectations,” the minutes show.

“Wages growth had picked up, but only to the low rates prevailing prior to the onset of the pandemic. A further gradual pick-up in wages growth was expected as the labour market tightens.”

The minutes also showed the bank is detecting a lift in the number of people prepared to shift jobs. Most of the increase is in high-skilled professional jobs with mobility in other sectors around their long-term averages.

Movement between jobs is often associated with wage growth pressure.

“Part of this increase reflected workers catching up on planned job changes that had been put on hold, as well as more workers feeling encouraged by strong labour market conditions to change jobs,” the minutes showed.

“The higher rates of voluntary job turnover in some sectors, especially in a tight labour market, could in time lead employers to offer higher wages to retain their workers.”

While the ultra-low official cash rate has been the bank’s key policy measure to support the economy, it has also engaged in quantitative easing by producing billions of dollars to buy up government debt.

At the end of November, the bank held a record $326 billion in government debt including $265 billion in federal bonds, $15.6 billion worth of NSW bonds and $13.3 billion of Victorian bonds.

In February last year, the bank held just $16.3 billion in government debts including $14.2 billion worth of federal debt.

The bank plans to revisit its bond-buying program at its first meeting of the year in February.

On Tuesday, Commonwealth Bank’s head of Australian economics Gareth Aird said it now appeared the bank would end the bond-buying program at that meeting.

Mr Aird, who believes the RBA will start lifting interest rates in November next year, said the jobs market and inflation was likely to be stronger than expected which would force the bank into ending its quantitative easing program.

“The risk to the economy posed by the Omicron variant could shift the economic outlook, but that is not our central scenario,” he said.

Research released on Tuesday by the Australian Office of Financial Management, the agency that oversees the government’s bond sales, suggests the financial markets would easily absorb an end to the RBA’s program.

It found local banks, which have traditionally been substantial buyers of government debt, would fill the void left by the RBA.

The end of quantitative easing would remove a key element of the Reserve’s support for the economy.

Credit rating agency Fitch Ratings said on Tuesday that while the Omicron variant posed a risk, the general economic outlook for the country remained strong.

“We expect growth momentum to be sustained in 2022, as households still have large savings buffers to drive consumption,” it said.

“The high vaccination rate should limit the need to impose virus-related restrictions on economic activity and travel.”