Hundreds of millions of taxpayer dollars are being pledged to grow Australia’s gas industry, a major source of Australia’s greenhouse emissions, under part of the federal government’s pledge to reach net zero emissions by 2050 without enforcing pollution limits or carbon prices on industry.

Resources Minister Keith Pitt announced on Friday $60 million would be invested in gas exploration in the Cooper and Advale basins – spanning the Queensland and South Australian border. 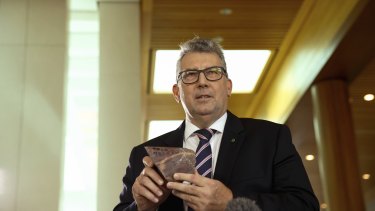 Resources Minister Keith Pitt was dumped from Cabinet in June when Barnaby Joyce became Nationals leader, but was returned as a condition of his party signing on to the Prime Minister’s commitment to net zero by 2050. Credit:Dominic Lorrimer

To date $285 million has been committed to the Strategic Basin plans to encourage the development of private gas projects, including $224 million for the Beetaloo Basin in the Northern Territory and $21 million for Queensland’s North Bowen and Galilee Basin.

The funding for the Cooper and Advale basins includes $30 million for a competitive grant program to drive exploration and development and $30 million for geoscientific data to aid explorers.

Under its net zero emissions plan, the government is banking on massive new gas fields being developed, requiring billions of dollars of investment, with modelling that assumes the industry will be 13 per cent bigger by 2050.

“I don’t have a problem with governments opening acreage if private companies are spending their own money knowing Australian governments and the countries who buy our gas have committed to reach net zero (emissions),” Mr Wood said.

“What we absolutely should not be doing is putting public money into any of this. There’s no justification to take on that sort of risk.”

Mr Wood said the risk premiums would rise on loans to gas explorers as countries around the world strive to reduce consumption of fossil fuels to meet their climate pledges.

“Growing gas production is not consistent with our greenhouse gas target, particularly because the fugitive emissions from gas production are a major source of emissions.”

Industry expert and EnergyQuest chief executive Graeme Bethune said last week to generate 13 per cent industry growth new gas fields will need to be developed to replace the existing Australian projects that will be exhausted in coming decades.

Liquified natural gas (LNG) exports make up the vast majority of the industry’s revenue and Dr Bethune says projections for growth are too optimistic in the long-term because “all of the existing projects are likely to have exhausted their proved and probable reserves by 2050”.

Existing gas fields on the North West Shelf could run dry by 2028, the Wheatstone by 2033, Prelude and Darwin by 2044 and Ichthys, Gorgon and Pluto/Scarborough by 2049, Dr Bethune said.

Australia’s major gas buyers in Japan, South Korea and China have committed to reach net-zero by mid-century and the Reserve Bank has warned Australia’s $49 billion-a-year LNG export industry would be halved by 2050 if they deliver on their emissions pledges.

The government anticipates growth in export markets such as South Korea and Taiwan.