Home » Lifestyle » Naomie Harris on her harrowing Who Do You Think You Are? experience Naomie Harris on her harrowing Who Do You Think You Are? experience

The slavery in my past left me shaken and stirred: Miss Moneypenny Naomie Harris on her harrowing Who Do You Think You Are? experience – and how Bond’s turned over a new leaf

Those of a traditionalist disposition might want to look away now.

The old-fashioned values and casual sexism that defined the 007 of previous generations will be a thing of the past, according to Naomie Harris, who’s reprising her role as MI6 secretary Eve Moneypenny in the forthcoming Bond movie.

‘We’re seeing a real evolution of his character,’ she says of the new and improved James Bond.

‘There’s real respect for the women in his life.’

While this may strike terror into hardcore fans, Naomie delivers the news – as with everything – with a cheerful smile. 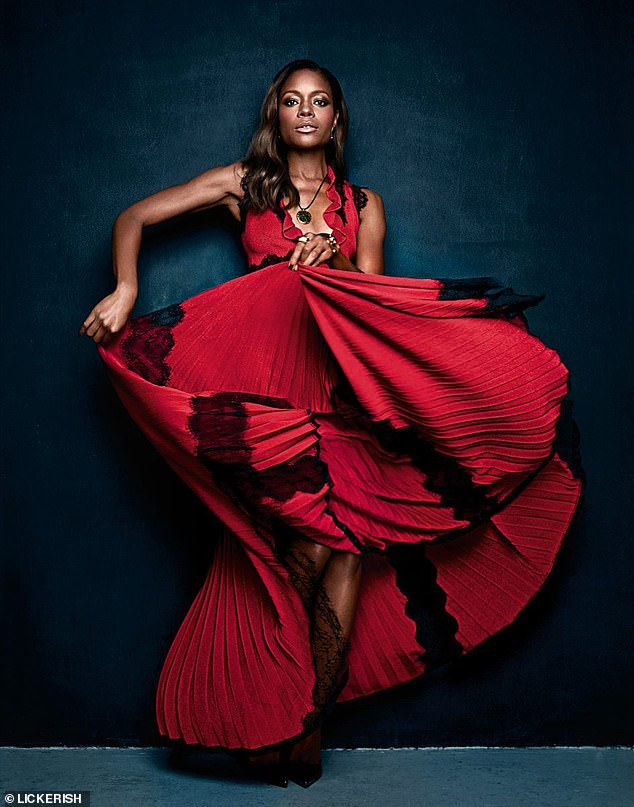 Naomie Harris, 42, (pictured) who stars as MI6 secretary Eve Moneypenny in Bond 25, spoke about working on the film since the departure of Danny Boyle

Now 42, though looking a decade younger, London-born Naomie is on her third Bond outing, following Skyfall (2012) and Spectre (2015).

Having filmed her first scenes for the new film earlier this month, she’s glad to be back.

‘It’s wonderful. Normally as an actor you’re a gypsy, you have to make new connections, which means you’re alone a lot. On Bond, you’re reunited with family.’

It’s a family that’s been rather dysfunctional of late.

Bond 25, as it is known (its provisional title, Shatterhand, refers to the alias used by Bond’s old nemesis Blofeld), has been plagued by so many problems there are whispers of the movie being ‘cursed’.

Daniel needed ankle surgery after an on-set accident, while a crew member was injured after a planned explosion at Pinewood Studios went wrong.

The film’s original director Danny Boyle abruptly left the project last August over ‘creative differences’ (he was replaced by True Detective director Cary Fukunaga), and difficulties with the script meant new writers had to be hired, most notably Fleabag creator Phoebe Waller-Bridge. 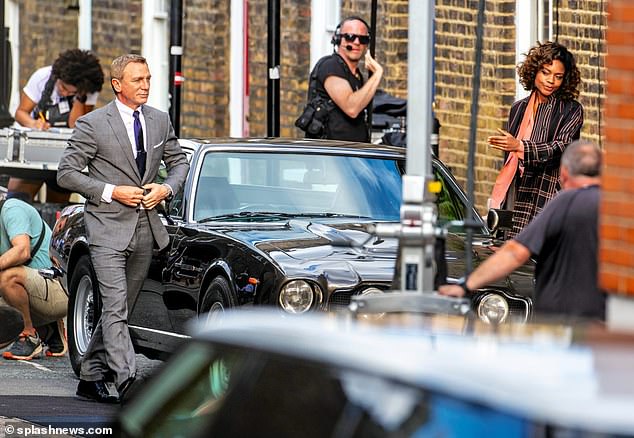 So is the movie jinxed? ‘No, not at all,’ insists Naomie.

‘I really don’t believe that. If you put the spotlight on any film, you can find things that have gone wrong or people who have been injured – that’s the nature of film-making.

‘There are always bumps in the journey, and sometimes when there are bumps, there may be a better movie at the end.’

But the departure of Danny Boyle was a bump Naomie could have done without. ‘He’s the reason, really, I’ve had the career I’ve had,’ she says.

Danny helped launch her by casting her in the 2002 horror film 28 Days Later alongside Cillian Murphy and Christopher Eccleston, and nine years later he cast her again in the stage version of Frankenstein at the National Theatre opposite Benedict Cumberbatch.

Director Sam Mendes saw that play and immediately thought of her for the role of Moneypenny when he took the helm of Skyfall.

‘I miss Sam a lot, my last two Bonds were with him. But I’m really sad not to be working with Danny. 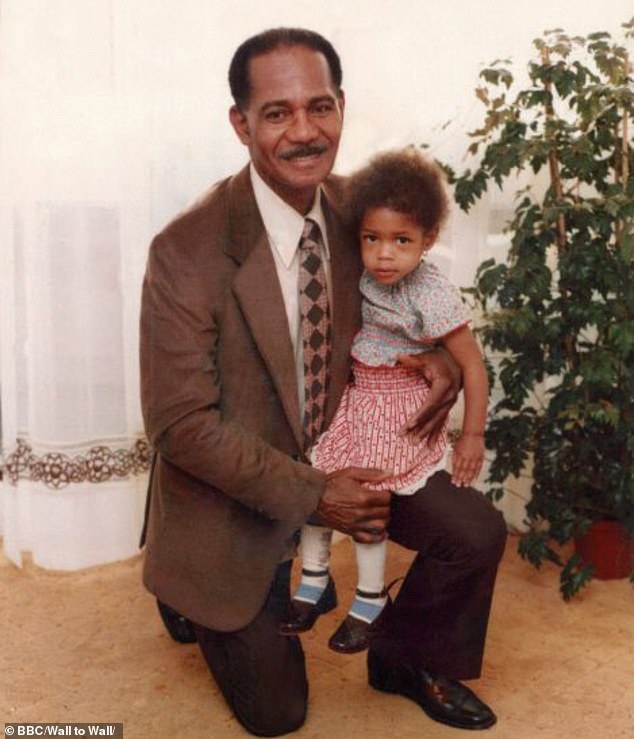 ‘Whether he made the decision to leave or it was the franchise’s decision or mutual, I hope it’s for the benefit of the project,’ she says, fearful of saying the wrong thing given the veil of secrecy around Bond 25.

The producers, Barbara Broccoli and her half-brother Michael G Wilson, are hoping Phoebe Waller-Bridge will change its fortunes.

Having worked on the female-centric series Fleabag and Killing Eve, she is the perfect choice to rid Bond of his dinosaur tendencies.

The film begins with Bond retired in Jamaica, and it was recently revealed that the character played by black British actress Lashana Lynch will take over his famous code name, making her the first black female 007.

Although Bond is coaxed back into the field, his girlfriend from Spectre, Dr Madeleine Swann (Léa Seydoux), will also return, suggesting a more settled British agent.

And with Naomie’s highly capable Moneypenny coming back and the addition of Cuban-Spanish actress Ana de Armas to the cast, the female head count is high.

‘There are now four women in the script and they all have incredibly strong roles and play a huge part in driving the story forward and assisting Bond,’ says Naomie. 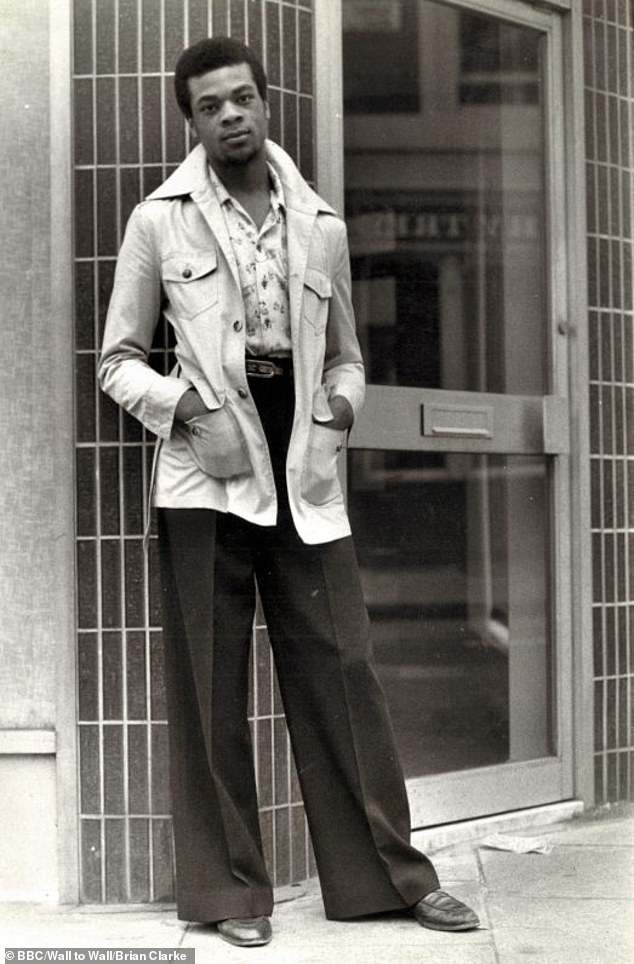 The daughter of Jamaican-born reiki healer Carmen Harris (formerly a scriptwriter on EastEnders under the pseudonym Lisselle Kayla), Naomie wasn’t even born when her Trinidadian father Brian Clarke (pictured) left

Naomie, in fact, was instrumental in ensuring the phrase ‘Bond girl’ was phased out in favour of ‘Bond woman’ (‘I tried my little best,’ she admits).

Presenting an award at the 2012 BAFTAs, she had been given a few words to say which referred to herself as a ‘Bond girl’.

‘I said, ‘Well, I’m going to change that’.’ Barbara Broccoli agreed and now on set, ‘Bond girl’ has been eliminated as ruthlessly as a Bond villain.

As for Moneypenny, she’s been on desk duty since Skyfall after unintentionally shooting Bond in the field.

‘I can’t say what she gets up to,’ she says. ‘It’s very secretive. The scripts don’t disintegrate after reading, but they get hand-delivered and you have to sign non-disclosures.’

The press launch for Bond 25 took place earlier this year in Jamaica and it proved emotional.

While there, Naomie filmed segments for the new series of BBC1’s genealogy show Who Do You Think You Are?, which also features actress Kate Winslet and Harry Potter’s Daniel Radcliffe.

‘When I told my friends about it they said, ‘They’re going to make you cry’,’ says Naomie.

The daughter of Jamaican-born reiki healer Carmen Harris (formerly a scriptwriter on EastEnders under the pseudonym Lisselle Kayla), Naomie wasn’t even born when her Trinidadian father Brian Clarke left.

She had very little contact with him, although they did sometimes bump into each other in Muswell Hill, north London, near to where she grew up.

One dismaying discovery on Who Do You Think You Are? occurs when Naomie finds out her father’s side of the family lived just streets away from her, yet they never met.

In the show she travels to Grenada to trace her paternal family and discovers her four-times great-grandfather James Langdon was manager of the La Sagesse sugar plantation in 1849.

Slavery had been abolished 15 years earlier, but a controversial system began whereby ‘liberated Africans’ were taken to the Caribbean to work on British plantations. 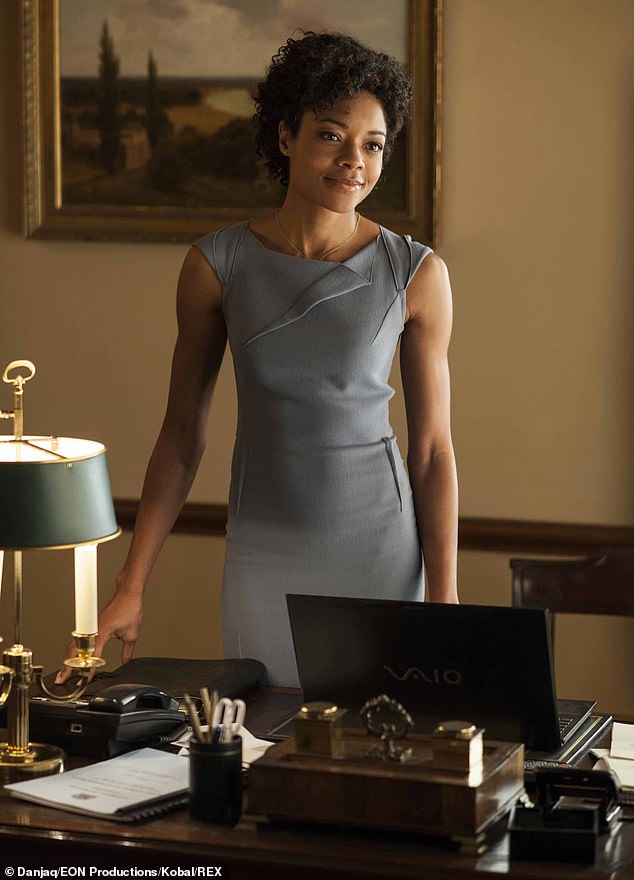 Naomie Harris, who’s reprising her role as MI6 secretary Eve Moneypenny in the forthcoming Bond movie. Pictured, in the role in 2012’s Skyfall

They were paid but indentured to the estate for a fixed period, so Naomie’s ancestor was effectively involved in the slave trade – a revelation she finds deeply upsetting, calling it, ‘repugnant and regrettable’.

As she says now, ‘It was a shock, which is crazy because if you come from the Caribbean, you’re going to be involved in slavery in some form, you come from slaves or people maintaining slavery.

‘But I didn’t see it coming. A part of me wanted to reject that side of my history.’

In Jamaica Naomie visited Kingston, where she discovered that her grandfather’s real name wasn’t Joscelyn Harris, but Joscelyn Tulloch and that he had possibly been born out of wedlock (as Naomie remarks on the show, ‘Has my whole life been a lie?’).

She went to Jamaica when she was small and though she remembers little, she learns that her adoring grandfather often looked after her then.

She says, ‘I’d been searching for a missing link in my childhood because my father was absent and I realised I was parented by my grandfather.’

Naomie also finds out her four-times great-grandfather on her mother’s side had been a slave since age six, while her great-great-grandmother died in a poor house.

As Naomie observes, her ancestors worked hard knowing they would not reap the benefits but hoping their children would.

‘They endured so much suffering yet I’ve been so fortunate,’ she says.

‘The show has changed me. I feel more complete.

‘If you don’t know your ancestry, you feel more on your own. But I feel connected to the past.  I didn’t expect it to have such a profound effect on me.’

She watched a preview of the episode with her father, and while she stops short of saying they are close, ‘We’re definitely working on it.’

She has admitted in the past his absence made her wary of forming relationships, and while she never discusses her private life, her previous boyfriends are said to include 12 Years A Slave’s Chiwetel Ejiofor and her former Pirates Of The Caribbean 2 co-star Orlando Bloom.

She may still be with long-term boyfriend Peter Legler, who she has been dating since 2012, but having worked on the tightly guarded Bond films she’s pretty adept at keeping a secret.

For Naomie to be able to trace her history from a Jamaican poor house to the present day, where she is in one of the most glamorous and successful film franchises, marks quite a journey.

‘Seeing what my ancestors went through has ignited my passion to achieve more,’ she says. I wouldn’t be here without their sacrifices.’