Home » Lifestyle » Mystery as 28-Year-Old Man is 'Gruesomely' Killed in Texas — But Authorities Rule Out Murder, Suicide and Animal Attack Mystery as 28-Year-Old Man is 'Gruesomely' Killed in Texas — But Authorities Rule Out Murder, Suicide and Animal Attack

The sheriff and county medical examiner both blamed a mountain lion — but state investigators say there is no evidence of that… or any other animal.

Something killed a 28-year-old Texas man — and authorities are not quite sure what.

On Thursday Hood County Sheriff’s Office responded to a missing persons call in Lipan for Christopher Allen Whiteley, who hadn’t been seen since the early hours of the night before.

Searching a nearby wooded area, Deputies found his body beside a creek, in what was described by Sheriff Roger Deeds as “a very gruesome crime scene.”

The body was sent to Tarrant County Medical Examiner’s Office for an autopsy, where preliminary examination found he had died from an animal attack, most likely a mountain lion.

The Sheriff’s office immediately issued an alert to residents, especially warning those with small children or pets to keep them inside, as there was a possible man-eater on the loose.

They then summoned the Texas Game Wardens and a governmental trapper with the US Department of Agriculture, who specialized in tracking and removing mountain lions, in an attempt to hunt the animal down.

However, the plot twisted on Sunday when the game wardens and the trapper announced that there was no evidence of an attack by a mountain lion… or any other animal for that matter.

“A Unites States Department of Agriculture Wildlife Services trapper also evaluated the evidence and came to the same conclusion as our staff.”

According to the TPWD, fatal mountain lion attacks on people are extremely rare; in the past 100 years, there have been fewer than 30 confirmed deaths due to cougar attacks nationwide, and never in Texas.

While there was a recent confirmed sighting from Rowlett in Dallas County — the first in the the area in at least 20 years, which was caught on camera — that was nearly 100 miles away and is considered “unrelated to this event.”

But Sheriff Deeds stands by what he saw.

“It appears we have two conflicting reports from two agencies that are experts in their field,” his office said in a statement.

“We stand behind the preliminary findings of the Tarrant County Medical Examiner’s Office, that rule out a suicide and a homicide on the death in question.”

He told WFAA he is now collecting pictures and statements from locals who swear they have seen predatory cats in the area before.

“Sightings of bobcats and large cats have been going on [in the area] for years,” Hood claimed. “But this has never happened, where a person was attacked.”

“Now people are coming out and saying, ‘Yeah, I had this happen to me, I heard this, ‘I saw this on the game camera’… So we’re trying to follow up on those instances.”

For now, everyone is waiting of the coroner’s final autopsy to find out who — or what — killed Whiteley.

Until then, Sheriff Deeds is still warning the community to be on the lookout for a killer cat. 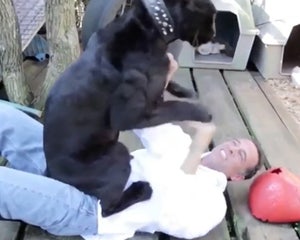