Mum hits back against critics of her babys very unique name 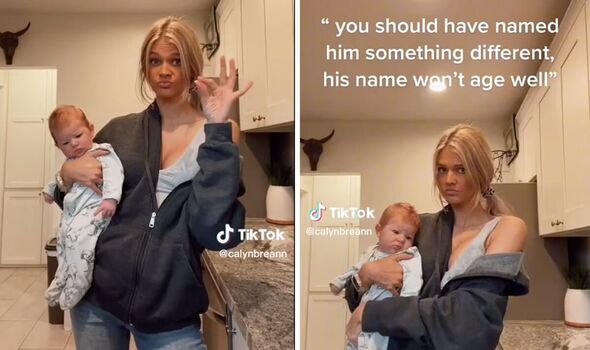 A mum has taken to TikTok to hit back at people who criticise her baby’s name. Calyn Breann, who posts to the account @calynbreann, shared a video of herself and her baby.

She added the caption, presumably a comment she has received: “You should have named him something different, his name won’t age well.”

However, the mum hit back by appearing to play a tiny violin before saying: “I love my baby Coast!!!!!”

Coast is a unisex name denoting the land near the sea. It has been becoming more and more popular since 2020. Most of Calyn commenters seem to love the name. Lilly Baird said: “Coast is such a good name!”

Another said, “Grandpa Coast, sounds fine to me” while user Scotty added, “Great name! People need to get over it, no different than River or Brooklyn.”

Some shared their own unique baby names. Kaleigh Neal said: “I have a Wilder and a Wrecker!” Micah Ann Kimrey wrote: “I have a Coast Wilder that will be three in March and everyone loves his name!!!”

Emily Cunningham said: “My kid has a friend named Coast and he has a sister named Scotia. And a brother named Nova. We live in Nova Scotia.”

Kera Simpson and: “Wait Coast is actually really cute.” Cheyenne King said: “Coast is so unique. I’ve never heard anyone be called that before so I think it’s a very good name.”

One wrote: “‘I really love the name too. I like names that aren’t run-of-the-mill. A unique name is definitely not so bad.”

“I think the goal should be for him to love his name,” another said.

Another wrote: “I personally don’t like the name, but it’s your child, and as someone who gave their child a unique name, who am I to judge?”

Another mum shared how she cried every day for the first six months of her son’s life because of his name. Mairéad is a content creator and parenting influencer who shares the details of her life on her TikTok account, @thesteveos.

She told followers she picked a different name for her son than her favourite because a friend had already chosen her preferred name.

She said: “My husband and I became so paranoid that if we used that name, they would think we were copying them. So we settled on a common name that nobody else had used.

“For the first six months, I think I cried almost daily over my decision, I regretted it so much. I just didn’t think he suited that name. We didn’t even get a congratulations from the family that we were so scared of copying.”

What were the most popular baby names of 2022 in the US?