Mother whose toddler son’s cleft palate has been corrected

A young mother is celebrating her beautiful boy’s winning smile, thanks to skilled surgery to repair a cleft palate.

Megan Thompson, 21, from Erdington, Birmingham, reveals how her son was diagnosed with a bilateral cleft lip and palate – a split in the upper lip and roof of the mouth on both sides – while in the womb.

He inherited the condition from Megan –  who was also born with it and has since had seven operations to correct it.

George had a wide hole under his nose, leaving him unable to breast feed and with hearing loss in one ear, when he was born on April 23rd last year.

Thankfully – now aged 16 months, George has had two successful surgeries, one at five months and a second at 11 months. 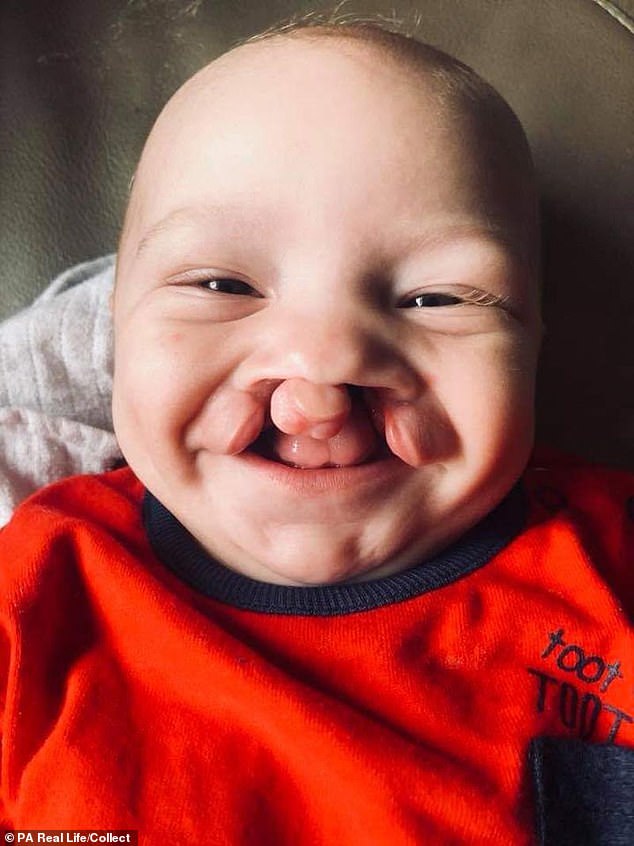 George had a wide hole under his nose, leaving him unable to breast feed and with hearing loss in one ear – when he was born in April 2018 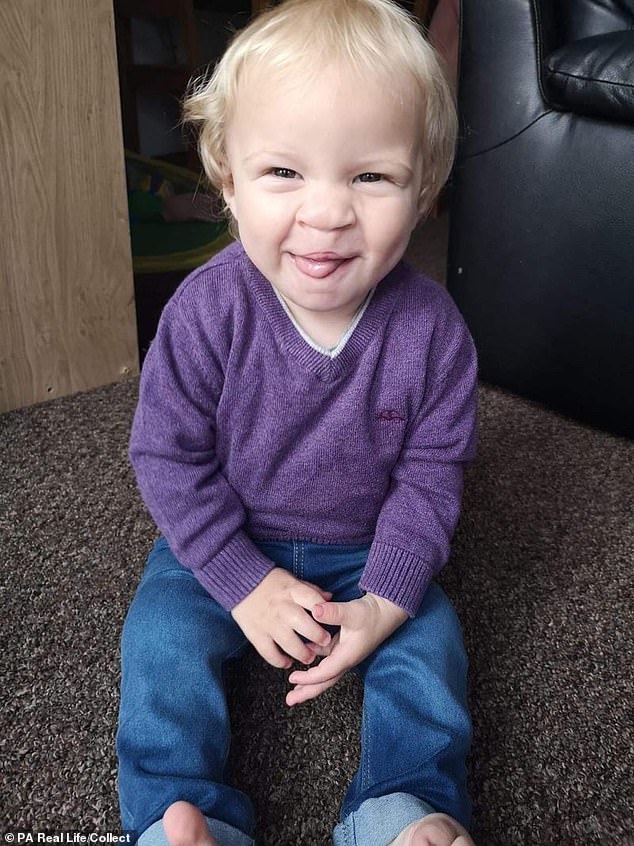 Now aged 16 months, George has had two successful surgeries, one at five months and a second at 11 months

Megan said: ‘He’s thriving now and seeing him smile for the first time after the surgery was amazing. He seemed so much happier. He was like a different baby.

‘I had my first operation when I was three months but I was still badly bullied for having a cleft palate as a child – to the point where I had to change schools – and I really didn’t want that to happen to him.

‘Most people would be friendly when they saw George before his operations, but I will always remember being in the doctor’s surgery when an old man came up to me and said, ‘When are you going to fix his face?’ 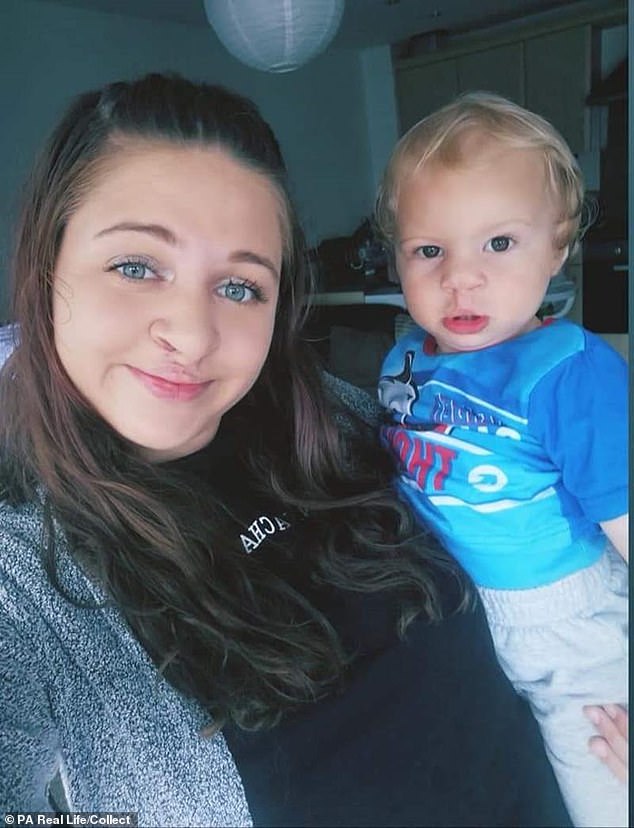 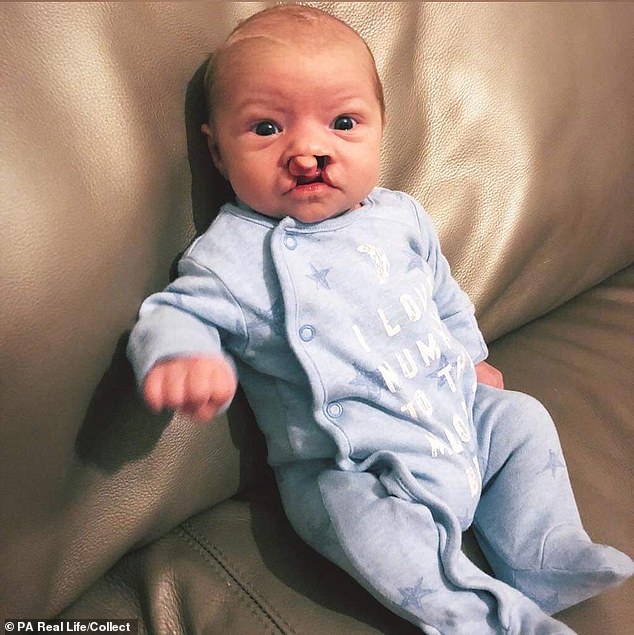 ‘It was mortifying. I try not to be defensive because lots of people are not aware of cleft, so I explained that he was having his lip repaired but he did not need to be ‘fixed’ because he was never broken.

‘Appearance is important, but the main consequence of leaving a cleft lip and palate like George’s would be the effect on his speech and how he eats.’

Megan found out at her 20-week scan that George would be born with a bilateral cleft lip and palate – a condition which, according to the NHS, affects around one in 700 babies and occurs when the parts of the baby’s face do not join together properly during development in the womb.

In around two to eight per cent of cases, as with George, it is hereditary. 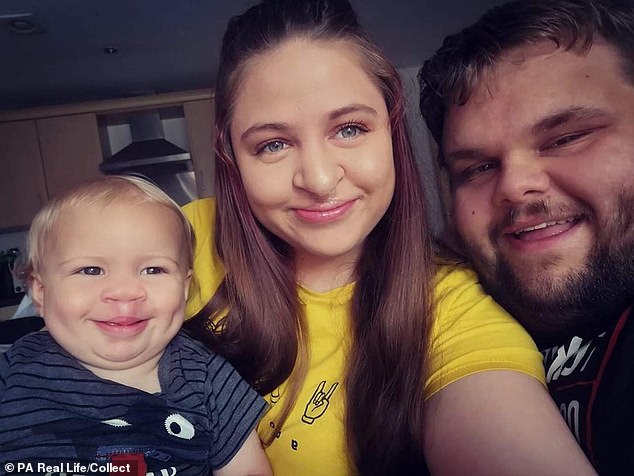 George with his mother Megan, a carer, and his father, Tommy Wykes, 23, a factory worker 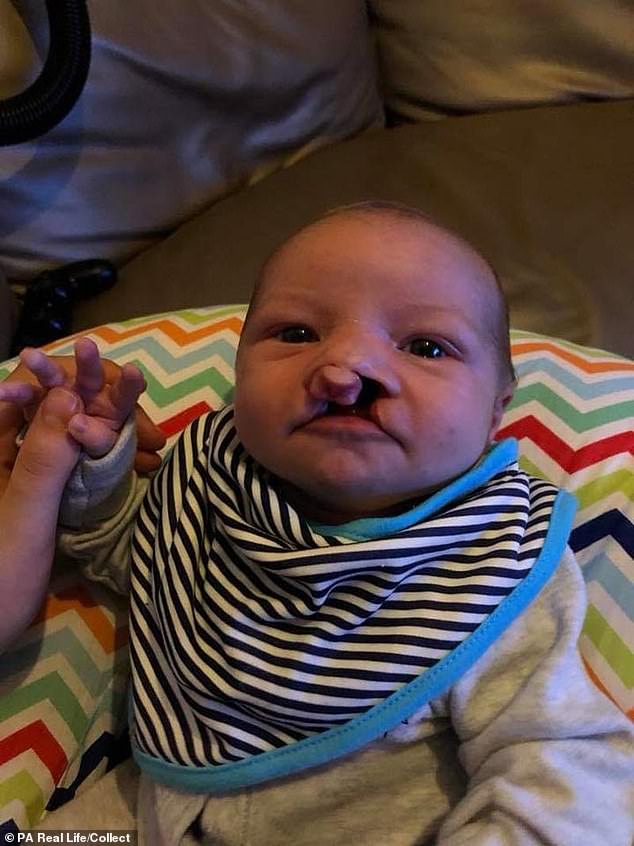 George, when he was first born and before his operation. Megan found out at her 20-week scan that George would be born with a bilateral cleft lip and palate

‘I was really upset when I found out, because I felt like it was my fault. I had never seen a cleft baby before, so was worried about whether I would be able to look after him too,’ Megan said.

‘But when he was born all my fears just disappeared. I thought he was the most beautiful thing. Tommy and I were really happy.

‘Because it was a bilateral cleft palate, he could not breastfeed, which was upsetting because it was something I really wanted to do. 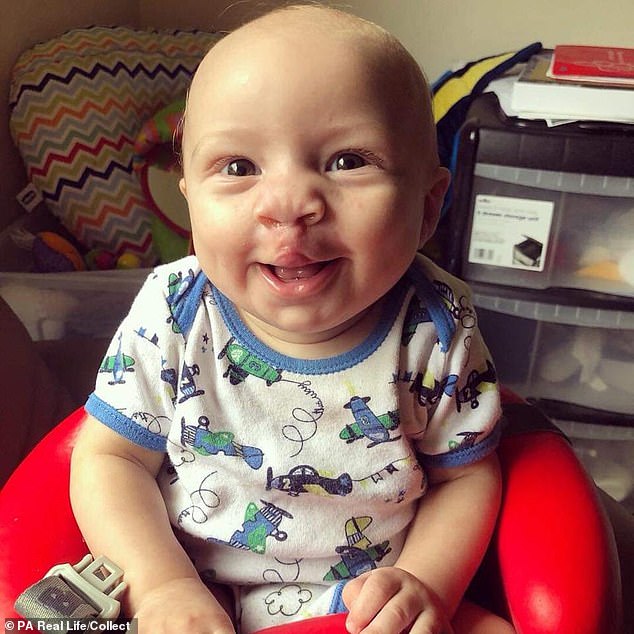 In around two to eight per cent of cases, as with George, it is hereditary. Pictured – after the surgery 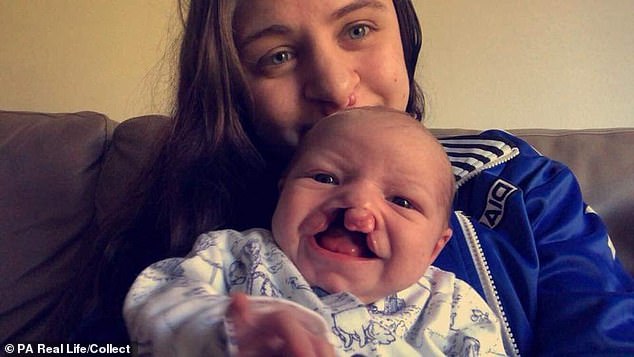 George before his operation with Megan – she said that despite everything, George was such a happy baby

‘I was able to express milk and used a special bottle, where you had to squeeze it into his mouth rather than him sucking it.’

George also had bad acid reflux, where the stomach acid travels up towards the throat, causing heartburn, until he was six or seven months old and, as he grew, some food like yoghurt would come back out of his nose, which he found uncomfortable.

He also suffered with glue ear on his left side – a build-up of fluid which can affect hearing – something which cleft palate babies are more prone to.

George also had bad acid reflux, where the stomach acid travels up towards the throat, causing heartburn, until he was six or seven months old. George pictured after his second operation

Megan said: ‘Despite everything, George was such a happy baby, you would not think there was anything wrong with him. His smile was amazing even before his surgery.

‘He had his first operation at Birmingham Children’s Hospital at five months old.

‘I had the operation when I was young, so I knew that George would have it too.

‘I knew that if he didn’t it would affect him later in life, not just in the way he looked, but with his feeding and speech. 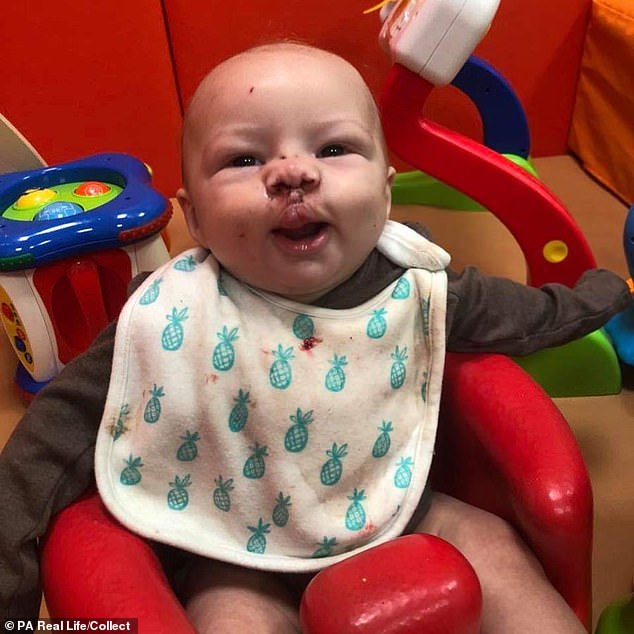 A bilateral cleft lip and palate is a condition which, according to the NHS, affects around one in 700 babies. Pictured: George just after his first operation

‘The first operation took about five hours. He was so small and had to have a general anaesthetic and obviously, babies don’t understand what is going on, so he was trying to fight the anaesthetist.

‘I was so used to his lip being split in two, but they pulled the two sides of his face together and the result was brilliant.’

George’s face was swollen for about a week, following his first bout of surgery, and he needed liquid morphine and ibuprofen for the pain for two weeks.

But the results were incredible.

‘He looked amazing. He looked so much more comfortable. The reflux was a lot better as well,’ said Megan.

Then, at 11 months, George had a three-hour operation to repair his soft palate, where he had a gap in the roof of his mouth, which was stitched together. 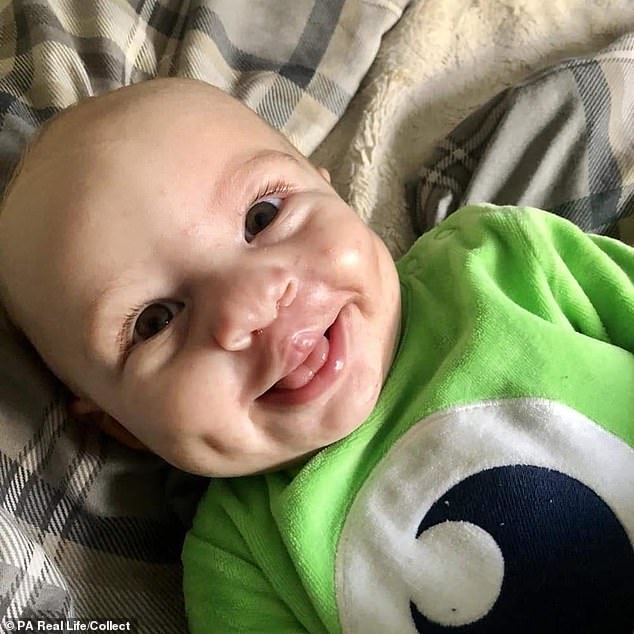 George can now do anything a normal baby could do. And his mother wants people to know it is not the end of the world to have a cleft baby

‘Two months after his second operation, he was able to drink out of a normal bottle,’ continued Megan.

‘When he is eight or nine years old, he will have to have a bone graft, where surgeons will take bone from his hip or knee to strengthen his palate on the roof of his mouth.

‘I also had that surgery at eight years old, which is the first operation I can remember. I had seven or eight operations altogether.

‘As he gets older, it will be up to him if he wants more operations to change his mouth cosmetically. 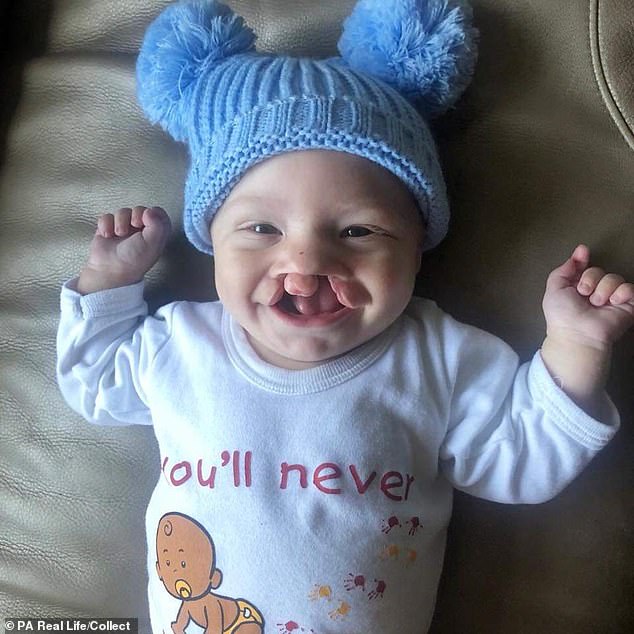 Megan admits that the first operation on George took about five hours. Pictured – before his operation

‘But for now he’s a happy boy, who likes climbing into everything. He was walking at nine months and he always wants to go in places he’s not allowed to.

‘He loves playing with his cars and loves Peppa Pig. Before the operation, I was scared to do baby led weaning, but now he can eat more finger foods than he did before.

‘I worried he would get stuff stuck in his palate, because it happened to me at the age of 10, when I got a carrot stuck in my palate and my stepdad had to come down and dislodge it.’

Now Megan, who has previously raised £400 for CLAPA, a voluntary organisation helping those with and affected by cleft lip and palate, wants to raise awareness of the condition.

‘I want to raise awareness of cleft palate, because there is some negativity around it and people make out it is the worst condition ever, but it is not.

‘George could do anything a normal baby could do. I just want people to know it is not the end of the world to have a cleft baby.’

Who is Flume? Aussie DJ and producer who performed x-rated sex act on stage at Burning Man festival