Mother-of-two in her 30s asks if she’s wrong to LEAVE her husband, 47, for a younger man because he doesn’t want more children due to money worries

A woman who is considering leaving her husband because he doesn’t think they can afford to have more children, has been urged to consider the impact the decision would have on the two kids they already have together.

Posting anonymously on Mumsnet, the mother-of-two who lives in the UK, explained her husband agreed that they would have up to four children in the early stages of their relationship.

However, their circumstances have since changed, and he no longer thinks it’s feasible.

She said the 47-year-old is continuing to support teenagers from his first marriage and their finances have been impacted by a failed business. The woman also added that it took them some time to conceive their two children, and she experienced a stillbirth with their first child.

Responses to the post urged the mother-of-two against breaking up her family in the hopes of pursuing her dream of having more children with a younger man. 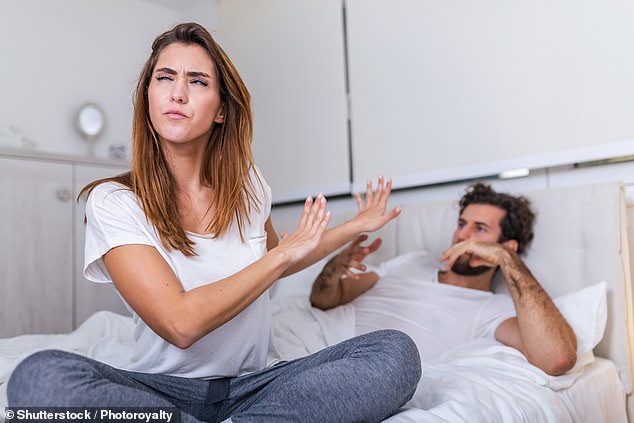 Sharing her desires, the mother-of-two wrote that she know she should be grateful for the two happy and healthy children she has, but she admitted: ‘My heart aches for more children. My chest actually tightens when I think about how much I’d like another baby.’

She said her husband is turning 48 soon and she’s in her earlier 30s, but it’s finances that’s worrying him rather than age.

‘He’s worried about the cost and how long he’s going to have to work to afford everything and everyone,’ she explained. ‘He has older teens from his first marriage that he also supports.

‘In the early days of our relationship we had agreed we’d like two to four children, but time and money weren’t on our side.

‘It took a few years for me to get pregnant only for that to end up with a late loss, then add on a few more years to conceive and have DCs one and two. Throw into the mix a business failure and DH having to start again from scratch money-wise.

‘I want more children so badly that sometimes I contemplate leaving my husband and finding someone younger to have children with. I know I sound ridiculous.

‘Just wondering if anyone has been in a similar position and did they just “get over it” or carry that yearning around for years? For context my youngest is almost two.’ 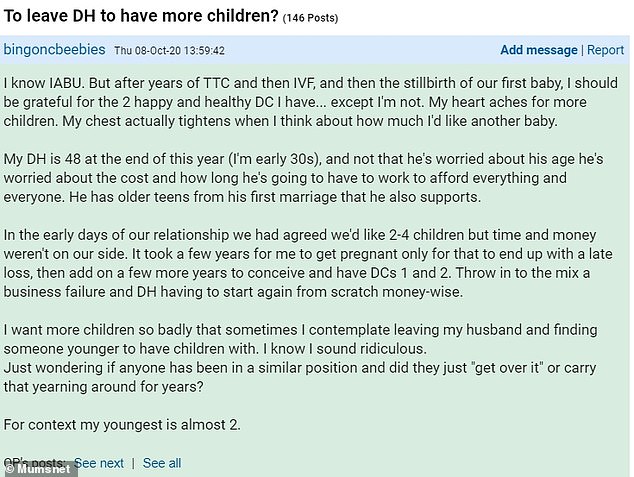 Posting anonymously on Mumsnet, the mother-of-two explained her husband is concerned that they won’t be able to afford having any more children

A stream of responses urged the mother against ending her marriage for a dream that she may never achieve.

One person wrote: ‘It would be extremely selfish of you to break up your existing children’s homes, even if there was a guarantee you could get another. All that would end up happening is everyone would be miserable.

‘Your older kids would resent any new ones, they’d probably resent you for reducing their quality of life and not putting them first, and that in turn would impact you.’

Another said: ‘I actually find this incredibly disturbing. A person who is willing to destroy the lives of her partner and children in her pursuit of her own goals is not someone who should even be contemplating having more children.

‘Your inability to put your existing children first is a strong indicator that you really are not in a good place to be thinking about having more children, let alone blowing up your life in order to do so.’ 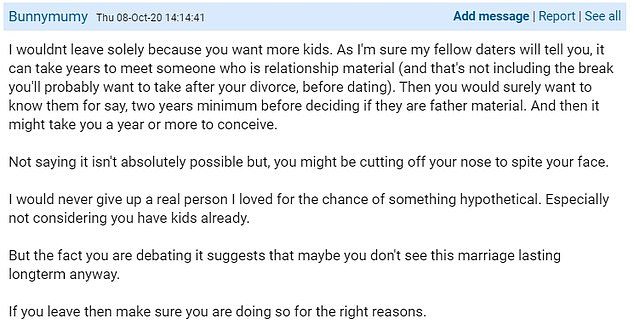 Others argued the mother-of-two who is in her early thirties, is too young to have to settle for a life that she’s unhappy with.

‘I think if your drive to have more children is that strong then you should leave him and pursue that, bearing in mind anything could happen and you could end up with having no more, but also having lost him,’ wrote one.

Another said: ‘You are too young to settle for something you don’t want. If it will make you happier to leave then do it.’

A third added: ‘You do have choices, it’s just that they come with consequences not just for you but your husband and the two children you share. You could leave. That’s a choice. You just need to decide if it’s a choice you want to make.’