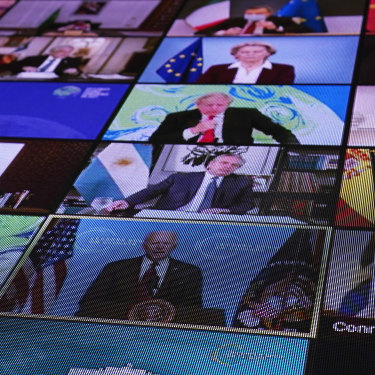 For a man who once infamously and approvingly waved a lump of coal on the floor of Parliament, Scott Morrison made a remarkable concession this week.

To many, his concession was a statement of the obvious. It has been said for years, again and again, by business leaders, economists and climate change experts. But hearing it from the Prime Minister was different. 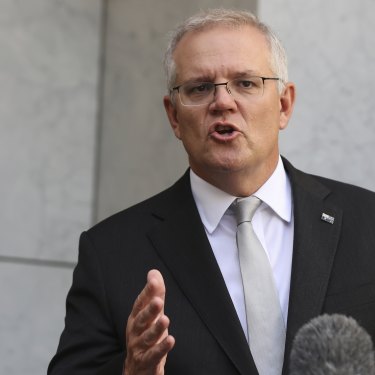 What comes next is a tightrope Scott Morrison has no choice but to walk.Credit:Alex Ellinghausen

“We cannot pretend the world is not changing,” he said, announcing part of a $1 billion package to further develop clean energy technologies. “If we do, we run the risk of stranding jobs in this country, especially in regional areas.”

Those comments are something that successful Labor state premiers, such as Victoria’s Daniel Andrews, have been saying for years as they attempt to move beyond the climate debates that have toxified the national discussion for more than a decade.

But for Morrison, who has seen several Liberal leaders torn down during the energy wars, it was a deliberate signal to workers across the country that a revolution is coming. And it was careful to avoid the “wipe-out” messages of past conservative leaders.

Since the deadly bushfires raged during the summer of 2019-20, Morrison’s language on all things climate has week by week, subtly yet obviously, shifted. Many climate change experts argue the substance of the government’s policies on climate has barely budged, but the rhetoric – powerful from a prime minister – has changed.

The Australians who would never vote for Morrison might not have even noticed and if they did it’s doubtful they would give him credit. But for others, many of them living in the outer suburbs and the regions, who can be spooked by climate activists’ doomsday messages, the shift has been so gradual that it’s now mainstream. Some of these people also sit on his government’s backbench.

In the past 12 months, the debate has gone from “should the nation aim for net-zero emissions by 2050” to “how can it be achieved”. Even Nationals MP Barnaby Joyce, who once catastrophised a carbon tax would result in $100 lamb roasts and has been central to killing off energy policies in the past, has an open mind if he is presented with the details of how to get there.

Even before the bushfires, Morrison has attempted to convince the majority of his colleagues that coal-fired power is not long for this world. For the most part, through an economic argument, he has succeeded. The declaration at this week’s climate summit from Japan and South Korea – two of the world’s biggest coal financiers and consumers – to stop investing in coal-fired power plants will only help the cause.

What comes next is a tightrope Morrison has no choice but to walk. The election of Joe Biden as US President in November was a seismic shift and there is an economic, electoral and diplomatic reality about climate change. Jobs, economies and long-standing international relations rely on every nation’s ability to dramatically reduce carbon emissions.

Two of Australia’s closest and most reliable allies, the United States and Britain, are leading global efforts to use the economic recovery from the coronavirus pandemic to lift short-term targets and commit to reaching a net-zero target by 2050 and deep cuts by 2030. Biden used his global summit on Thursday night to set an ambitious new target of a 50-52 per cent cut in America’s emissions by 2030 based on 2005 levels. It is a mighty commitment for a nation that has paid little attention to transition in the past four years.

Boris Johnson, a conservative pin-up boy who has transitioned into the world’s leader on climate commitments, is aiming to reduce annual carbon emissions by 78 per cent by 2030, compared with 1990 levels, come what may. Both governments have made it clear to Australia that it must show more ambition than its 26-28 per cent emissions reduction target from 2005 levels by 2030. Japan and Canada have set bold new targets too, although the Australian government this week was quick to point out that they haven’t kept their previous promises.

Morrison is determined his mantra will be “deeds not words” and has repeatedly said Australia’s targets will be set at home and not influenced by foreign powers. But against this show of sovereignty, there is an admission behind the scenes that Australia must overhaul its international reputation as a climate laggard if it is to ask allies for assistance when it comes to regional security in combating an assertive China in the Indo-Pacific.

Part of the challenge is that if Australia is to ask the leaders of Pacific nations to reject buckets of cash on offer from Beijing then it must prove it is listening and acting on their climate concerns. Perhaps the most important element to a politician such as Morrison is that an increasing number of voters in Liberal-held seats care about the climate.

Lost in the euphoria of its 2019 election victory was a warning that in order to win the next election in 2022, the party would need to seek to gain seats rather than just hold the ones it has. A campaign review recommended a particular focus in Victoria and to some extent NSW.

“Unless the party rebuilds and recovers lost ground in Melbourne and surrounding areas, its path to victory in each election will remain worryingly narrow,” the review said.

Less publicly, the party’s federal director, Andrew Hirst, had a warning for cabinet ministers who were swept up in Morrison’s May Miracle. In the weeks following the Coalition’s victory, Hirst was invited to present his findings to cabinet about why and how the government had won re-election.

He said the result was largely due to economic reasons, those seated around the table recall him saying, and the victory should not be misrepresented. It had not been a referendum on climate change, as some had billed it.

But Hirst – who experienced the decade of the Coalition climate wars as a senior aide to both Tony Abbott and Malcolm Turnbull – told the room global warming remained a significant issue to many voters, especially in inner-city electorates, and the party remained vulnerable on the topic.

Several people who were there, and cannot speak publicly because they are bound by cabinet confidentiality, said a discussion followed that if the government was not going to dramatically alter its policies, it needed to better communicate what it was doing to lower emissions. 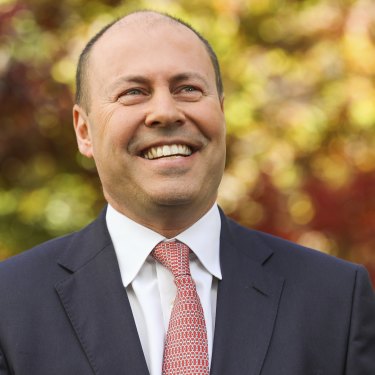 Treasurer Josh Frydenberg has been among the loudest voices to make a visible shift on climate.Credit:Alex Ellinghausen

Within his cabinet it has been Treasurer Josh Frydenberg who has been among the loudest voices to make a visible shift on climate. Himself an inner-city MP, he knows how the issue can threaten the party among well-off voters with post-materialist values.

On an economic level the regulators he oversees, such as the Australian Prudential Regulation Authority, are telling banks, insurers and super funds to limit their exposure to customers at most risk from climate change.

But it is Angus Taylor, a conservative MP not previously disposed to renewable energy and a critic of past Coalition energy policies, who has earned the respect of some colleagues for being willing to walk the same path as Morrison.

“I think he was originally given the portfolio to punish him, but he is convincing like-minded colleagues of its merits,” one MP said on the condition of anonymity. “Apart from one or two outliers, the party room is reasonably comfortable with the path we are taking. And not long ago who thought that would be possible?”

Whatever his own views the science of a changing climate, Morrison the pragmatist has little option other than to confront the climate challenge. But, as he told world leaders on Thursday night, he won’t be adopting any new targets just yet. He wants to assure his skittish colleagues and a considerable chunk of voters that it will be in their best interests to let him be the one to oversee the shift.

“Future generations … will thank us not for what we have promised, but what we deliver,” he told Biden’s summit. “And on that score Australia can always be relied upon.”

Amid warnings the Paris Accord target of holding warming to 1.5 degrees above pre-industrial levels cannot be achieved unless there is sharp lift in efforts to reduce emissions, colleagues hope Morrison’s climate conversation has not come too late.

What You Didn't See! Arissa Shares What Really Led Her to Quit 'All Stars'
Recent Posts