Federal officials raced to spend $389 million on commuter car parks the day before Prime Minister Scott Morrison called the last federal election in a move slammed by the Auditor-General for failing to safeguard taxpayer funds.

Mr Morrison decided the 27 projects despite an “inadequate assessment” of whether they were eligible for cash under a controversial program that helped Liberal candidates campaign in marginal seats. 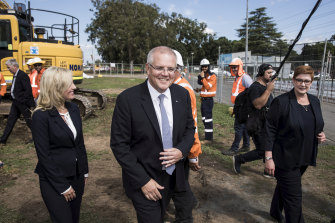 Labor damned the program as a “rort” and vowed to use Parliament to investigate how the money was spent after the Auditor-General found 77 per cent of the projects were in Coalition electorates.

While the overall program cost $660 million, more than half the total was allocated in a single day amid widespread speculation Mr Morrison was about to call the 2019 election.

Federal officials confirmed Mr Morrison decided the funding for the 27 commuter car parks on April 10, one day before he visited the Governor-General in Canberra and announced the election would be held on May 18.

“These projects were subsequently publicly committed to during the election campaign,” officials from the Department of Infrastructure told the Australian National Audit Office.

But the ANAO rejected those claims and said the 27 projects deserved to be treated as formal decisions by Mr Morrison and his ministers, given the money was allocated before the government went into caretaker mode.

The department’s view is also at odds with comments from government candidates during the election campaign, with Liberal MP Lucy Wicks announcing a car park in her electorate of Robertson with the claim that the move was not an election commitment because the money was included in the budget.

The key decisions on the program were made in the months leading up to the election when advisers working for the Minister for Urban Infrastructure, Alan Tudge, shared spreadsheets with the Prime Minister’s staff to rank dozens of potential car parks to be built near city train stations.

Rather than calling for applications, the government designed the scheme so Mr Tudge would identify projects after engaging with others, including members of Parliament.

“The department did not put in place a process for engaging with states and councils on the identification of candidate projects,” the audit report said, adding that consultation only began after federal ministers named the sites.

Labor likened the program to the “sports rorts” scheme that put federal money into local sporting facilities and ignited a political fight that forced the resignation of former sports minister Bridget McKenzie in February last year.

Senator McKenzie was restored to cabinet as Minister for Regionalisation in a reshuffle of Nationals’ positions announced on Sunday.

Labor described the car park scheme as “sports rorts on steroids” because it was larger than the $100 million sports program but also used a series of spreadsheets in ministerial offices to decide where money was spent.

“That’s why, frankly, we see the incompetence that has characterised this program’s delivery with only two projects completed and six abandoned, showing they never should have been proposed in the first place,” said Labor urban infrastructure spokesman Andrew Giles.

“And that’s why we see such an uneven distribution of these projects.

“We will be taking every step to get to the bottom of this rotten scandal and to expose the warts at the core.”

Urban Infrastructure Minister Paul Fletcher, who took over from Mr Tudge in December 2020, rejected the Labor claims and said Mr Giles was trying to score a “political hit” over the program.

“The Auditor-General report makes it clear there’s authority for these ministerial decisions under the Land Transport Act,” Mr Fletcher said on ABC TV on Tuesday morning.

“There’s no suggestion that decisions made by ministers were outside of authority.”

The audit found that none of the project sites were proposed by the department, 64 per cent were located in Melbourne and 77 per cent in Coalition electorates.

While 23 per cent of the projects were in Labor seats, the government announced car parks in areas it later won at the election, with three car parks promised in the electorate of Lindsay surrounding Penrith in western Sydney.

“Not a single one in Melbourne’s western suburbs, despite it including some of the fastest-growing parts of the country,” Mr Giles said of the scheme.

“Only one in suburban Perth, none in Adelaide, twice as many in Melbourne than in Sydney, it just doesn’t add up if it was allocated on any basis other than political decision making.”