The Food and Drug Administration on Tuesday issued an encouraging briefing document about the Moderna COVID-19 vaccine ahead of a meeting by experts on whether to grant it emergency approval.

The FDA was upbeat on the vaccine, saying there were “no specific safety concerns identified that would preclude issuance of an EUA (Emergency Use Authorization)” and confirmed an overall efficacy of 94.1%.

Hundreds more U.S. hospitals will begin vaccinating their workers Tuesday as federal health officials review the second COVID-19 vaccine needed to boost the nation’s largest vaccination campaign. Packed in dry ice to stay at ultra-frozen temperatures, shipments of the first vaccine from Pfizer are set to arrive at 400 additional hospitals and other distribution sites, one day after the nation’s death toll surpassed a staggering 300,000.

A panel of outside experts will offer their recommendation on the Moderna vaccine on Thursday, with a final FDA decision expected soon thereafter.

Because the vaccine requires two rounds, the people getting injections now will need a second shot in about three weeks.

The first 3 million shots are being strictly rationed to frontline health workers and elder-care patients, with hundreds of millions more shots needed over the coming months to protect most Americans. Shots for nursing home residents won’t begin in most states until next Monday, when some 1,100 facilities are set to begin vaccinations.

The federal government is coordinating the massive delivery operation by private shipping and distribution companies based on locations chosen by state governors.

Following another initial set of deliveries Wednesday, officials with the Trump administration’s Operation Warp Speed in Washington said they will begin moving 580 more shipments through the weekend.

“We’re starting our drumbeat of continuous execution of vaccine as it is available,” Army Gen. Gustave Perna, chief operating officer for Warp Speed, told reporters Monday. “We package and we deliver. It is a constant flow of available vaccine.”

Perna and other U.S. officials reiterated their projection that 20 million Americans will be able to get their first shots by the end of December, and 30 million more in January.

That projection assumes swift authorization of the vaccine up for review this week, co-developed by Moderna and the National Institutes of Health. Like the Pfizer-BioNTech vaccine, Moderna’s requires two shots for full protection.

Last month, Moderna and NIH reported that their shot appeared to be nearly 95% effective across various ages and racial groups, according to results from an ongoing 30,000-person study. The main side effects were fatigue, muscle aches and injection-site pain after the second dose. Those flu-like reactions are common to many vaccines and are a sign the vaccine is revving up the immune system to help fight off the virus.

Moderna reported no major safety problems from its study. But the FDA’s panel is certain to scrutinize the data for any indications of possible severe allergic reactions or other rare side effects. Officials in the U.K. are investigating several adverse reactions there to Pfizer’s vaccine and the FDA is closely monitoring the rollout here for similar reports.

Both Moderna’s and Pfizer-BioNTech’s shots are so-called mRNA vaccines, a brand-new technology. They aren’t made with the coronavirus itself, meaning there’s no chance anyone could catch it from the shots. Instead, the vaccine contains a piece of genetic code that trains the immune system to recognize the spiked protein on the surface of the virus.

The first vaccine deliveries have provided a measure of encouragement to exhausted doctors, nurses and hospital staffers around the country. 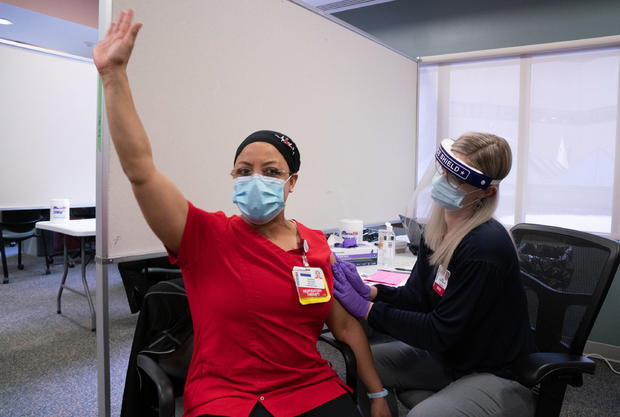 “I can feel relief now, I know we still have a long road ahead of us, but I can see that light at the end of the tunnel now,” nurse LaShawn Scott of the University of Louisville Health remarked to CBS News. “I’m saving lives by getting this vaccination.”

Sandra Lindsay at Long Island Jewish Medical Center in New York, got her first shot ‘s just after 9 a.m. ET Monday, making her among the first in the country to receive the authorized vaccine.

“I hope this marks the beginning of the end of this painful time in our history. We’re in a pandemic, so we all need to do our parts,” she told CBS News.

For Dr. Tina Wu of NYU Langone Health, the vaccine is more than just a shot, it’s a prescription to get back to normal. “I haven’t hugged my mom in 10 months out of fear. Now, I finally can,” she said to CBS News.

Johnnie Peoples, a 43-year-old survival flight nurse, was excited and a little nervous Monday afternoon as he unzipped his flight suit and stuck out his left arm to become the first person to receive the vaccine at the University of Michigan Medical Center in Ann Arbor.

In Florida, government officials expect to have 100,000 doses of the vaccine by Tuesday at five hospitals across the state.

“This is 20,000 doses of hope,” said John Couris, president and chief executive officer, Tampa General Hospital, after the delivery of 3,900 vaccine vials on Monday. Each vial has five doses.

Who is Pierry Kiely and does he have a girlfriend? – The Sun