MISS MONEYSAVER: The small changes that can make big savings to beat the curse of shrinkflation this Christmas

Have you noticed that not only is everything getting more expensive, it’s also getting smaller?

How many times have you opened a packet of crisps or a bar of chocolate and thought to yourself: ‘I’m sure there used to be more in here.’

A friend of mine was recently given a big box of Maltesers and she’s convinced there were far fewer chocolates in there than there used to be. And have you seen how few Quality Street chocs you get now in those Christmas tubs? I remember a time when opening a Christmas tin of your favourite sweets was exciting. You had to be careful not to spill the contents as you prised off the lid.

Last week, I was chatting to one of my MoneyMagpie staff who recently bought some Options hot chocolate only to find that when she opened the jar it was half-full (or half-empty depending on how you look at it). 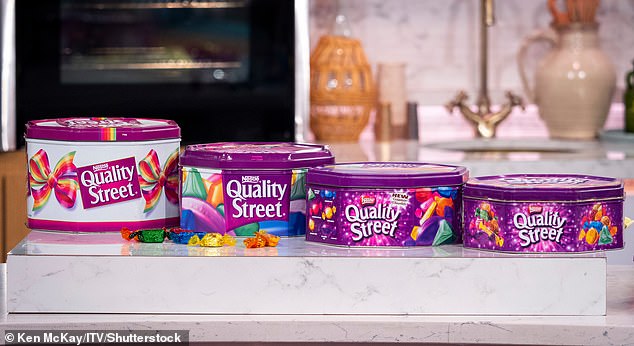 A friend of mine was recently given a big box of Maltesers and she’s convinced there were far fewer chocolates in there than there used to be. And have you seen how few Quality Street chocs you get now in those Christmas tubs?

So what is going on? Well, these are examples of ‘shrinkflation’ — reducing the amount of a product while charging the same price.

While I don’t have an issue with companies doing what they can to survive, especially now at a time when production costs are increasing, what annoys me is the lack of transparency. The whole practice feels really dishonest.

Which? magazine has been on top of this for a few years now. Every year they publish a list of products that have been victims of the dreaded shrinkflation.

Sue Davies, head of food policy at Which?, says: ‘Our research has shown that while some popular products have shrunk over the years, the same can’t always be said for their prices — which ultimately means people end up paying more for less.

‘Supermarkets and manufacturers must be more upfront about the costs of their products and ensure unit pricing is prominent, legible and consistent.’

Quite. In an investigation published by Which? in May this year, examples of ‘shrinkflation’ included the contents of Nescafé Azera Americano decaff instant coffee which shrank from 100g to 90g in Tesco in February this year, even though the price remained at £5.49. That is an effective price increase to shoppers of 11 per cent per 100g.

Similarly, Walkers Classic Variety Crisps went from 24 bags in a multipack to 22 at Tesco, Asda and Morrisons the previous autumn, but stayed the same price.

Equally, there used to be 1,000g of chocolates in a Quality Street tin but that has gradually been reduced to today’s 600g in a tub.

Part of the problem is most of us don’t keep old boxes or packages to compare sizes and contents. Too often we just tut and shrug. Sometimes a company will be upfront about the reductions, but usually it’s up to us, the consumers, to see where we are being cheated.

So, what can we actually do about shrinkflation?

Well one thing you can do is let other shoppers know about it on reviews sites like Trustpilot.com.

A spokesman from the site says: ‘Consumers are not completely powerless in this situation and actually reviews submitted on open platforms like Trustpilot are a great channel for getting your voice heard by businesses — as well as making other consumers aware of the experience you’ve had. Any business hoping to succeed should be making a concerted effort to engage with feedback from customers.’

As well as making your voice heard by submitting reviews, there are other things you can do to try and avoid getting less for your money.

Vicky from my team is a big fan of ‘fill your own’ shops. These places look a bit like the old-fashioned stores our mums and grandmas used to use, with shelves lined with jars and jars of mostly dried goods (like cereals, rice and pasta).

The important thing to remember is that they sell by weight, so you know exactly how much you’re getting for your money. The shop Vicky uses is in York, but there are shops like it in towns all round the country. The Zero Waster website (thezerowaster.com/zero-waste-near-you/) has a handy list.

Shoppers are encouraged to take their own containers from home to fill or refill. If you don’t have anything suitable, then you can often buy recyclable bags or reusable containers from the shop. Vicky says: ‘I wasn’t sure about how it would work at first, but now I use my local “fill your own” shop as often as I need to. So, for example, I always buy my cereal from Bishy Weigh (in York). Rather than spending money I don’t have on expensive branded packaging (as well as only getting half a box full), I take my Tupperware down, fill it with as much as I need and only pay for what I want. I also know exactly what I’m getting because I’ve weighed it myself.’

There are other ways to dodge shrinkflation. Even if we can’t stop manufacturers from charging more for less, we can make sure we get the most for our money.

Firstly, be wary of brand loyalty. I know how much we come to love the brands we’re used to, but it really is worth considering breaking with tradition to make sure you’re getting the best deal. Shop around and try different brands, especially if they are on offer. Lots of supermarket own-brands save on fancy packaging to keep prices low. Even when these prices are going up, they usually still offer better value. Give them a go, you might even find you prefer them.

Another good habit to adopt is to shop around and use price comparison apps. I’ve talked about these before in terms of getting the price of your weekly shop down, but you can also use them to compare the unit size or cost per weight.

Try using an app like Trolley or Priceable. If you put whatever it is you want to check the value of into the search bar, you’ll see that usually under each total price is the cost per gram. These calculations help you get the best value. I got Rachel from my team to do this with hot chocolate after she was shocked by how little there was in her Options jar. She found that Options is a whopping £1.02 per 100g compared to, say, Aldi’s Choceur hot chocolate, which is 30p per 100g — that’s a massive difference.

The prices per gram are also displayed on supermarket shelves, so you can easily do this when you’re out and about, too. Just make sure that you are comparing like for like — sometimes supermarkets change g to kg, for example.

Another idea is to stock up when you see something is on offer, although this is only worth doing if it’s something you already need or will definitely use.

And make sure it’s non-perishable (unless it will go in the freezer).

You can also buy in bulk to get a better deal per item. Wholesalers like Costco are good for that, as are street markets.

And lastly, don’t forget you can often find your staples for much less in the world food aisles most supermarkets have now or at specialist supermarkets. I only buy soy sauce at an Asian supermarket as it is much better value.

Shopping around and being vigilant about how much you are paying per gram will help you beat ‘shrinkflation’ and get so much more for your money.

Have you got a question for Jasmine? Email her at [email protected]

What to eat to keep nice and toasty

A few weeks ago I shared advice on staying warm without putting the heating on, from using hot-water bottles to investing in wool blankets. Now we can add eating certain foods to fire your inner thermostat!

According to the ‘sleep experts’ at Bed Kingdom (bedkingdom.co.uk/), eating nuts before bedtime can increase the speed of your metabolism and raise your body heat. This has the effect of warming you up on the inside. Nuts also contain melatonin, a natural hormone that can help to regulate your sleep cycle. 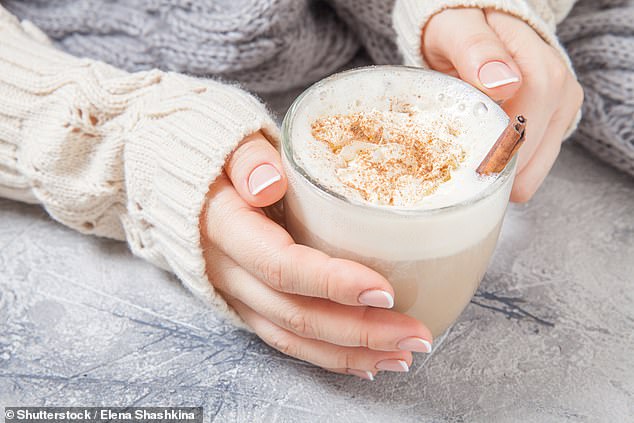 Cinnamon, with its thermogenic properties, can increase your body’s core temperature

Cinnamon, with its thermogenic properties, can increase your body’s core temperature. A sprinkle in a glass of milk at night-time will warm you up and due to the tryptophan in milk — which induces sleep — you’ll also find it easier to doze off.

Ginger can also help you to feel warmer as it has vasodilating properties, which means it can increase blood flow and therefore help your body to heat up. Sprinkle it on food or drink a mug of comforting ginger tea when you feel chilly.

As for what to avoid, steer clear of water-rich food such as cucumber and celery in the evening because they can cool the body down.

See a London show for less this winter

Asda is offering anyone over the age of 60 a bowl of soup, roll and unlimited tea and coffee for just £1. It’s part of a range of ‘Winter Warmer’ initiatives. The offer can be redeemed in any of Asda’s in-store cafes all day every day throughout December.

Italian restaurant Zizzi has launched its Zillionaire’s Club. Customers who join up will be rewarded each time they visit or get a takeout. It works via an app and offers Zillionaires the chance to earn credits (Zs) each time they spend over £10. Zs can be exchanged for ‘perkz’ from the menu.

The Official London Theatre sale started on Tuesday but you can still grab some great deals for the new year (January and February). The Society of London Theatre is making sure everyone can enjoy the shows they love for less. Find tickets to participating shows, like Jersey Boys and The Mousetrap, for as little as £10. officiallondontheatre.com/sale

Most of us will tune in to watch tonight’s football match against France but if you are a diehard fan, some of your memorabilia from previous tournaments could be worth thousands.

According to the team at NetVoucherCodes.co.uk, a Mexico ’86 Adidas ball, for example, could fetch over £2,500 and a pair of Nike Laser III T90s could earn you more than £600!

Programmes can also command a decent price, particularly those which feature an iconic player on the cover or detail a famous match. World Cup Match Attax Player Cards are sought after by collectors too, particularly if the cards have been signed by players. Some are worth more than £150 for a single card. 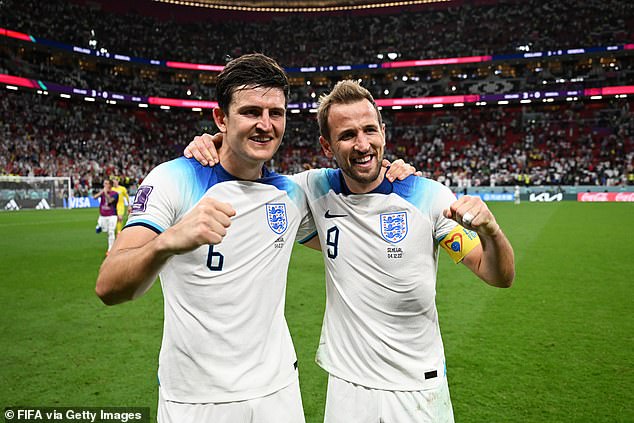 Most of us will tune in to watch tonight’s football match against France but if you are a diehard fan, some of your memorabilia from previous tournaments could be worth thousands

Football shirts such as the one worn by England’s Harry Kane, left, almost always appreciate in value, so it’s worth grabbing one around a big football tournament and keeping it as an investment. The England shirt that was used in the 1980 Euros and 1982 World Cup as the home shirt, for example, can now fetch £450.

Here’s a top tip — if you invest in a shirt from this year’s World Cup, make sure to keep the tags on and keep it in the wrapper as that increases its value.

The Fashion Awards 2022: See all the glamorous photos from London
Recent Posts