Attorney-General Christian Porter’s public denial of allegations of rape has not stopped calls for an independent investigation into the accusation.

Mr Porter rejected the accusation he raped a 16-year-old woman in Sydney in January 1988 and said he intended to remain in cabinet and in his portfolio. He is taking leave to assess and improve his mental health. 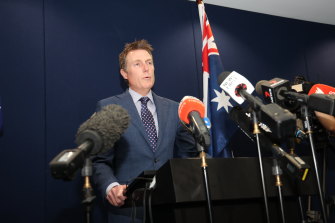 But a women’s legal organisation and crossbench MPs say there are still questions for him to answer and there must be an independent investigation of the matter.

NSW Police said it did not have enough admissible evidence to proceed with an investigation it began in February last year but suspended in June when the woman took her own life.

Police in South Australia, where the woman lived and died, are still investigating on behalf of the coroner David Whittle, who has not yet decided whether to hold an inquest into her death.

The matter became public after Prime Minister Scott Morrison, Labor Senate leader Penny Wong and Greens senator Sarah Hanson-Young were sent an anonymous letter with a dossier of more than 30 pages outlining the allegations. All three referred it on to the Australian Federal Police. Mr Morrison said on Monday he was “briefed on the contents” and before that had heard “only rumours”.

Australian Women Lawyers called for an “urgent independent investigation” into the allegations, which its president said were damaging the credibility of the legal system.

“Until such an investigation is conducted, the question remains as to whether the Attorney is an appropriately fit and proper person to hold that office,” president Leah Marrone said. “This undermines the credibility and operation of the Australian legal system given the community’s expectations of the legal professional and the Attorney’s role in upholding the rule of law.”

Tasmanian independent senator Jacqui Lambie said while she was not judging the truth of the allegations against Mr Porter, his position as both Attorney-General and Industrial Relations Minister was untenable.

“For so long as there’s an untested allegation of this nature hanging over his head, I can’t see how he can do the job with a straight face,” she said.

“You can’t be the minister saying union officials need to be ‘fit and proper people’ while you’re defending yourself against rape allegations. You can’t be making the case for harsher penalties for sex offenders when you’re accused of being a sex offender yourself.”

Senator Lambie believed the only way to deal with the allegations “fairly and transparently” was an independent investigation – a suggestion backed by independent MP Zali Steggall and Senator Hanson-Young.

“We’ve heard now the minister’s version of events. We need to make sure [the woman’s] voice is heard as well,” Senator Hanson-Young told ABC TV.

“How can the Prime Minister front up to the Australian people and tell them he is certain that this person that he has chosen to be in his team should be there when he has not even bothered to look at the evidence that has been presented to him, to help him make that judgment?”

Her colleague Larissa Waters went further, calling on Mr Porter to step aside from cabinet.

Mr Porter has rejected calls for an independent inquiry, arguing it would effectively require him to prove that something “did not happen” decades ago.

But the lawyer who was representing the woman who made the claim, Michael Bradley, said on ABC radio an inquiry would not require Mr Porter to prove a negative but instead assess whatever evidence is available and come to a conclusion.

“That literally happens every day of the week,” he said of such inquiries into the alleged actions of powerful people at a state and federal level.

Labor has not explicitly called for an independent inquiry but opposition leader Anthony Albanese said before Mr Porter’s press conference the idea required “further leadership and action from the Prime Minister . Frontbencher Tanya Plibersek also did not rule it out.

“It is important to keep all of the available options on the table to ensure that people have faith that the First Law Officer of Australia is actually above reproach,” she said.

Dhanya Mani, who in 2019 became a close friend of the woman who accused Mr Porter, was scathing of the minister for not having seen the full allegations, despite discussing the matter with the Prime Minister.

“It reflects on the attitude of the Attorney-General, the chief law officer in the country … if he claims that he didn’t look at a full copy of the allegations, why didn’t he ask to see one?” she said.