It helps to have advance warning when a bomb goes off in your city, and so it was on Wednesday when Victoria Police ensured people at the northern end of Russell Street that the explosions they’d hear throughout the day were just play-acting for a TV series. Nothing to see here. Move along.

Of course, that wasn’t the case on March 27, 1986, when a bomb planted in a parked car outside the then Police headquarters – which is now an apartment complex for the over-55s – exploded, tearing a hole in the Art Deco building, killing policewoman Angela Taylor, and injuring 22 others. 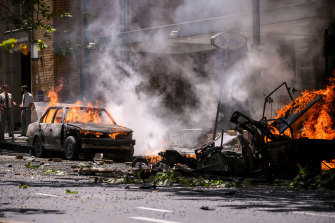 The Russell Street bombing of 1986 was dramatically recreated in Melbourne on Wednesday for the ABC TV series The Newsreader.Credit:Eddie Jim

Michael Lucas, the creator of the ABC series The Newsreader, was only seven years old at the time. But, he says, “it made a huge impact on me. It was just such an unprecedented sort of catastrophe, and to think that it happened right in the middle of the city.”

In recreating it as one of the pivotal moments of his six-part series, he says, “there’s a real obligation to do it justice” – and shooting it precisely where it happened is a big help.

The Russell Street bombing is just one of the major news events from 1986 that the series will capture; the others include the Challenger space shuttle disaster, the Lindy Chamberlain trial and Chernobyl. 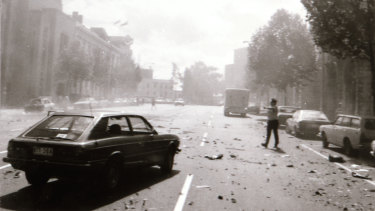 A police officer on the street in the immediate aftermath of the explosion outside of the Russell Steet Police Station in March 1986. Credit:

It’s not just that it was a big year, says co-producer Joanna Werner. It’s also that the period setting allows for an exploration of workplace dynamics that are, quite literally, from a different age.

“That world of journalism is just so compelling, and the relationships of the people within that world were so heightened in 1986,” she says. “Sexism, issues of sexuality, mental illness – they’re just exacerbated so much compared to where we are now, so it seemed incredibly exciting.” 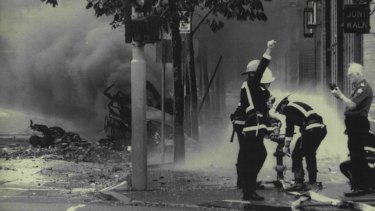 Firefighters on the scene in 1986.Credit:

The period setting also poses some technical challenges, like finding Betamax cameras and tape on which to shoot the news segments. It also means dragging a couple of ancient fire trucks out of the museum for this particular scene.

Looking after one of them is Graham Duncan, who spent 38 years in the Metropolitan Fire Brigade and was one of the first responders to the blast back in the day. He rates the recreation pretty spot-on – “except there were no trees down the middle of the street then” – but there’s little chance of him being re-traumatised by it. 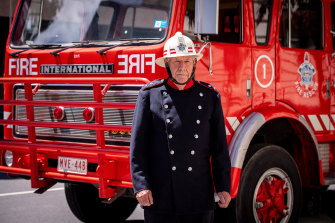 Retired firefighter Graham Duncan, who was an extra on Wednesday, was among the first responders to the explosion. Credit:Eddie Jim

“Chemical fires were much worse,” says the taciturn 80-year-old. “It was hard to breathe, your eyes burned, you’d have a shower days later and smoke would still be coming out of your skin. It gets right in there.”

There had been other bombings in Australia before Russell Street – Duncan says he was called out to three during his career – but Lucas thinks this one left the biggest mark.

“The difference is that the news crews were close by so they were here really quickly, it was on the news that evening, and everyone saw it,” he says. For better or worse, he adds, “now every incident is preserved on a bazillion phones.”