Home » Lifestyle » Meet you under the colour-field: bold art coming to a station near you Meet you under the colour-field: bold art coming to a station near you

Commuters travelling through the new Parkville underground railway station will be whisked away into the natural world if Patricia Piccinini has her way. As one of five artists creating works for Melbourne’s new stations as part of a series commissioned by Metro Tunnel, Piccinini is working on a massive piece that reflects the colours of spring. 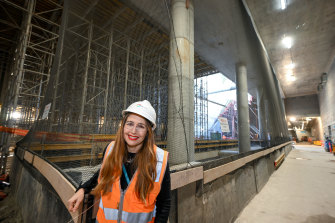 Patricia Piccinini wants her artwork at the new Parkville station to provide commuters with a reprieve, a glimpse of nature. Credit:Eddie Jim

Surrounded by hospitals, the University of Melbourne, and research centres, the Parkville precinct is “a heightened space”, says the acclaimed artist, who’s best-known for her otherworldly part-human, part-animal characters, including Skywhale. She thought long and hard about who would use the area – people receiving treatment for cancer and their families, as well as hard-working researchers and uni students – and decided to make a piece that would provide a moment of respite. “How can I nurture people through this experience?”

“I hope this work will make people feel kind of fortified. Even though you’re moving, even though you’re on your way, you can relax and meditate on this colourful work and the vibrations that come off it,” she says of the piece to be made of hundreds of tiles, which will sit on the concourse below Grattan Street. “It’s a work about nature – the colours are spring colours, these beautiful verdant greens, the new shoots of leaves, the ripening colours of fruit on a tree.”

Unlike much of her art, which is provocative and designed to get people to think about ethical dilemmas, she says this is an invitation to recharge. “In our contemporary lives, our minds are so switched on and looking for stimulus, it’s actually really hard to go, ‘I’m just going to look at this and to see it and just be with it’. The work has to invite people to do that. That’s my dream response.”

“It’s our cultural fabric, [people might say] I’ll meet you under the colour-field and have memories of meeting their friends there – those colours are part of their life’s history.”

Raafat Ishak, head of painting at the Victorian College of the Arts, will create a work for Anzac Station on St Kilda Rd, which will provide access to the Shrine and the Domain. His artwork will address the history of Melbourne’s grand boulevard, including the residents who have lived there over the years. Born in Egypt, Ishak came to Australia when he was 15; his work focuses on the history of painting and architecture. 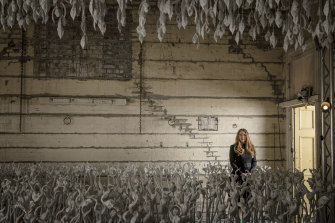 Piccinini at her show A Miracle Constantly Repeated at Flinders Street earlier this year.Credit:Eugene Hyland

Danie Mellor will devise a piece for the new State Library station; his work explores where the present meets the past, the landscape and relationships between First Nations and non-Indigenous cultures. 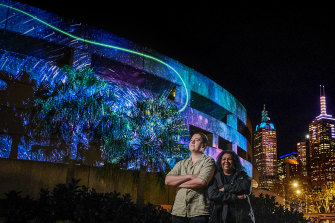 Maree Clarke’s Spirit Eel in Ancestral Memory on Hamer Hall, made with Mitch Mahoney. Clarke is making an artwork that will appear across all five new rail stations in Melbourne.Credit:Eugene Hyland

In North Melbourne, Arden Station will feature a work by Sydney-based Abdul Abdullah, whose multi-disciplinary work focuses on ideas around othering.

Finally, under the City Square, Town Hall Station will host a piece by Rafael Lozano-Hemmer, a Mexican-Canadian artist, whose work is known for fusing architecture, technology and public participation.

They join Yorta Yorta/Wamba Wamba/Mutti Mutti/Boonwurrung artist Maree Clarke, who was announced in 2020 as the artist commissioned for a work spanning all five new underground stations, which will open in 2025.

Some of the artists were invited to create works, while others came to the project via expressions of interest, assessed by an advisory panel made up of Professor Donald Bates, one of the lead architects of Federation Square; Max Delany, artistic director and CEO at the Australian Centre for Contemporary Art; arts leader and curator Professor Natalie King; and Kimberley Moulton, a senior Victorian First Nations curator. The cost of the commissions has not been revealed.

Public art has been an ongoing part of the Metro Tunnel works, including one in the Parkville precinct last year that paid homage to our health professionals, featuring real people including nurses, doctors, cleaners and researchers.

I Was A Real C U Next Tuesday, Perez Hilton Admits! AND…
Recent Posts