Home » Lifestyle » Meet the trekkers who helped raise over £50,000 for The Hygiene Bank Meet the trekkers who helped raise over £50,000 for The Hygiene Bank

The sun was shining, spirits were high and social distancing firmly in place last Saturday as nearly 60 Metro.co.uk Lifeline trekkers set off to take on 10 of London’s hidden ‘peaks’.

Covering 26-miles of beautiful woodland, fields and even the odd golf course – along with a few busy roads along the way – it took most between nine and 10 hours to complete the walk, which was in aid of The Hygiene Bank.

Due to the new ‘rule of six’ trekkers were separated into small teams, depending on experience and speed, before they embarked on the London 10 Peaks challenge.

Among them were Metro.co.uk readers, charity volunteers and celebs Charlie Webster (who was one of the first to finish after completing the walk in just eight hours!), Vicky Pattison and ambassador for The Hygiene Bank, Meg Mathews.

While there were blisters galore by the time most reached the finish line, it didn’t dampen any smiles as each person picked up their well-deserved medal from trek organisers Charity Challenge.

Speaking after the event, which coincided with National Hygiene Week, Holly Crook said she decided to sign up after a severe netball accident last year that required knee reconstruction.

‘I thought it would be a great way of both raising money for a very worthwhile charity, as well as personally challenging myself a year on from not being able to walk unaided,’ she explained. 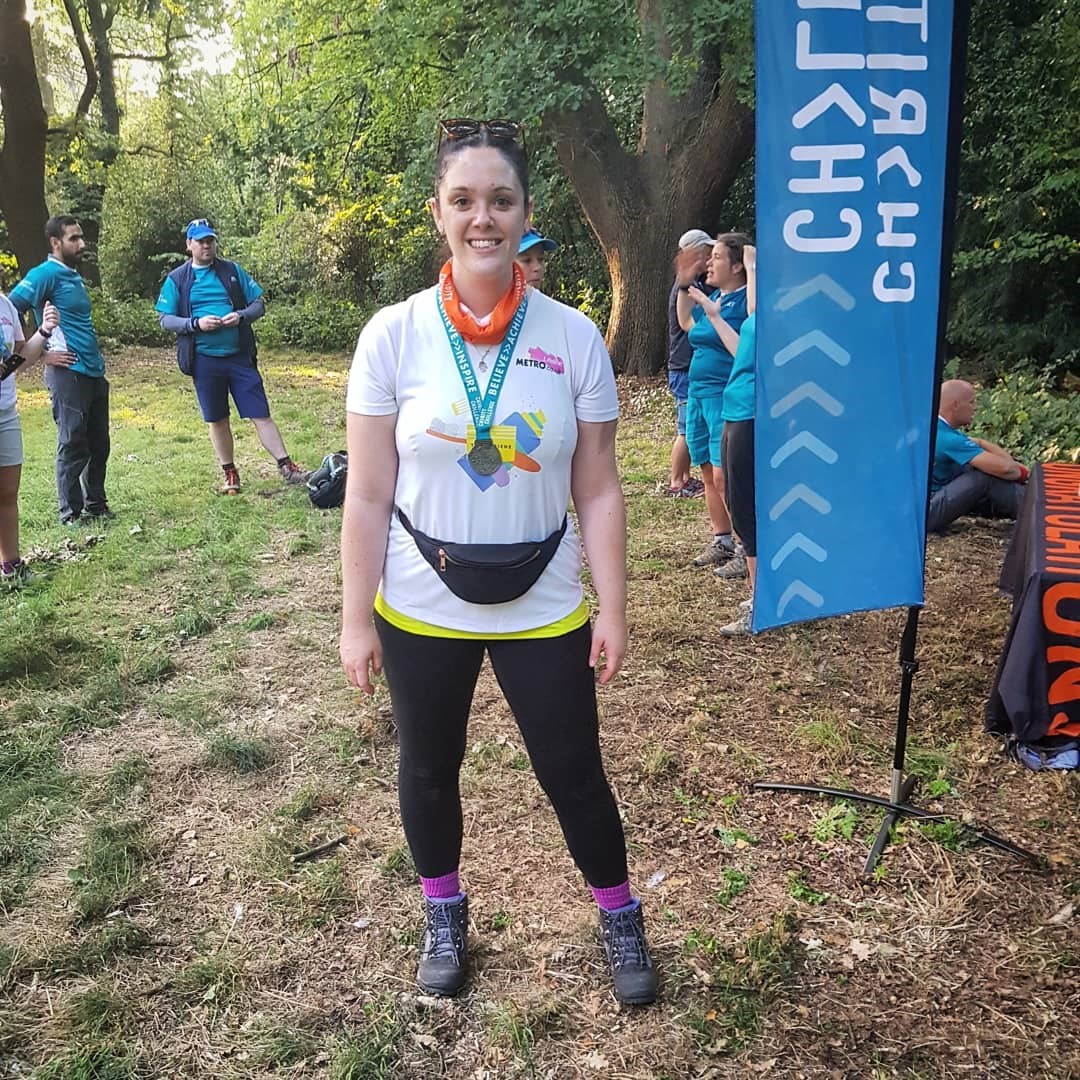 ‘The last 10km were definitely the hardest, and reaching the top of the 10th peak was such a great feeling.

‘When I finished it was fairly emotional thinking about how far I had come from being on crutches just 10 months previous. But knowing as a group how much we’re raising for The Hygiene Bank makes any pain I was in so worth it.’

Being part of the trek was an honour, according to Tasha Thompson – although she admits that she was apprehensive beforehand.

‘But there was no need,’ she said. ‘Everyone was absolutely lovely and I was in a really great group.

‘I expected there to be many lows, to feel fed up and to want to know “are we there yet?”. But I didn’t have any dips in enthusiasm as the banter of our group, along with the snacks we shared and the breathtakingly beautiful scenery, got me through it.’

Fellow trekker Alex Scott-Ruddock added that despite suffering blisters, cramps and having to get up at 3.45am to get to the start point for 6.30am, he’d do it all over again in a heartbeat.

‘I am very proud to have taken part in the event, to have completed it and helped raise so much money is brilliant,’ he says.

‘My body is still tired and sore, as I have a dodgy back and started to struggle around the 20-mile mark from blisters and leg cramps.

‘When I finally finished I felt such relief and despite being the last person over the line, I was still 90 minutes ahead of when the final group was expected in, so that gave some joy too!’

It was a Facebook post that made Suzie Vale sign up earlier this year, after she saw old primary school friend, Jessica Moore, who volunteers for the charity, write about it on her page.

‘I hadn’t seen Jess for 30 years, but went for it anyway,’ she says. ‘After the walk, she’s no longer just a FB friend, but one in real life too!’

And despite not knowing any of her trek group thanks to the ‘rule of six’, Suzie says conversation never stopped.

‘They were fantastic,’ she says. ‘Such a diverse range, from a student who instigated The Hygiene Bank in her area to a jewellery expert and warehouse staff for British Heart Foundation. Everyone was there for very different reasons and we all helped each other along.’

Although the deadline for donations is still over two weeks away, so far our amazing trekkers have raised a jaw-dropping £50,800 for the charity.

‘What a way to finish the nation’s first ever National Hygiene Week with a marathon trek across north London with 54 other amazing people, all raising vital funds for families and school children across the UK,’ says Tom Poynter, Chair of The Hygiene Bank.

‘With our socially distanced teams of six, it was wonderful to enjoy a beautiful day’s walking whilst discussing the impact of hygiene poverty and how we can all make a positive difference to people less fortunate.

‘The day was brilliantly organised by Tom and the crew at Charity Challenge and I personally thank the Metro.co.uk Lifeline team for working with The Hygiene Bank to bring the event together so successfully.

‘Although National Hygiene Week and the trek is now finished for 2020, our work continues,’ Tom adds.

‘We expect that there will be even more people falling into poverty as a result of the pandemic so please continue to support us by donating funds to The Hygiene Bank, or by donating hygiene products.’

For more information on The Hygiene Bank click here.

Filthy Rich cast: Who stars in the Fox TV show?