A new member of the family. Kaley Cuoco announced that she has welcomed a tiny addition — a rooster!

“Welcome to your new life Mini Coop!” the Flight Attendant star, 35, wrote alongside a video of herself with the bird via her Instagram Story on Friday, October 22.

Cuoco explained that she picked up Mini Coop from Lancaster Animal Care Center in Los Angeles. “We rescued a baby mini rooster and I’m completely in [heart emoji],” the avid animal lover wrote. “Thank you @lancasteranimalslaco @pawsforlifek9 & @rita_earl_blackwell for taking such good care of him!” 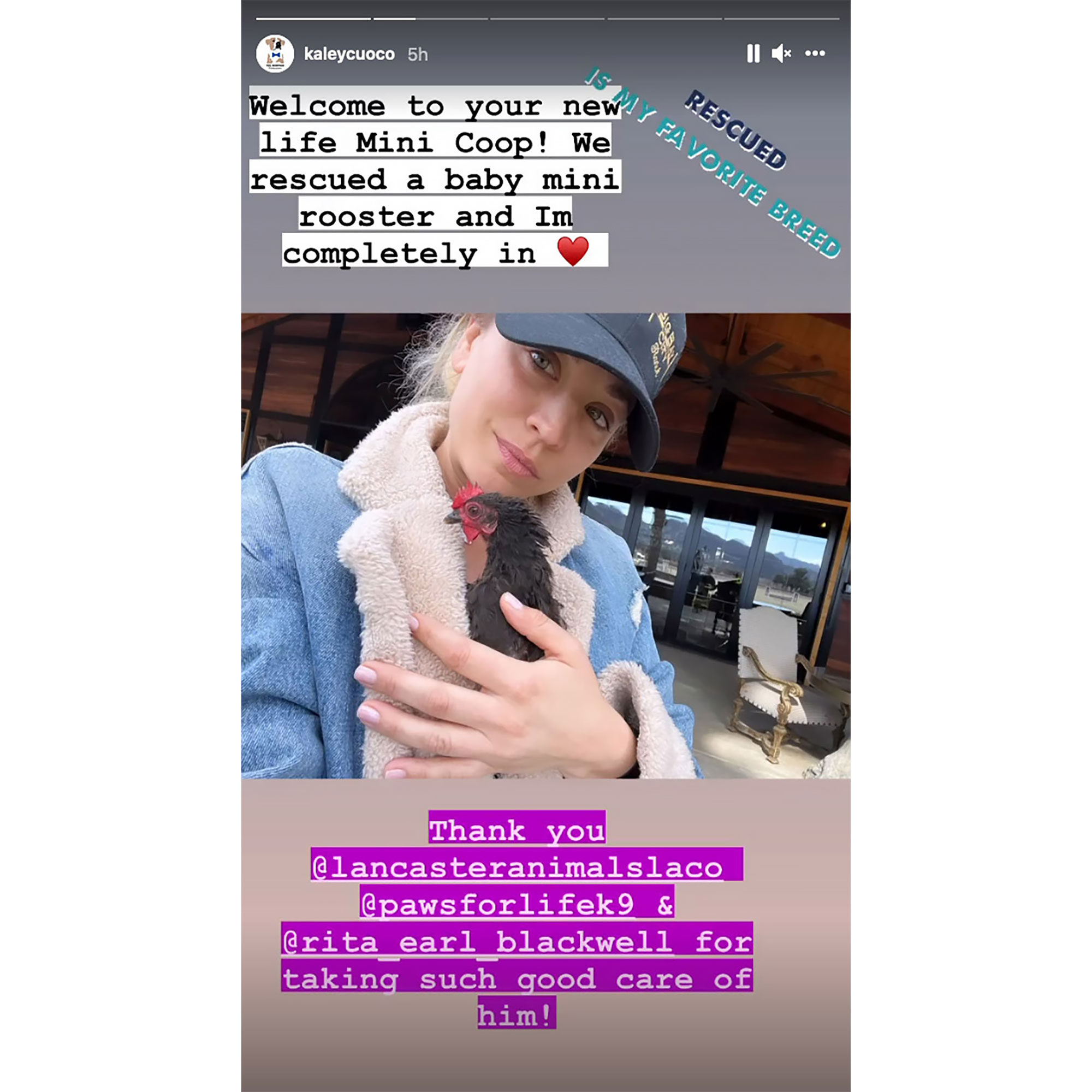 This marks Cuoco’s first adoption since announcing her split from Karl Cook in September. She filed divorce paperwork the same day that they confirmed their breakup.

“Despite a deep love and respect for one another, we have realized that our current paths have taken us in opposite directions,” the Big Bang Theory alum and businessman, 30, said in a joint statement to Us Weekly at the time. “We have both shared so much of our journey publicly so while we would prefer to keep this aspect of our personal life private, we wanted to be forthcoming in our truth together. There is no anger or animosity, quite the contrary.”

Kaley Cuoco and Karl Cook: A Timeline of Their Relationship

Since the split, Cuoco has continued to focus on her passions — acting and animals. The actress filmed a romantic comedy opposite Pete Davidson before returning to her Emmy-nominated role in HBO Max’s The Flight Attendant, which is currently filming season 2.

She’s also adopting more animals. Mini Coop joins Larry, a senior dog Cuoco adopted in July, as well as pups Dumpy and Luz. The 8 Simple Rules alum is also mom to many horses, pigs and even a goat. Mini Coop will have plenty of company in Cuoco’s barn.

Blackwell, a shelter volunteer, gave the California native a shout-out for taking in her latest rescue. “Thank you @kaleycuoco for adopting the teeniest, tiniest little rooster there ever was 🐣 #seenequalssaved,” she captioned a video taken before the adoption.

“Mini Cooper was adored at the Lancaster Animal Care Center @lancasteranimalslaco and would often spend time in the offices with staff while they worked!” Blackwell added. The video showed the staff putting Mini Coop on their desks and holding him in their hands. The baby bird is so small that he was easy to pick up with one hand.

Blackwell, who also helped Cuoco adopt Larry earlier this year, added that the shelter made sure Mini Coop had his favorite toy with him as he headed off to live among the stars.

Celebrities With Their Pets

“Everyone came out to say goodbye and send him on his way – they even packed up his favorite toy to go home with 😆,” the volunteer shared. “Happy new life, cherished and adored, with a family of littles.”

'Dancing with the Stars': Kenya Moore is Next to Go