Man, 33, whose depression led him to think about taking his own life nine times in a month reveals how a year-long 3,000 mile trek across Britain (and meeting Prince Harry) helped him overcome his mental health battles

A man who undertook a year-long 3000-mile walk around Britain has claimed it saved him from suicidal thoughts.

Jake Tyler, 33, was a barman in his mid-thirties when depression took over in 2016, driving him to experience increasingly dark thoughts which led him to consider taking his own life.

At one point he was about to jump from a window when he called his mother, and ended up moving back home to Maldon, Essex. He recovered by taking walks everyday with his dog and made the realisation that benefitted his mental health.

Jake has now penned a memoir, A Walk on the Edge, in which he discusses how planning and executing a 3,000 miles-trip around the UK mainland in 2017 helped him reconnect with himself and feel ‘alive’ again.

That same year, while working on a BBC documentary called Mind Over Marathon, he met Prince Harry and branded him one of his ‘new heroes’ after the pair candidly discussed what life can be like for men suffering with poor mental health. 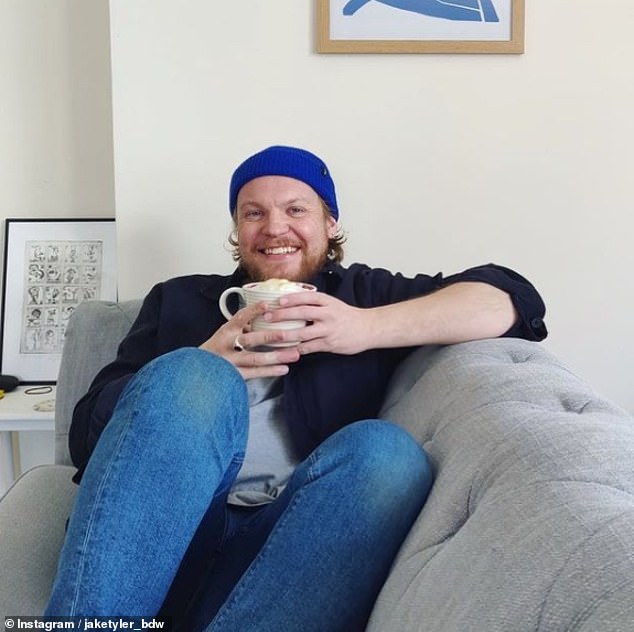 Jake Tyler, 33, pictured, from Essex, discusses in his memoir A Walk on the Edge how he trekked 3,000 across Britain after going through a depressive episode in 2016 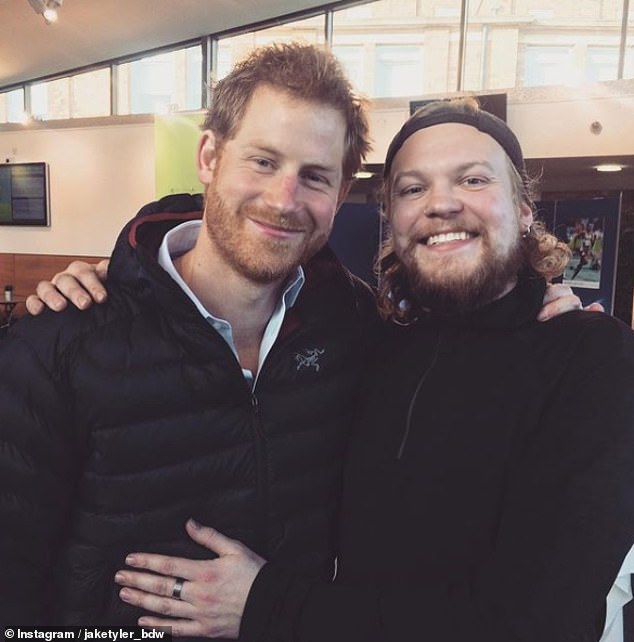 Jake, who suffered from anxiety and depression from the age of 15, explained he considered taking his own life nine times in one month when his mental health hit its lowest point in 2016.

He discussed the different scenarios he could fathom happening in candid fashion, and also imagined ways he could die without actually committing self-harm.

‘I longed to eat something I didn’t know I was allergic to, to be stabbed in the street, to have an undiagnosed heart condition,’ he wrote.

However, one scenario was more prominent than others. 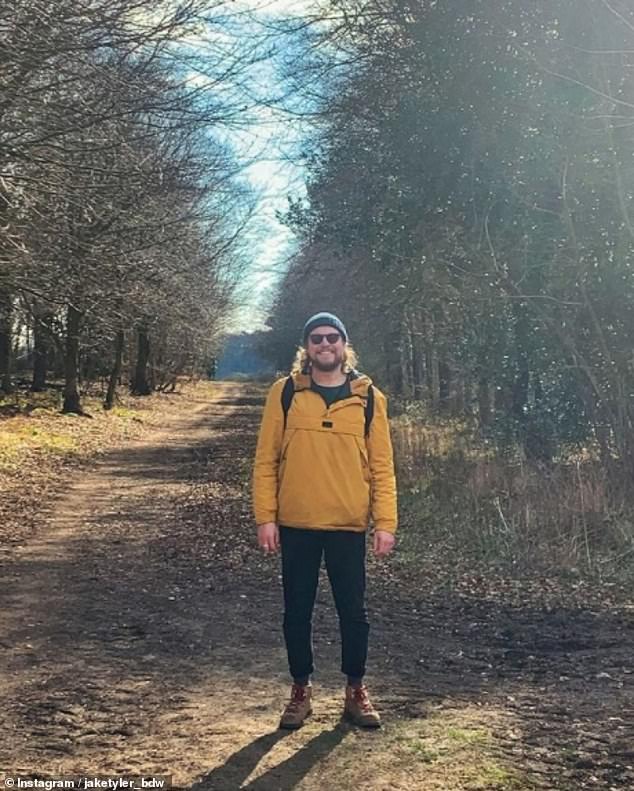 Jake, pictured now, said he thought about taking his own repeatedly in 2016, before he almost went through with it

‘But of all the versions of death I could dream up, the one I fantasised about the most was jumping from the room on the fourth storey, above the bar,’ he wrote.

‘I was in poor shape, in every conceivable way. And I had never felt so alone.’

In the book, he recounted how he used to bottle his negative emotions and felt he ‘had to avoid being found out at all costs.’

‘Whenever I felt this way, whenever my mind told me how s*** I was, I buried it,’ he added.

Adopting the old saying of ‘stiff upper lip’, Jake admitted in the book he never considered his low mood to be a ‘mental health issue,’ and it didn’t enter his head to see a therapist. 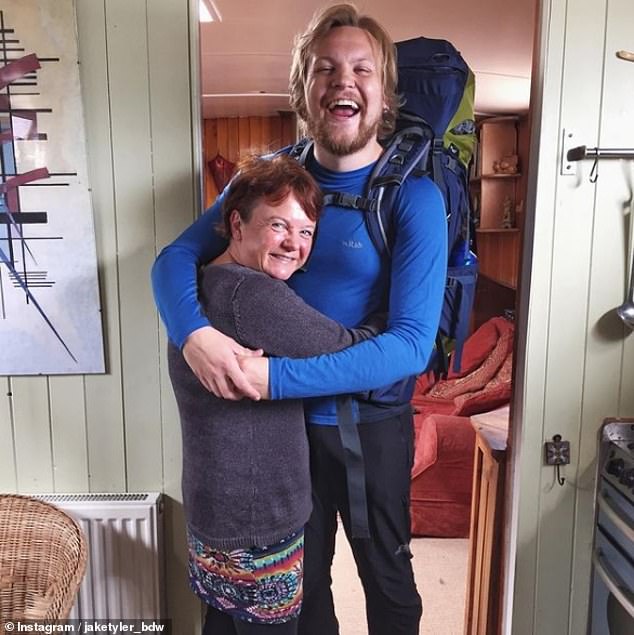 The mental health activist pictured with his mother the day before he started his walk. Jake said walking his dog in his home town made him realise how fresh air influences his mental state for the better

‘Doctors were for physical ailments – cold, flu, tummy bugs – not for helping with the feeling that there is a c*** version of yourself that makes you sad and scared and which constantly threatens the person you want to be,’ he wrote.

One terrifying evening, Jake came the closest to taking his own life, after getting overwhelmed with ‘sadness engulfing [him] like bonfire smoke’.

‘The pain I felt was so deep I convinced myself it would be impossible to recover from it. I would never be happy again. In that moment, there was only one way I could see to end the pain,’ he recounted.

He wrote about the state he was in at the time, saying: ‘What you are feeling is disjointed and jarring and nothing makes sense. 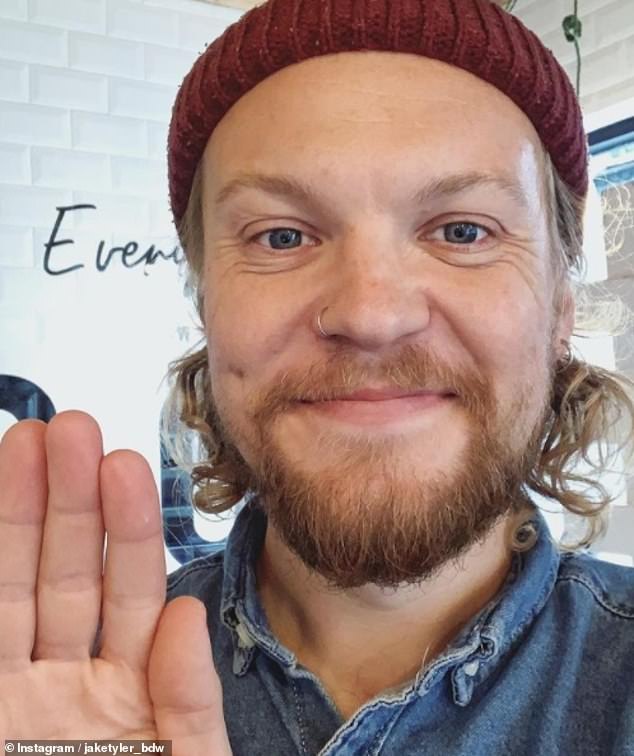 Jake, pictured now, moved to Cambodia after penning his story and said he still had episodes of low mental health but had better tools to deal with them in a healthy way

‘You feel that one one else could possibly understand and so you put it off, assuming that if you can’t be understood, you can’t be helped,’ he added.

However, instead of actioning his plan, Jake was moved to call his mother, which he said taught him that ‘opening a door and sharing your mind with another person isn’t about seeking answers, it’s about no longer being alone in your pain’.

On the phone, he admitted to his mother he had been thinking about taking his own life.

‘Saying it had made me think about how close I’d comer to dying that morning and the realisation made my skin itch,’ he wrote.

‘Tuesday 29 March 2016. It could have been a day that everyone who loved me might never recover from, forever tormenting themselves by wondering if they could have done more, why they hadn’t noticed something was wrong. I felt sick with shame,’ he added. 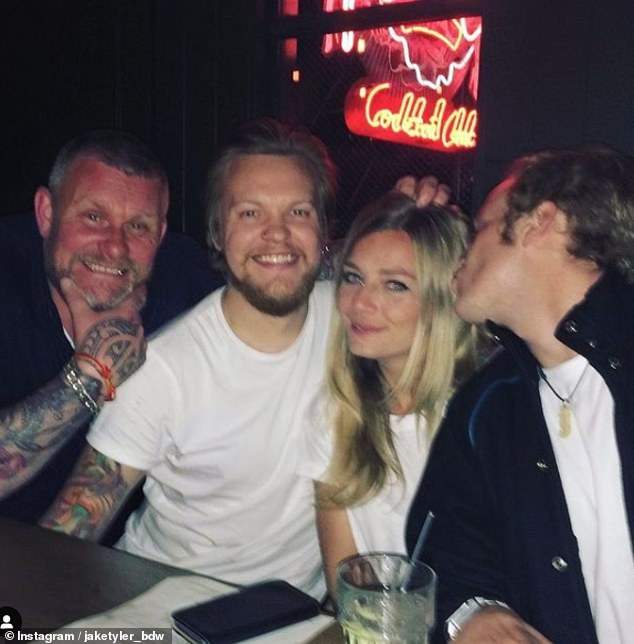 Jake explained this picture was taken at ‘the darkest time of his life,’ when he was contemplating suicide

With this phone call began Jake’s road to recovery from years of depression. A journey he first undertook by moving back home.

Once there Jake started to take daily walks with the family dog. His mother still lived in the town he grew up in, which brought up childhood memories.

Day by day his mental health improved, and Jake wrote in A Walk on The Edge that he started to notice a change in his posture, and that his confidence was returning.

‘On our morning strolls along the river I often found myself in a state of quiet appreciation of the stillness of it and the beautiful simplicity of nature,’ he wrote. 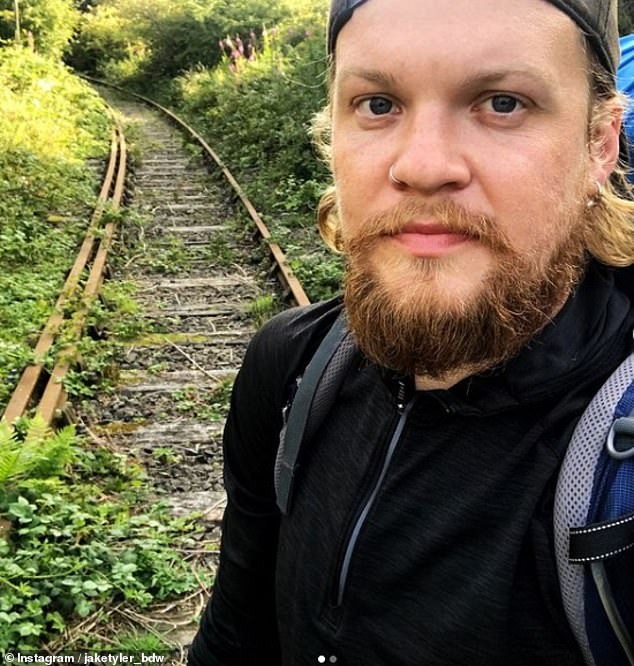 ‘Being outside wasn’t just about fresh air and earthy smells, it had given me the mental space I needed to let go of poisonous thoughts, to recognise that, as insufferably painful as my life had become, I had never actually wanted to die, I had just needed to remember what it was like to feel alive.’

Going from strength to strength, Jake started to plan a much more ambitious walk that would take him around the country, which he refers to as a ‘Lap of Britain’ in his memoirs.

But the magnitude of the task wasn’t lost on him, and he doubted people would take him and his undertaking seriously.

‘This was nuts. No one was going to take me seriously when I told them I was going to attempt this,’ he recounted.

‘But, for some reason, that only made the prospect of doing it more appealing. Imagine if I pulled this off – an overweight, clinically depressed barman with flat feet and a coke habit?’

But he persevered, and told his mother of his plan, saying: ‘I didn’t know how I was going to get better after what happened to me in London.

‘I really didn’t think I was ever going to get better… I couldn’t see a way out. But taking Reg for walks, it’s the missing link connecting me back to a bit of me I didn’t even know had gone missing. 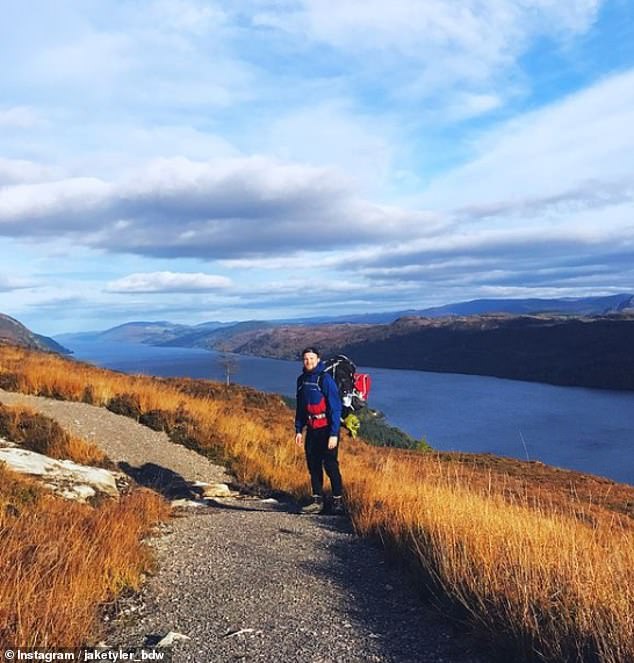 Jake photographed during the Scotland leg of his journey in 2017. The mental health activist said he realised he had never wanted to die, but needed to feel what it was like to be alive again 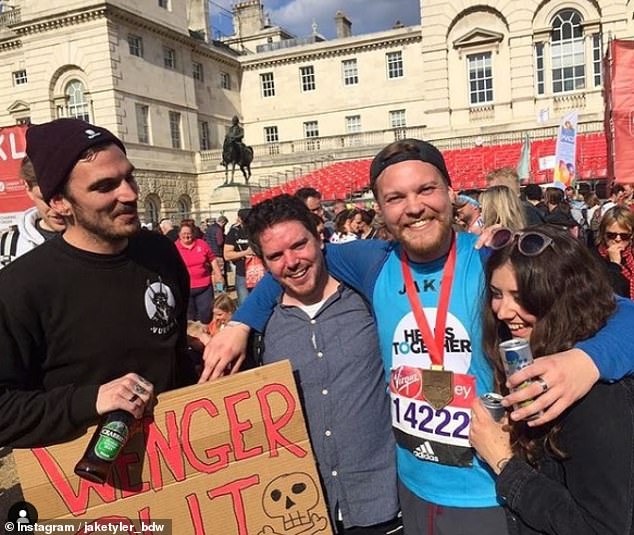 Jake in 2017 after competing in a marathon after spending a year walking 3,000 around the UK

‘I haven’t had anything else, I haven’t taken one antidepressant, haven’t gone to any more therapy sessions. The space and fresh air and walking have made me feel like this. I don’t know where its come from. But something’s telling me this is something I have to do.’

His mother was supportive of his plan, and this motivated Jake to open up about his mental health struggles with his other loved ones.

Before his journey, he wrote a note, admitting he had thought of killing himself, which he shared with family members and friends.

‘My friends and family were going to know that I had wanted to die. I wondered whether there would be judgment, people asking how someone who had a pretty nice life on paper could be so unhappy, questioning what was wrong with me and why I couldn’t just be happy,’ he wrote.

‘We all like to pretend that we do what we want and we don’t care much for the opinions of others, but we do. We all want to be accepted. We all wanted to be considered “normal” (whatever the hell that means).’

Jake said in his memoir that he was taken back by an outpouring of support from the people closest to him.

‘It was overwhelming. I’d felt so separate for so long, and now, through finally being honest with myself and daring to voice my feelings, I felt more connected than ever to the people in my life, past and present,’ he said.

In an author’s note at the end of the book, Jake revealed he moved to Cambodia to start a new life with his new partner. He admitted he still suffered from low mental health episodes, but had more tools to deal with them.

‘Depression continues to distort my reality and bend my truth in an attempt to draw me away from everything and everyone I love,’ he wrote.

‘It’s still strong enough to pull me into the same black hole, where it hugs me and comfort me and tells me that that is where I belong. But where I was once powerless against it, I feel I now have some of the tools I need to manage it a little better, to put a lead on it and led it bark at me, rather than allow it to maul me.’

A Walk on the Edge, by Jake Tyler, is published by Michael Joseph

For confidential support, log on to samaritans.org or call the Samaritans on 116123