‘TikTok told me I had CANCER’: Man, 22, praises eagle-eyed social media users who pointed out his ‘swollen thyroid’ – revealing lump they spotted was actually a ‘cancerous nodule’

A 22-year-old man has spoken out to praise eagle-eyed TikTok users who spotted a swollen lump on his thyroid that turned out to be a cancerous nodule.

Aaroh Mankad, 22, from Seattle, who goes by SeattleTechBro on the app, revealed in a recent video that he underwent surgery to remove the cancerous part of his thyroid – which was only diagnosed by doctors after several TikTokers urged him to get it ‘checked out’.

‘TikTok told me I might have cancer. And it seems like they were right,’ Mankad explained in a post about his recent surgery, revealing that he only visited his doctor out of ‘an abundance of caution’ after being sent warnings from viewers who pointed out that his thyroid looked ‘swollen’ and ‘enlarged’.

According to Mankad, he was first alerted to the suspected illness after posting a video about his budget – which prompted several users to call attention to a swollen lump in the center of his throat.

‘My first couple of TikTok videos were just me talking about my budget, and people commented or DM’d me saying that my thyroid looked a little enlarged and that I should get it checked out and that it could potentially be cancerous,’ he said.

so yeah that was a wild experience ##cancer ##tiktok 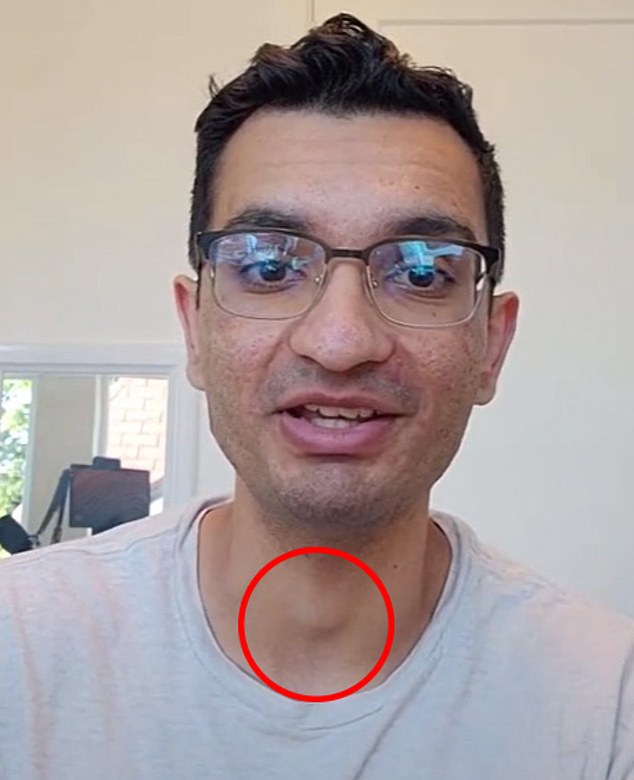 Eagle-eyed: A 22-year-old TikTok user has revealed how he learned he had a cancerous nodule on his thyroid after his followers warned that the gland looked ‘enlarged’ in one of his videos 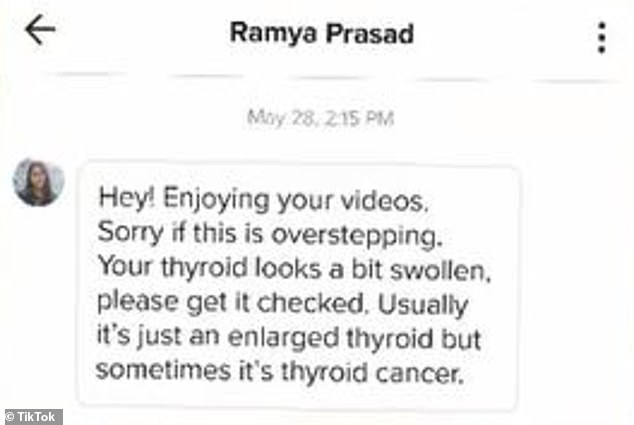 Warnings: Aaroh Mankad, from Seattle, explained in a now-viral video that he chose to have his thyroid checked out by doctors after receiving several warnings from viewers

Mankad then shared several screenshots of the messages he received, with one users writing in a direct message: ‘Hey! Enjoying your videos. Sorry if this is overstepping.

Another echoed the sentiment in the comment section, warning: ‘Your thyroid looks a bit swollen. You might want to get that checked.’

Mankad said that he made the decision to visit his doctor ‘out of an abundance’ of caution after receiving the warnings – admitting that he wouldn’t have ever known there was something wrong had he not seen them.

‘And so out of an abundance of caution and just because I get anxious about these sorts of things, I went ahead and got it checked out,’ he continued.

‘And long story short, after several rounds of tests and ultrasounds and such we found out that there’s a 95 per cent chance that that nodule I had was cancerous.’

The thyroid is a butterfly-shaped gland at the base of the neck below the Adam’s apple. It releases hormones that regulate heart rate, blood pressure, body temperature, and metabolism.

Signs to get your thyroid checked out: Symptoms of thyroid cancer

Thyroid cancer usually does not present signs early on in the disease, and is typically only found through ultrasounds, CT scans, and MRIs.

There are several types of growths that can appear on the thyroid gland. One of them being nodules, like Mankad’s.

These nodules are typically non-cancerous, with only two out of 20 being cancerous.

Mankad was given two treatment options by his doctors: he could either ‘take out his entire thyroid’ or have ‘just the cancerous bit’ removed.

‘I chose to just take out the cancerous bit in the middle,’ he said – white pointing at a Band-Aid that was covering his surgery wound and explaining that he made the decision to opt for the lesser of the two procedures because the other option would have seen him forced to ‘take synthetic thyroid hormones for the rest of his life’.

He admitted he was going to slow down on content making while he heals from the surgery.

‘It kind of drains me to talk so much,’ he told his fans.

Mankad had been posting a series on how he spent his $330,000 a year tech budget, as well as, job and tech tips.

‘I appreciate the patience and I hope to see you all soon enough,’ he concluded.

Mankad’s video was flooded with comments from well-wishers – including one from a user who had raised the alarm about his swollen thyroid in the first place.

‘I was nervous about reaching out but I’m really glad that I did!’ she wrote, adding: ‘Wishing you a speedy recovery.’

Another person chimed in: ‘OMG I am so glad people reached out! I hope you have a speedy recovery.’

At the end of the world there is love: winners of 2021 CBCA awards announced
Recent Posts