Lululemon Founder Chip Wilson Pledges $100 Million To Save The Wilderness

Lululemon is a yoga and athleisure company founded in Vancouver, Canada in 1998. The Lululemon pronunciation is “loo-loo-lemon”. They offer technical athletic apparel for yoga, running, dancing, training, and other sweaty pursuits, as well as lounge and streetwear. Fans of Lululemon rave over the perfect design and quality of their clothing that truly performs on the mat and on the go.

The brand is most well-known for their iconic Align yoga line, which includes leggings, pants, joggers, and sports bras. They originally specialized in women’s yoga wear, but have recently expanded into menswear, swim, jackets, accessories, and even a home workout system called MIRROR.

As of January 2022, there are over 500 Lululemon stores around the world, many of which include a yoga studio, fitness concierge and/or communal spaces. We’ll talk more about where the best stores are and how to find Lululemon discounts and outlets below.

Lululemon’s mission to “elevate the world from mediocrity to greatness” is reflected in their products, people, and store experience. Founder Chip Wilson was unimpressed by basic athletic brands and wanted to create the most superb quality and performance apparel that the yoga industry had ever seen. Today, Lulu takes its mission far beyond apparel into the realms of community engagement, social impact, environmental responsibility, and personal empowerment in the workplace.

Lululemon Athletica Inc. founder Chip Wilson is making his biggest philanthropic gift ever—and one of the largest among Canada’s ultra-rich—to protect vast tracts of wilderness in the western part of the country.

Chip Wilson and his wife, Summer, have pledged $100 million ($75.8 million) through their foundation to acquire wilderness space in British Columbia. The province is home to 5.3 million people and holds temperate rainforests, rocky coastlines, snow capped mountains and even desert lands in an area larger than Germany and France combined.

The money will be used by the B.C. Parks Foundation to buy forests and repurchase mining, forestry and other resource licenses, turning “massive amounts of land” into parks that indigenous groups would manage and use for revenue-making purposes such as tourism, Wilson said in an interview.

“Our vision for our family is providing components for people to live a longer, healthier, and more fun life. So it all kind of fits,” said Wilson, 67, whose $5.8 billion fortune is derived primarily from his 9% stake in the athletic clothing company he started in Vancouver.

The couple, who live in Vancouver, are hoping to encourage matching donations from governments, businesses and other philanthropists to advance the B.C. Parks Foundation’s goal of protecting 25% of the province’s land and water. But they’re setting a few conditions on spending the funds, which could happen “quite quickly,” said Chip Wilson, Canada’s 13th-wealthiest person according to the Bloomberg Billionaires Index.

Preserving land in this way is a good investment for philanthropists because it doesn’t require much effort, he said on Bloomberg Television. “For people whose time is precious and they want something that lasts forever, I can’t think of a better place to put their money.”

The province has long been a battleground between environmentalists and resource developers. At times, protests and violence have broken out over forestry projects and energy pipelines, including two that are under construction, the Trans Mountain oil pipeline expansion and the Coastal GasLink line that will supply a liquefied natural gas plant on the coast.

Resource development doesn’t have to live in contradiction with wilderness preservation, Wilson said. Canadian energy such as LNG could bring in billions of dollars that could be used to protect wildlife and nature. “That would totally offset any kind of blemish” from the pipelines, he said.

The B.C. Parks Foundation has already earmarked some of the money to protect three areas, including the 528-acre Falling Creek Sanctuary in northeast B.C., Teit’s Sanctuary at the confluence of the Thompson and Nicola rivers and Bourguiba Springs in the South Okanagan region. The group is also looking at other areas in the northern part of the province for protection.

“We’ve been lucky enough to travel the world and see how the impact of industrial approach has affected places that had previously been pristine,” Summer Wilson said. “I want to make sure that we preserve this province to the same level of beauty that awed me when I first came here.”

Chip Wilson founded Lululemon more than two decades ago but fell out with the company and clashed with then-chief executive Christine Day. He stepped down as chairman after he drew scorn for saying some women’s bodies “don’t work” for Lululemon’s stretchy pants in a 2013 interview with Bloomberg News. He sold down his stake and left the board in 2015. 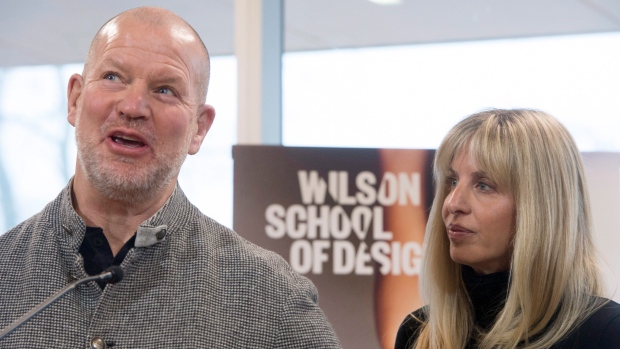 He later published a book in which he criticized Lululemon’s performance and was stripped of his right to a board seat. He also holds a large stake in Amer Sports Group, owner of brands such as Wilson sporting goods, Atomic ski gear and outdoor apparel brand Arc’teryx.

The Wilsons have also given millions to build schools in Ethiopia and to seek a cure for muscular dystrophy, a disease that afflicts Chip Wilson.