When climate activist Anjali Sharma gets home from school, she rarely has time to have a snack before she is making calls and writing statements. “I wish I could be a normal teenager and just be able to focus on homework and nothing else.”

The teenager first became involved in the climate movement in 2019 after an Instagram ad found its way onto her news feed. While she had always been concerned about the environment, having seen the impacts of climate change play out in her home country of India, it was the School Strike 4 Climate movement that inspired her to become more active. 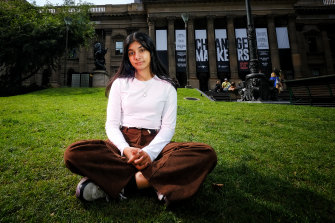 Sharma is part of a generation of young activists driven by the urgency of warnings that the global tipping point is approaching and that governments are failing to respond. The activists are turning to traditional forms of direct action and using more creative methods to convey their message. The 17-year-old has planned and organised protests, spoken to thousands of people and led a federal court case against environment minister Sussan Ley.

But just as the climate movement reached its peak in 2019, the global pandemic stopped it in its tracks. Organisers were forced to turn to online actions – about 2000 people logged onto Zoom for last October’s Sydney protest, which was a far cry from the 80,000-strong group that gathered in Sydney’s CBD a few years earlier.

Sharma says numbers are declining not because people care less about the environment. It’s part of a broader shift in how people mobilise. Although she admits that some people have become increasingly disengaged and disillusioned with the government’s lack of action. The challenge for those still in the movement is how to reignite it.

“There are heaps of avenues people are using to push the government: that includes court cases, volunteering for other NGOs, being involved in election campaigns,” she says. “People have diverted their focus from student strikes, but not from climate change.”

The past few years have taken a toll on Sharma. When the federal court found that Ley did not have a duty of care to protect young people from climate change harm when considering fossil fuel projects such as mines, Sharma was forced to step away.

“It was blow after blow. I was dealing with school stuff and climate anxiety. The legal team looked at me and says, ‘we are cutting you off’. They didn’t reply to me for a week. I was angry, I wanted to say, ‘let me do this work’. But they … knew this would lead to burnout,” she says. “You can’t do activism for years and burn yourself out and not come back. That’s not sustainable for you and not sustainable for [the] movement.”

She also revealed on social media this week that she had received racist messages over the past two years.

University of Queensland research fellow Dr Robyn Gulliver says the ebb and flow of the environmental movement is not new. Throughout history, she says there are peaks – often driven by large events, such as the 2006 peak driven by Al Gore’s film The Inconvenient Truth, or when Swedish student Greta Thunberg, then 15 years old, sparked a global movement after she protested outside the Swedish parliament in 2018.

While Sydney student Kayla Hill has been concerned about the environment for years – her family in Indonesia has experienced homelessness through climate disasters – it was seeing Thunberg’s protest that got the 17-year-old involved. She had found the energy around climate change action in 2019 exciting, but only a handful of people showed up for the first protest she organised after the pandemic. 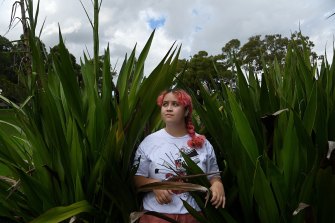 Kayla Hill has been involved in the climate movement since she was 14 years old. Credit:Kate Geraghty

Hill remains optimistic. “The sign of a successful protest isn’t just having millions of people across the world. It is about every little thing you do that helps to contribute to the climate movement,” she says. Hill adds that many climate strikers are now of voting age, and she hopes that will encourage change.

Gulliver says in the lulls between the peaks, the climate movement still ticks along, without the same momentum or media coverage. She expects it won’t be long before another peak emerges.

Farmers, doctors and architects are among a growing diversity of professions now forming climate action groups.

Gulliver notes Australia’s history of direct action to create change – the 1982 Franklin River protest in Tasmania, the 1983 anti-nuclear protests and, more recently, the actions of protestors who disrupt traffic by dangling themselves from bridges and tunnels. Despite threats from NSW authorities that offenders face $22,000 fines and two years’ imprisonment, relatively new groups like Blockade Australia and Fireproof Australia say they will continue their actions.

A Fireproof Australia spokeswoman said many members resorted to direct action after trying more traditional forms of activism for years with little success. “History has told us, the only way to make a difference is to make social and political change is through civil disobedience,” she says. “We are very ordinary people … what we are doing is important to us, and we feel that someone has to be doing this.” Despite the new crackdown on protesters, their determination was just as strong.

Gulliver says that while traditional activism – which includes organising community events or letter-writing campaigns – was instrumental, it might not get the same media coverage as direct action. “Everyone has a different goal, for some people they might value that media attention, or maybe they are using direct action because they want to highlight the urgency [of the issue],” she says.

The climate change movement had swept across western countries at the same time, unlike the civil rights or women’s’ movements, which had been more country-specific. Social media has helped the environment movement transcend international borders.

Deakin University senior research fellow Dr Josh Roose says civil disobedience is part of a healthy democracy, particularly within the climate movement, and plays a role in shaping civic discourse. This was evident in the number of independent candidates running in this year’s election who have prioritised climate change, he says.

As the movement becomes more mainstream, its biggest challenge will be how it maintains this new momentum.

For young people, their drive to see stronger climate action comes from an existential threat that older generations have not felt in the same way. This, Roose says, is why young people need a more substantive role in shaping the world.

More broadly, social media was changing how people interacted and was instrumental in driving extremism, particularly the alt-right movement. This was particularly evident during the pandemic when people spent more time online than ever before. As people feel a growing sense of dissatisfaction with politicians, they were more likely to seek similar views to their own online.

Sharma hopes the upcoming federal election will bring change. “This election is so instrumental because it is the last, meaningful opportunity we have to make our voices on climate change heard. The future of the climate movement rests on this election,” she says.

A guide to the environment, what’s happening to it, what’s being done about it and what it means for the future. Sign up to our fortnightly Clear Air newsletter here.

Most Viewed in Environment