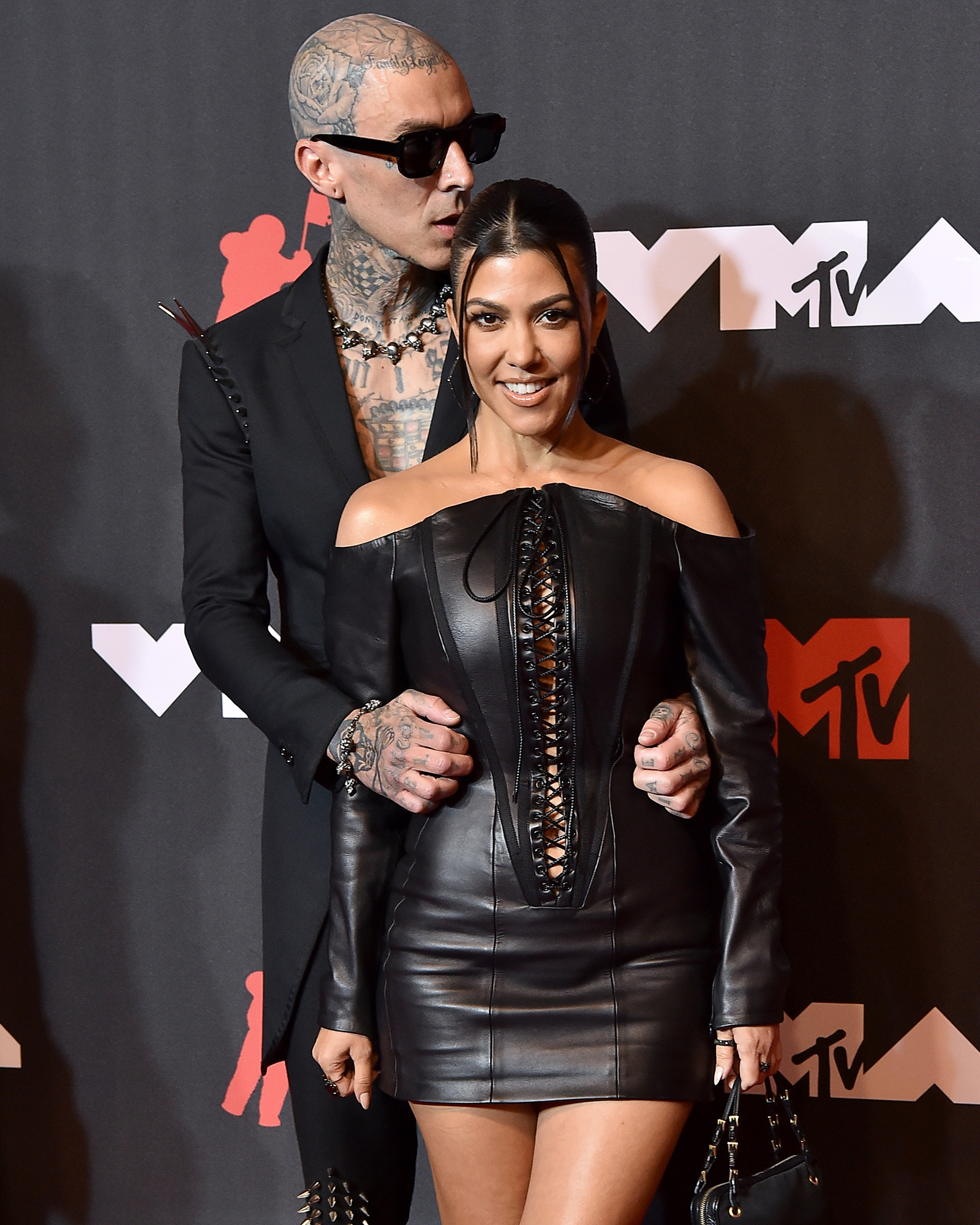 It’s being to look a lot like Christmas! Kourtney Kardashian is in full holiday spirit as she showcased her home’s festive decor, including the giant gingerbread house from mom Kris Jenner.

“Thank you mommy @krisjenner,” the Poosh founder, 42, captioned an Instagram Story clip on Friday, December 3, showing off the well-decorated treat. As she played Bing Crosby’s “It’s Beginning To Look Like Christmas,” Kardashian showed off the marshmallow-piped cookie rendition of their family home.

The house featured a “Merry Christmas” label and name tags for the former Dash owner, fiancé Travis Barker, Mason, Penelope, Reign, Landon, Alabama and Atiana on its roof, alongside enough cookie people to reflect the number of people in their household. 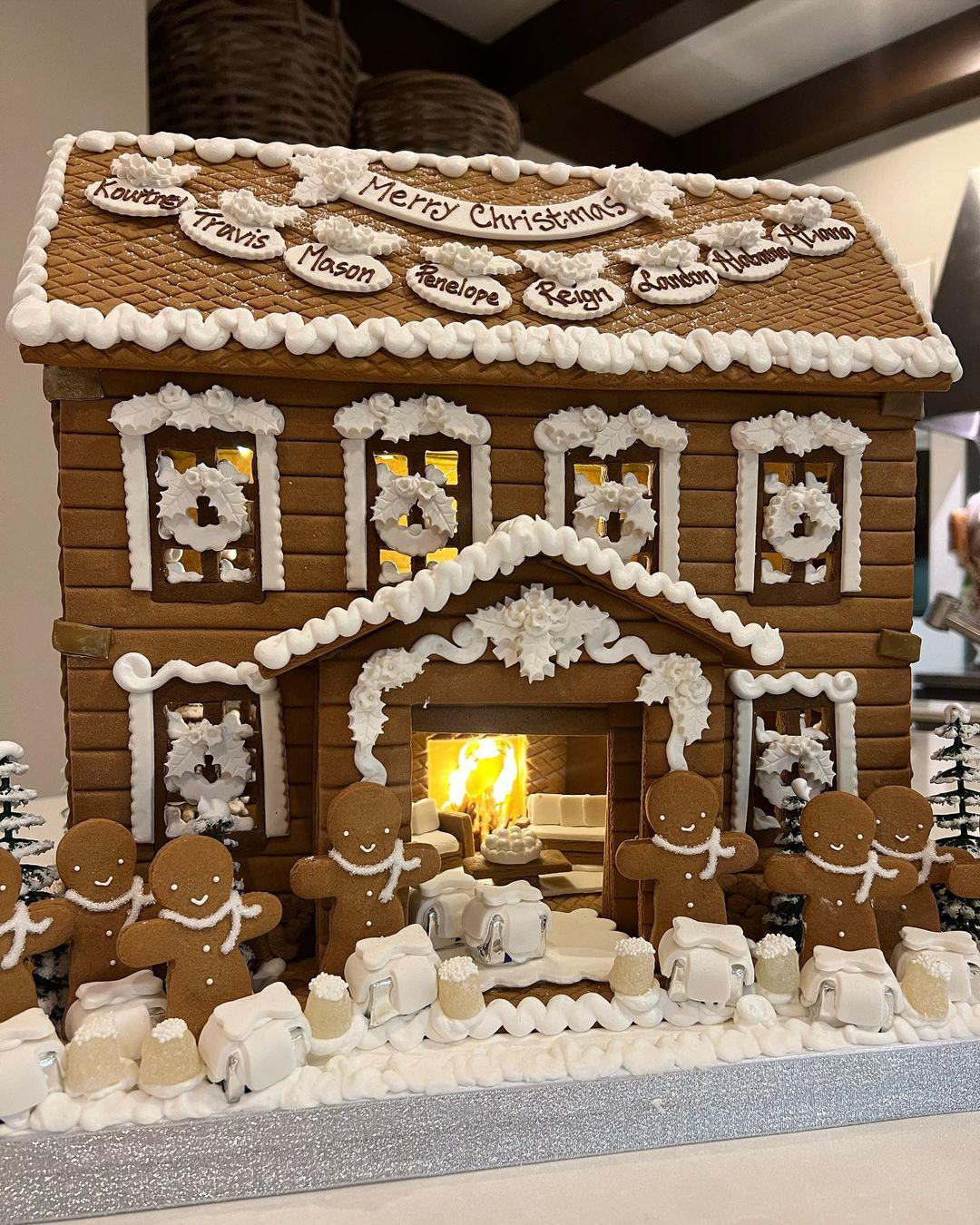 The Jenner Communications founder, 66, has previously sent her children ornately decorated gingerbread houses over the years with matching decor and name tags to reflect their growing families.

‘Tis the Season! Celebs Show Off Their 2021 Holiday Decor

On Friday, Kardashian also shared a snap of the giant sweet treat via her Instagram feed, alongside a “photo dump” post on Friday, which she captioned, “mood board.”

In her Instagram gallery, the California native also posed with her 46-year-old rocker beau’s daughters (Alabama, 15, and Atiana, 22) while the Barker Wellness founder played a game with her son Reign, 6. Kardashian then shared a look at the fairy lights hung up outside their abode and a collection of “Elf on the Shelf” dolls.

The Blink-182 drummer, for his part, commented on his love’s post, writing, “Everything I love 🖤,” while his teenage daughter — he shares her and Landon, 18, with ex-wife Shanna Moakler — added “❤️🙌🔥.” (Atiana is the rocker’s stepdaughter, whose birth parents are the former pageant queen and Oscar De La Hoya.)

While the Safely founder’s gift seemingly addressed her eldest daughter’s current blended brood, it notably left out Scott Disick. Kardashian previously dated the Talentless entrepreneur, 38, from 2006 to 2015. The pair, who costarred on Keeping Up With the Kardashians, share Mason, 11, Penelope, 9 and Reign.

Kourtney Kardashian and Travis Barker’s Sweetest Quotes About Each Other

While the former couple peacefully coparented their three children for years, things hit a snag amid her romance with the drummer, whom she got engaged to in October.

“The only one he’s been having problems with is with Kourtney,” a source exclusively told Us Weekly in November of the Flip it Like Disick alum, noting their relationship was “still strained,” but he remained close with her family.

The insider added at the time, “He’s always been close to Kris. He truly thinks of her as a second mom. He’s also very close to Khloé [Kardashian]. The Kardashians will always be family to him.”

While the New York native was seemingly excluded from his ex’s pre-Christmas celebrations, he spent Hanukkah with his little ones earlier this week.

“Family first,” Disick captioned an Instagram Story snap of Mason, Penelope and Reign watching him light a menorah on Wednesday, December 1. In another pic, he noted that his youngest son was a “happy little fella” while opening presents.

Alec Baldwin Admits His Career Could Be Over Following Fatal 'Rust' Accident: 'I Couldn’t Give a Sh** About My Career Anymore'