One of Melbourne’s major COVID-19 testing clinics had more clients on Thursday than on any other day since it opened last year, with overall numbers twice as high as they were in August, when the state was in lockdown.

Public health experts have called for more testing sites to open and for a greater reliance on rapid, at-home testing to deal with demand, after people reported lengthy queues at inner-Melbourne testing sites this week. 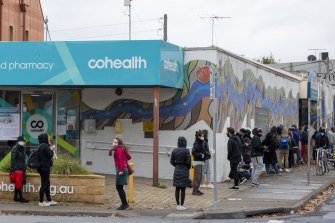 Eleven clinics in greater Melbourne were over-capacity on Thursday with queues around the block at the St Vincent’s Hospital in Carlton as people waited for as long as four hours for a test. Lines were more manageable on Friday.

People lining up at The Alfred hospital after 9am on Friday were still faced with a two-hour wait. The line was an hour-and-a-half at the Royal Children’s Hospital and at clinics in Albert Park and Bourke Street.

Victoria’s Health Department said the average waiting time for testing during the past week has been between 40 minutes and an hour. Waiting times are generally much shorter in the afternoon.

Testing numbers have grown five-fold since the start of the pandemic, with the most significant jump occurring in recent months. Daily tests were as low as 22,000 in early August, with averages about half as strong as the past week. Victoria recorded 66,784 tests on Friday.

The cohealth facility in Parkville recorded its biggest day on Thursday when 589 people were tested, up from a daily average of 350 in the past fortnight. The same clinic was testing 250 people each day in March and between 70 and 120 when it first opened last November.

A spokeswoman for the community health facility – which has boosted its capacity with extra tents and casual surge staff – said there was room to withstand much greater demand but that there was a physical limit on how many people could safely wait in line at any given time.

The Alfred said testing numbers were stable at about 500 a day, but that demand was concentrated in a morning rush with fluctuating waiting times.

Testing facilities over-capacity at some point on Thursday

There are 260 state government-run testing sites in Victoria, an increase from 212 in May.

Twenty-eight federally funded respiratory clinics also provide testing but all but five will stop testing asymptomatic people who are close contacts at the end of December, Victoria’s Health Department confirmed.

​​Deakin’s chair of epidemiology Catherine Bennett said more testing sites were needed to accommodate those preparing for end-of-year holidays and during heightened concern about the new Omicron strain.

“I do worry that the build-up to Christmas is going to put a load on the testing, which might make it harder for someone who’s actually got symptoms or has an exposure to get tested,” Professor Bennett said.

She encouraged people concerned about long waiting times to use rapid antigen tests at home for a “first check” if they had symptoms but had not been exposed to the virus.

While demand for PCR tests has held firm in Victoria, the state is turning to rapid home-tests at almost twice the rate as those in NSW at bricks and mortar Woolworths supermarkets.

Almost half of all tests bought online from healthylife have also been shipped to Victoria, particularly in areas linked with outbreaks, and demand was still increasing in the lead up to Christmas.

Paul Guerra, the chief executive of the Victorian Chamber of Commerce and Industry, has been advocating for testing requirements to be softened to help businesses maintain staffing levels.

Rather than requiring people to test and isolate, the chamber wants people who have been to an exposure site but do not have symptoms to instead take a rapid antigen test. If negative, Mr Guerra says they should be able to remain at the workplace but take a PCR test within 24 hours.

Danni Hunter from the Property Council said she had not seen issues with the latest, watered-down test and isolation requirements.

Dr Mukesh Haikerwal, who runs a private clinic at Altona North, in the city’s west, has been testing about 80 people a day and said maintaining the service was sometimes tough to manage.

Twelve of his staff were furloughed last week and another four this week, after being exposed to the virus. It meant he had to turn people away who had shown up to his clinic, due to it being over capacity.

“We were completely slammed anyway, and then we haven’t actually got the staff to do the work.”

Still, the clinic is overstretched, facing peak demand during the last lockdown, when people waited in hour-long lines. Dr Hodgson had to employ family and friends to help keep up with demand.

Australian Medical Association Victoria president Dr Roderick McRae said it was vital that Victoria’s testing sites were as efficient as they could be.

“It’s very good, of course, that people are presenting to be tested. That’s a very important stage of monitoring the spread of COVID-19, so it’s disappointing that it appears to be taking so long when people have to queue up.”

Shadow health spokesperson Georgie Crozier, whose constituent waited in line for 4.5 hours on Thursday, said the government had had months to get its testing regime right.

“The government must assure Victorians that they’ve got capacity to meet demand,” Ms Crozier said.

The Health Department recently changed the opening hours of testing sites to 7am to 7pm to cater for morning demand peaks.

A spokesman said changes to the state’s testing operations in October created six mass testing centres, with new sites and additional lanes at drive-through sites which increased testing capacity by 55 per cent.

“Testing remains vital and we thank Victorians for continuing to get tested in such strong numbers,” the spokesman said.

“We know the morning is the busiest time for testing, which is why we’re now opening some sites earlier to cater for the morning peak.”