Media watchdog ACMA has found that veteran broadcaster John Laws breached the commercial radio code with “dangerous” and “highly offensive” remarks made during a March 2020 segment of his morning talkback show.

The segment, broadcast on 2SM’s The John Laws Morning Show on March 27, 2020, found the host replying on-air to a critical email from a regular listener who called him “lousy”. In his response Laws referred to the listener as “mentally deficient” and urged them to “say something constructive, like you’re going to kill yourself”. 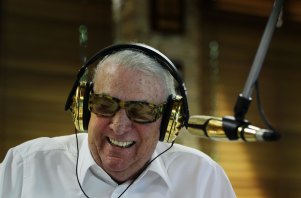 John Laws, pictured in 2011. The veteran broadcaster has been found to have breached the radio code with remarks made on-air last year.Credit:Kate Geraghty

The investigation by ACMA (Australian Communications and Media Authority) found that the segment breached multiple provisions of the Commercial Radio Code of Practice 2017, including not meeting “generally accepted standards of decency” and “presenting suicide as a means of achieving a desired result”.

It also found that 2SM’s licensee 2HD had breached rules around complaints handling, which require a broadcaster to respond to a complaint within 30 business days. The report stated that while a listener lodged a complaint with the radio station on 30 March 2020, they did not receive a “substantive response” until 29 June 2020.

In line with wider media guidelines on the issue, the Commercial Radio Code of Practice prohibits licensees from broadcasting content that depicts suicide favourably. It also prohibits content that is “derogatory towards, or stigmatises, people with mental illness.”

According to ACMA’s investigation, Laws’ remarks drew a complaint from a fellow listener who was concerned for the caller. In an email sent to 2SM, the complainant wrote, “Depression and mental illness are extremely serious and real problems for many people in our society, and for a man of authority, like your presenter, to flippantly tell someone, a listener of your station, to kill themselves, is disgraceful.”

The report found that Laws’ comments “appeared to trivialise what is a serious issue in the Australian community”, and that “the use of mental illness as an insult, and the suggestion that suicide could be ‘constructive’, conveyed a lack of care for the potential impacts of the comments on the community.”

“ACMA considers that the ordinary reasonable listener, including the target audience of the program, would consider using mental illness and suicide as a vehicle to publicly insult an individual to be both dangerous and highly offensive and contrary to community expectations of contemporary broadcast material in Australia,” the report stated.

The actual penalties against 2SM and Laws’ breaches are minor. A spokesperson for ACMA said it had accepted measures offered by the licensee to improve future compliance, including addressing the complaints handling system, staff training and “reinforcement with the presenter of the role the code plays in providing community safeguards”.

The John Laws Morning Show is broadcast on weekdays between 9am-12pm on AM station 2SM from Sydney, and is networked on Super Radio Network stations across regional NSW and Queensland.

Laws, 85, has previously earned the ire of the broadcasting watchdog. In 2014, ACMA found he’d breached the Code’s privacy provisions after he read out on air the full name and phone number of a listener who’d criticised his program.

'Coming 2 America' Premieres One Day Ahead of Schedule