The national jobs market is in a strong position to absorb many of the 1 million Australians coming off the government’s JobKeeper wage subsidy, with figures revealing a record number of vacant positions.

Figures from the Australian Bureau of Statistics on Thursday revealed there were 289,000 job vacancies across the country in February, up 61,000 on a year earlier just ahead of the coronavirus pandemic. 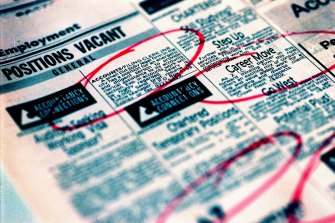 Job vacancies are at their highest level on record, suggesting a soft landing from the end of JobKeeper.Credit:Louise Kennerley

There have been fears the jobs market would struggle to accommodate those still relying on JobKeeper when it wound up on Sunday. Treasury estimates up to 150,000 people supported by the wage subsidy could end up unemployed, while others may lose hours.

The ABS data revealed that since May, when vacancies all but disappeared, they have more than doubled in almost every state and territory.

Victoria in February became the last area to have as many vacancies as before the start of the pandemic. The most vacancies are in NSW, at almost 95,000, while there are 65,600 in Victoria.

ABS head of labour statistics Bjorn Jarvis said vacancies had increased by 14 per cent since November.

“This reflected the pace of recovery in labour demand over the second half of 2020 and early 2021, and labour shortages in some industries,” he said. “When we asked businesses experiencing labour shortages the reasons for this, more than usual noted difficulty in filling vacancies for lower-paid jobs.”

In a positive development, there was a 14 per cent jump in the number of private-sector job vacancies in the quarter to be 29 per cent higher than a year ago. The private sector accounts for nine of every 10 vacancies.

Public-sector vacancies rose by 11 per cent in the quarter to be 13 per cent up on a year ago.

The biggest increase by industry has been hospitality, with vacancies up by 88 per cent, while construction is up by 60 per cent. Despite this increase, the actual number of people employed in these sectors is still well short of their pre-virus levels.

Asia-Pacific economist with job website Indeed, Callam Pickering, said there were now 2.9 unemployed people for every vacancy, the lowest proportion since just before the global financial crisis.

He said vacancies were usually a good sign for future employment, adding that Indeed had noticed a pick-up in demand through March.

“[But] while vacancies are high, that doesn’t necessarily mean that the labour market itself is strong,” he said.

“Vacancies are a sign of future employment but we are likely years away from an unemployment rate in the low 4 per cent region – a level that is necessary to foster high wage growth across the country.”

The national jobless rate dropped half a percentage point to 5.8 per cent in February, its best result since March last year. But there are still more than 800,000 people unemployed in Australia and another 1.2 million under-employed people.

CommSec senior economist Ryan Felsman said despite the end of JobKeeper, jobs growth was expected to be solid over 2021 outside of areas such as tourism, arts and recreation.

“There are reports of skills shortages emerging across the strongly performing sectors of the economy and mismatches between workers’ skills and employer’s job specifications. Prolonged international border closures could exacerbate skills shortages,” he said.