Home » Jenny Beavan on Creating the Sartorial World of ‘Cruella’

Jenny Beavan on Creating the Sartorial World of ‘Cruella’

Before infamous villain Cruella de Vil was poaching puppies for fur coats, she was a young grifter (and aspiring fashion designer) in the ’70s London punk rock scene.

Disney’s latest live-action film, “Cruella,” serves as an origin story for the animation. Emma Stone stars as the titular character — birth name Estella — in her young adult years, when she is hired to work for esteemed fashion designer The Baroness, portrayed by Emma Thompson.

Costume designer Jenny Beavan, OBE, came into the project with firsthand knowledge of the era. “I remember the fun of it. It was an exciting time in clothing and music,” says Beavan, reflecting fondly on the period’s fashion: hefty lace-up boots, trousers with flowers purchased for three pounds a pair from Kensington Market. But unlike Cruella, Beavan didn’t have her eye on a career in fashion back then.

“The story was strong, the characters were great,” says Beavan of the appeal of “Cruella.” “It was a wonderful challenge, and it was something different. I hadn’t really done the period and I hadn’t done that kind of Disney [film].”

Director Craig Gillespie already had a solid visual outline for the film, which Beavan used as a starting point to create her mood boards to convey her sartorial plan for the story. For Cruella, Beavan stuck to the character’s iconic color palette, rooted in black, white and red. As the character becomes darker throughout the film, so do her costumes. “The whole look becomes sharper, more tailored, more Cruella-y,” says Beavan. 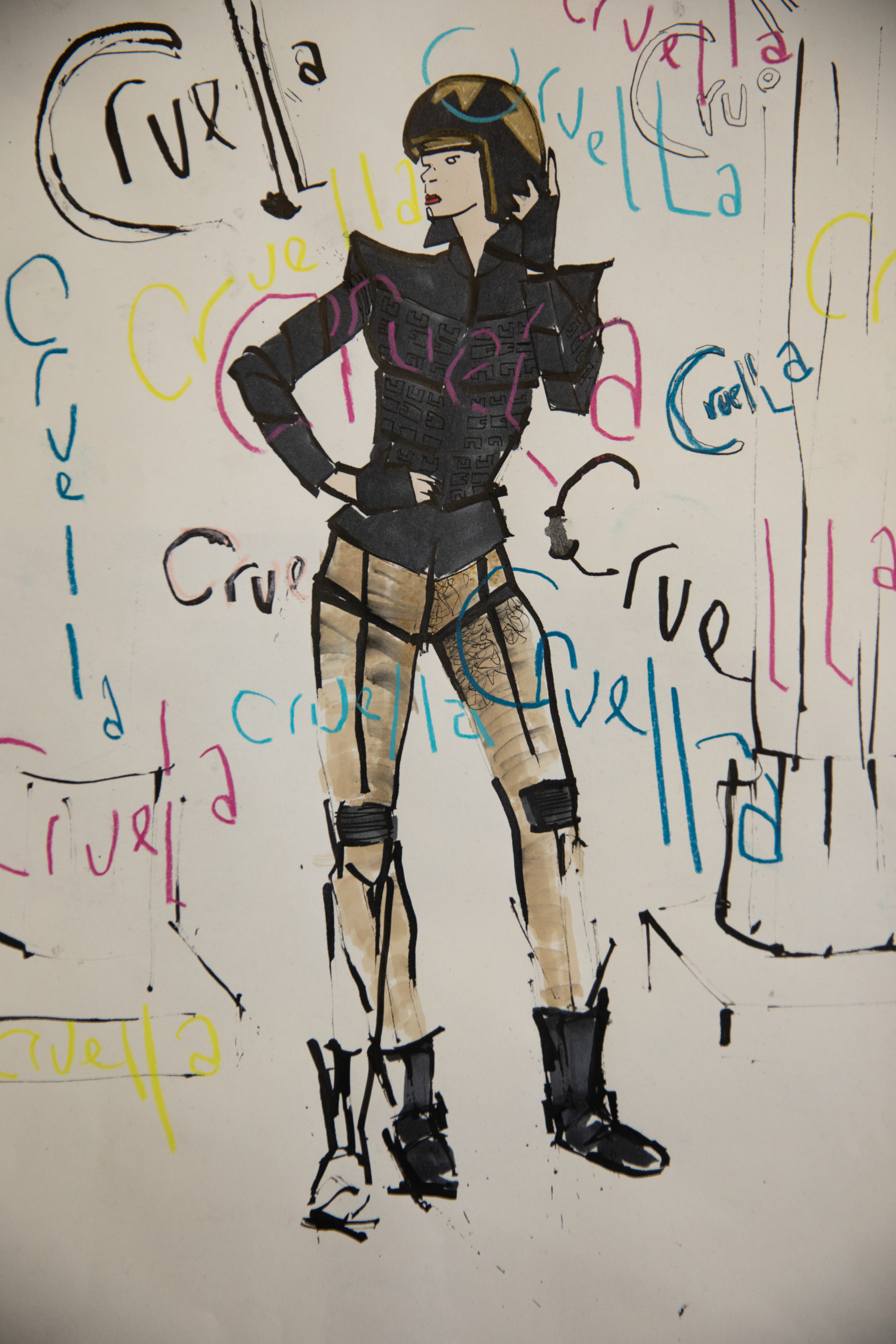 Beavan’s team had a short period to produce an extensive portfolio of original looks for the film — 10 weeks, plus an extra six weeks while Stone recovered from a shoulder injury. Beavan sourced fabrics from shops in L.A., Atlanta, and London — most costumes worn by Kirby Howell-Baptiste, who plays a reporter in the film, feature ’70s-style prints found at Mood Fabrics. For other looks, particularly those included in Cruella’s fashion show, they custom-printed fabrics.

The costume team included five cutters, who Beavan credits for bringing their own skills and interpretations to the project. “If you let people have some freedom, and you give them the sense of things and see what happens, sometimes it turns out really well,” she says.

One of those instances is an homage to Charles James’ twisty “Tree’ dress, worn by Cruella in particularly dramatic fashion. “The cutter of that dress always wanted to make one,” says Beavan, adding that there was the extra challenge of creating a dress out of an existing one. 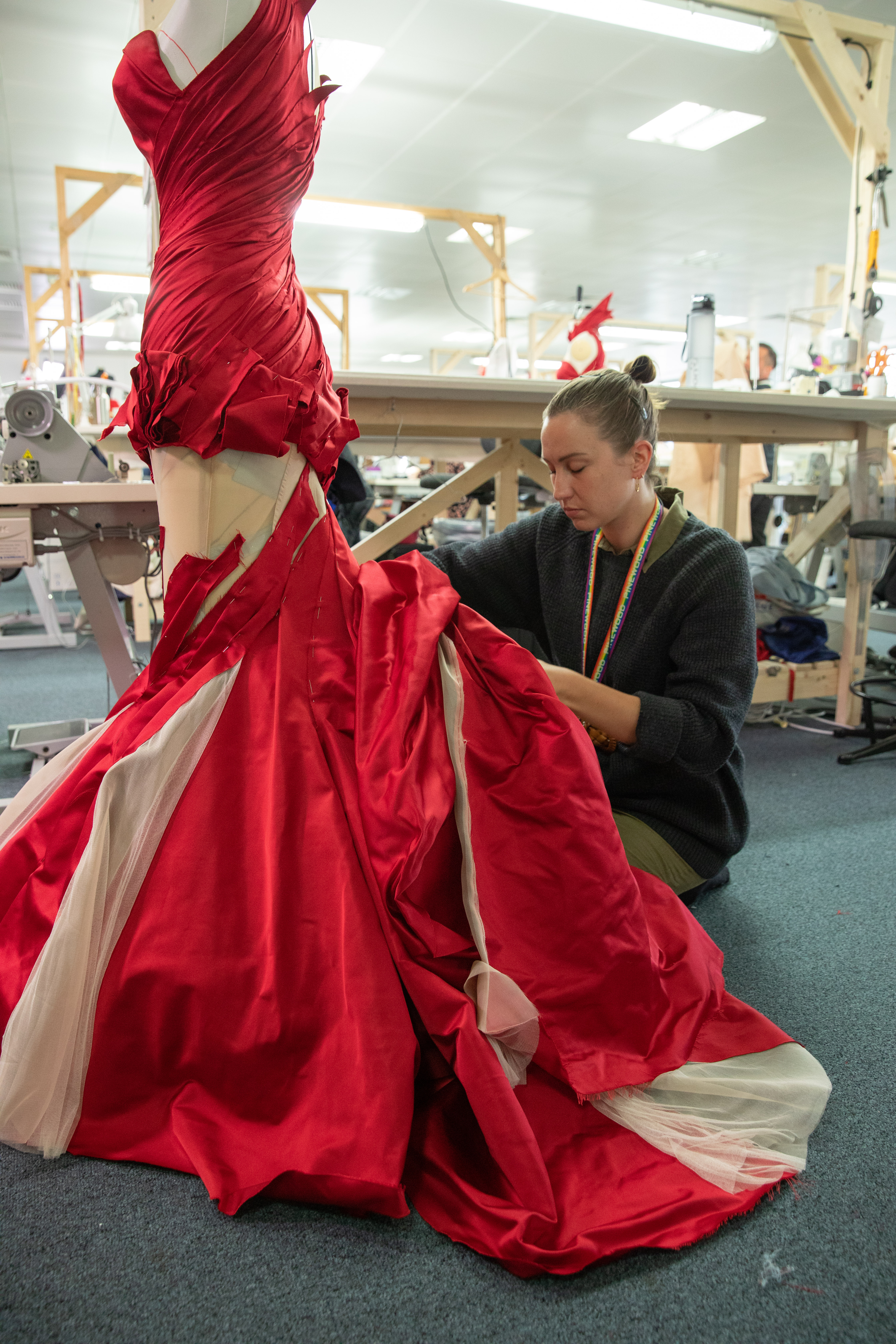 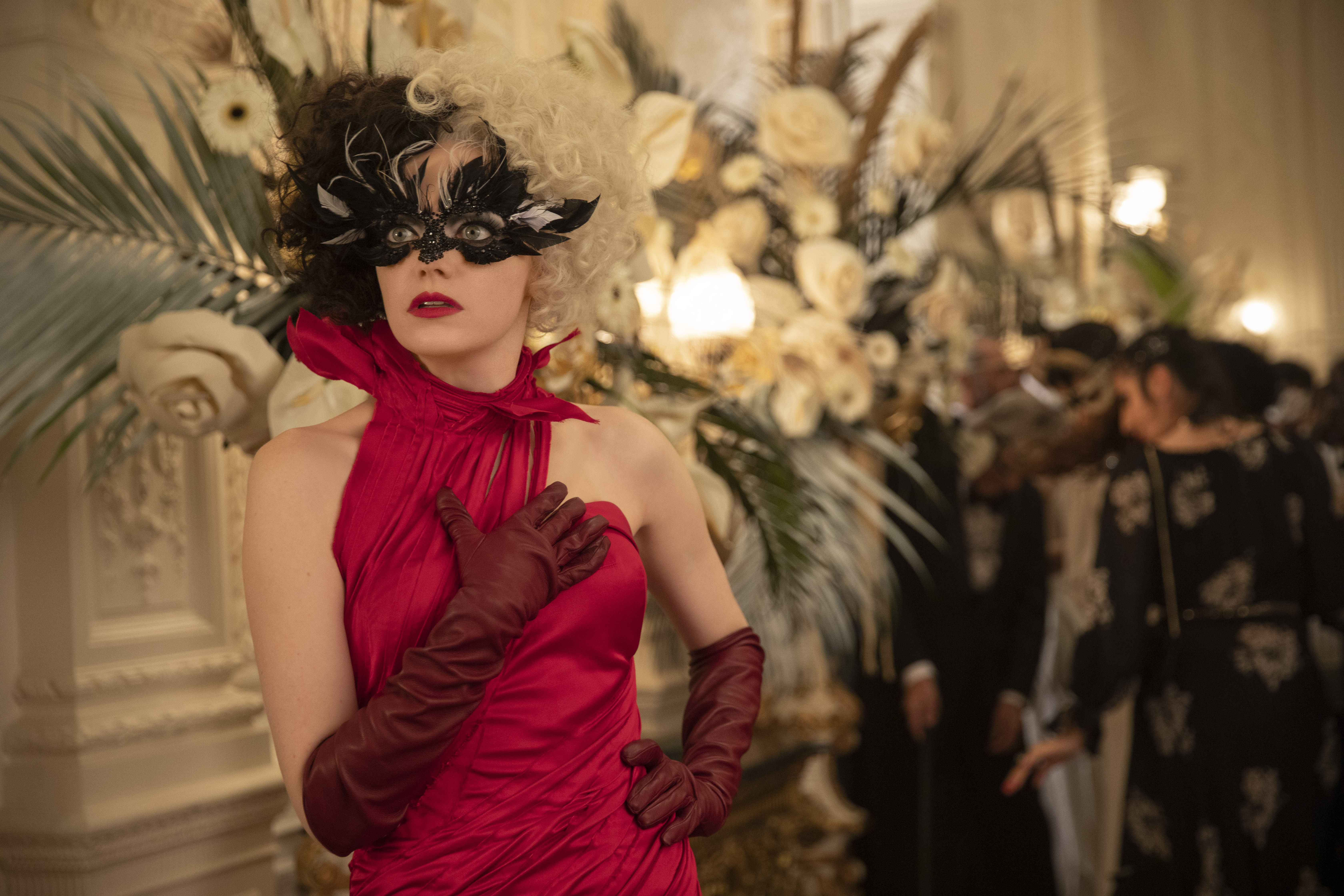 “In the script, Cruella finds a red dress, that was the Baroness’ old dress, in a vintage store in Portobello. Out of that dress, she recuts it,” says Beavan. “So we had to get a dress that had enough fabric in it, so we could just about believe that this new dress came out of the old dress.”

In another scene, Cruella rides off on the back of a dump truck as her dress unfurls a 50-foot train constructed from The Baroness’ recent fashion collection. But while Cruella has several grand costumes in the film, Beavan notes a particular affinity for its most simple looks.

“I love some of her earlier looks when she starts to work at Liberty London, and when she was starting to work for the Baroness,” says Beavan, who put Cruella in culottes and little jackets and funky accessories — “bits and pieces.” (As a young aspiring fashion designer, Cruella would surely have been impressed by Stone’s Louis Vuitton ambassadorship — one of the character’s early looks is accessorized by a Louis Vuitton Capucines bag.) 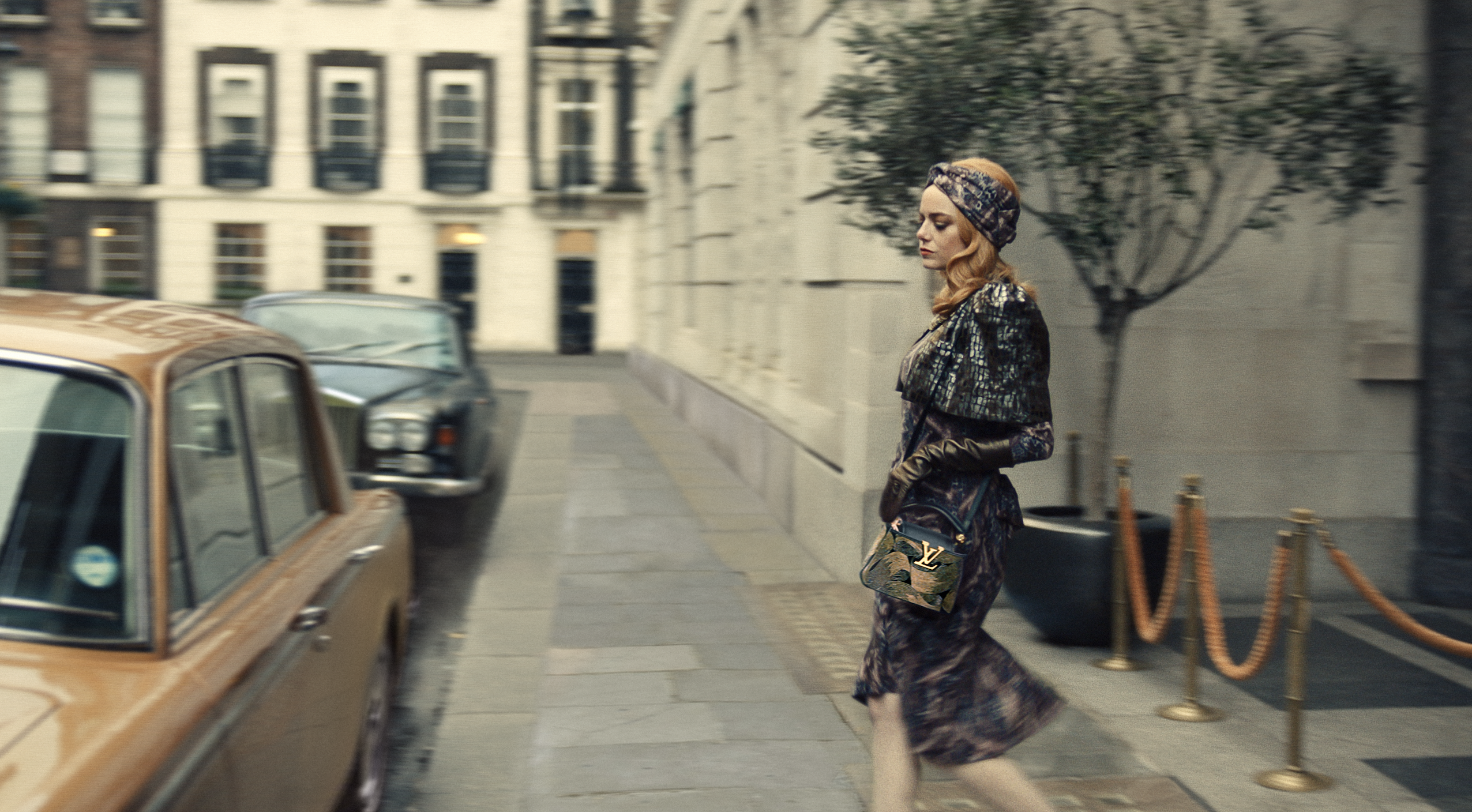 A still from “Cruella.” Courtesy

The Baroness, the movie’s central antagonist, serves as a counter to the youthful, eclectic fashion scene from which Cruella emerges.

“The Baroness is a very good designer; she’s just slightly old-fashioned,” says Beavan, who based the character’s tailored looks on Dior’s New Look aesthetic. “I chose fabrics that had a certain structure to them so we could be sculptural,” she says, adding that she rooted those costumes in brown and gold tones.

Beavan spent even more time with Dior’s designs after “Cruella,” working on the film adaptation of “Mrs. Harris Goes to Paris.” (In the book, set in 1950s London, a cleaning lady becomes enamored with a couture Dior dress.) For now, Beavan is enjoying a short break back home in London. She recently returned after several months in Prague, where she was working on the World War II-era film “White Bird: A Wonder Story.” While there, she watched a final cut of “Cruella” for the first time, and liked what she saw.

“I’d love to see it again on a bigger screen,” she adds.

She’ll get the chance soon enough — the movie is being released in theaters and Disney+ on Friday. 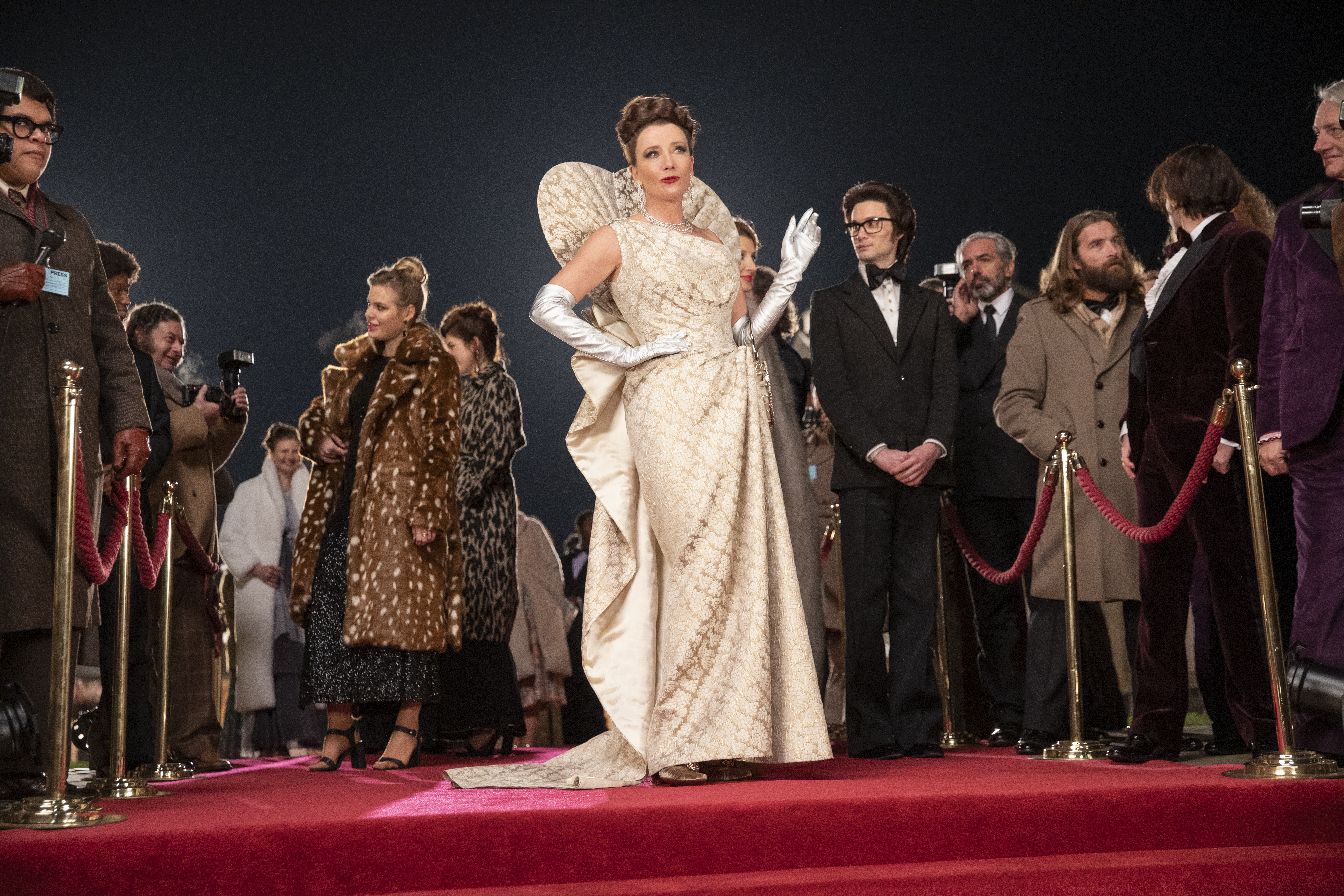 More from the Eye:

Watch Out for Måneskin at This Year’s Eurovision Song Contest

5 New Rooftop Bars to Toast the Start of Summer

What happened to Captain Pruitt Herrera on Station 19?
Recent Posts