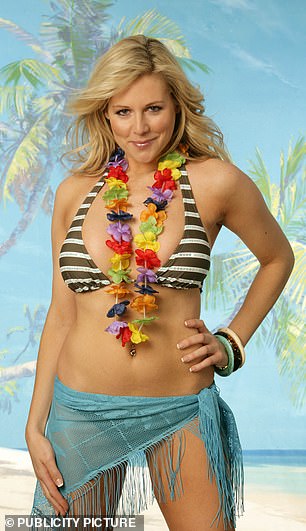 Former lads’ mag favourite Abi Titmuss whirled back into the news this week when her former boyfriend John Leslie was found not guilty of sexual assault. Abi was loyally at his side when Leslie was cleared of sex charges back in 2003, although their relationship did not survive the scandal

At long last. A blast from the past who has undergone a complete recast.

Former lads’ mag favourite Abi Titmuss whirled back into the news this week when her former boyfriend John Leslie was found not guilty of sexual assault.

Abi was loyally at his side when Leslie was cleared of sex charges back in 2003, although their relationship did not survive the scandal.

Today she is an actress in LA, where she lives with her husband and three-year-old child, proving that sometimes you have to go through several versions of yourself before you find the one that truly fits.

Abi was once a senior staff nurse in charge of a 23-bed emergency unit. ‘Then I went from caring for sick and dying people to taking my clothes off — and it never quite made sense,’ she once told me.

We met when she was trying to reinvent herself as a Shakespearean actress, playing Lady Macbeth in Lowestoft.

What I remember about her was how determined she was — and also how nice.

She dreamed that one day she’d be able to put everything behind her ‘get married and have a cottage with roses around the door and a dog’.

Could a former nurse, glamour girl, reality show contestant and pin-up really escape her past?

It looks like Abi has — and I am thrilled for her. 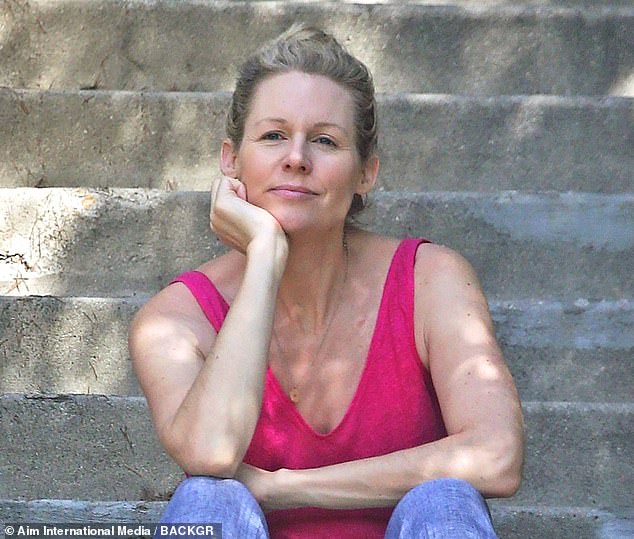 Standing by flawed men can be dangerous but brave

Sometimes it’s hard to be a woman. Giving all your love (and support) to just one man. Especially when that man is in trouble. 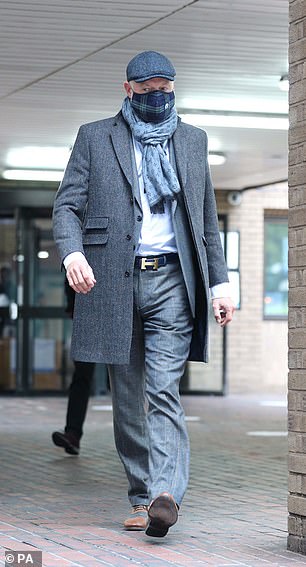 This week saw another show of celebrity girl-power in court. The former Blue Peter star John Leslie was supported by a number of his female co-stars before being found not guilty of sexually assaulting a woman at a party over a decade ago

When he is vilified, pilloried and much maligned in the public eye. Caught with his hand in the nookie jar or — even worse — standing in the dock in a courtroom accused of assaulting other women. What do you do then, sister?

We saw with our own saucer eyes how Catherine FitzGerald stood by Dominic West after compromising photographs of her husband with Lily James in Rome were published earlier this month.

‘Our marriage is strong,’ the couple wrote in a note to the world, the tacit explanation perhaps being that kindly Dominic had gone to Italy merely to coach the young actress in how to ride a scooter properly. Tight grip, smooth balance, kick when you want to go faster? Lily certainly looked like she had learned her lesson well.

When Johnny Depp was accused of wife-beating, the women in his life quickly rallied to the call.

During his libel trial in London earlier this year, former partners Vanessa Paradis (mother of his two children) and Winona Ryder (former girlfriend) both gave witness statements saying that the accusations against Depp by his ex-wife Amber Heard were ‘upsetting’ and that he was a ‘kind,’ ‘respectful’ and ‘protective’ man.

In the end, the women were not called upon to give evidence in the High Court, although their statements were released to the media and therefore appeared in the court of public opinion anyway.

This week saw another show of celebrity girl-power in court. The former Blue Peter star John Leslie was supported by a number of his female co-stars before being found not guilty of sexually assaulting a woman at a party over a decade ago.

Anthea Turner, Diane Louise Jordan and Fern Britton were among those who defended the ‘gentleman’ presenter.

Anthea was just one of the stars who actually took the stand at Southwark Crown Court in London to give evidence on Leslie’s behalf.

When asked about the sexual assault claim against her friend, she said: ‘The allegation does not sit at all well with me. This is not the man that I know, not at all.’

She told jurors there were two Johns; the ‘life and soul of the party’ she first met in the 1980s and the one who ‘crumpled’ after indecent assault allegations were first made against him in 2003.

From then on, she says, he was constantly on edge and watchful in public. All the women who worked with him ‘loved him’ apparently.

All very marvellous and certainly must have warmed the heart-cockles of Leslie and his defence team.

But should such parti pris supportive statements have any merit in a court of law? Especially if made by a somebody who is not a nobody: a somebody whose words might just carry more weight than a nobody’s?

Wives such as Catherine FitzGerald standing by their husbands is one thing. Celebrities harvesting their contact books for the starriest names to stick up for them in court is something else.

For in these celeb-obsessed times, there is an increasing concern that luminaries in trouble use their famous pals as human shields in courtrooms, with everyone involved trying to weaponise their celebrity in a bid to dazzle judge and jury alike.

Remember that his ex-girlfriend Catherine Zeta Jones beamed in from Hollywood to offer her support during his time of duress.

Vanessa, Winona, Anthea, Catherine and the gang all stepped up when the man they love or have loved needed them most. Yet none of these women were witnesses to any of the allegations. How can they truly know what went on? They can only speak of best behaviours; the side of the man they know or knew.

Johnny was kind. John was a gentleman. The nasty accusations didn’t ‘sit well’ with Anthea. Yet just because Depp and Leslie were considerate and kind to their girlfriends and female colleagues, does it automatically follow that they would treat all females with the same respect?

Of course not. One wonders what the point of all this celebrity support is, or indeed if there is any point to it at all.

However, after much soul-searching I have to conclude that surely it has to count for something. For both men belong to an age of toxic celebrity in which the law and the media have become enmeshed.

Cynics might believe that fame has protected Johnny Depp and John Leslie from justice for years.

In the latter’s case particularly, it seems more likely that it has cruelly exposed him to a corrosive and ongoing injustice instead. (And, of course, we are still waiting for the decision on Depp.)

That’s why I believe all these women coming forward to vouch for these flawed men is so admirable. Even brave! Don’t forget that by doing so, their hard-won reputations were at stake, too; they took no small personal and professional risk.

At the very least, they could have faced ridicule and approbation themselves, not to mention the deeper censure of the global sisterhood who regard all men as evil lunatics forever at the mercy of palpitating sexual urges.

Yet in the name of loyalty and love, they went ahead and did it anyway.

Covid kids will pay in the end

Throughout this long and difficult summer, I have watched aghast as young people asserted their rights to party on down, no matter what.

My octogenarian mother has spent most of this year more or less trapped in her house.

Like many other vulnerable elderly, she has obeyed lockdown to the letter — how infuriating for her and millions like her to see the wanton disregard of others.

Not least of all the students who have been fined £10,000 each and suspended from Nottingham Trent University after hosting lockdown-breaching house party with 30 revellers. It’s quite a price to pay, in more ways than one.

Yet as Covid-19 infection rates in England’s five worst-hit student areas have halved in a week, perhaps the message is getting through.

Can’t those who risk that last holiday or drink not see the seriousness of it?

They are jeopardising their futures for a short-term thrill. And in the long run, they are the ones who will have to pay.

Meals decision is hard to swallow

Giving Marcus Rashford an MBE, then refusing his plea for more free school meals in the holidays? It doesn’t make any sense.

If the Conservatives can find the funds to subsidise Eat Out to Help Out and pour billions into the tottering restaurant industry, deciding not to give poor children lunch in the school holidays looks callous and uncaring.

No, I don’t believe that 1.4million disadvantaged children live in poverty in England, their parents unable or unwilling to open a tin of soup for their lunch.

Surely that is child neglect, not child poverty. Nor do I believe that giving children a £15 lunch is a solution to the problem.

But in the absence of anything else, couldn’t they have just carried on for the time being?

Sometimes this Government does itself no favours at all.

Speaking of Lily James, and frankly who isn’t, one of her latest projects is starring as the second Mrs de Winter in a new Netflix adaptation of Daphne du Maurier’s Rebecca — alongside Armie Hammer and Kristin Scott Thomas as the evil housekeeper Mrs Danvers. In an interview to promote the film, Lily said that she thought that the famous novel was ‘really about social media in a way’.

Girfriend, I am rofling!

A female schoolteacher was passed over for a job which was given to a less qualified man, apparently because he had a firm handshake and she did not. What? 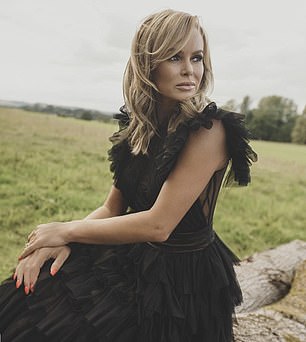 This seems manifestly unfair — and even illegal. But what I am asking myself is do the same rules apply in showbusiness?

News has leaked that Amanda Holden (right) and Alesha Dixon earn half or less than half the fees paid to Simon Cowell and David Walliams on Britain’s Got Talent.

But this doesn’t seem sexist to me — it seems about right. Amanda and Alesha get paid less because they are lesser stars with a lower value on the showbiz stock exchange — not because they are female.

It is a complicated world. Who knows how many Amandas equal a David, whether or not Holly and Phil deserve the same and should Prue get a bigger slice of the cake than Paul? (Answer — yes.)

It is all a mystery rather than an exact science. And it doesn’t do women any favours to blame their gender for their value.

However, surely the exceptions to the rule are the female Strictly pro dancers, who should get paid more than their male counterparts as a matter of course. After all, as Ginger Rogers said, they have to do everything the men do, but backwards . . . in high heels.