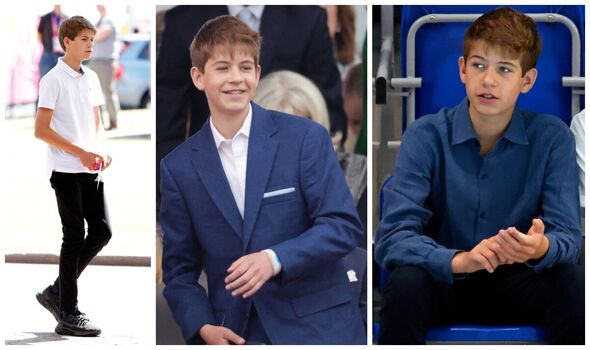 James, Viscount Severn, is the youngest grandchild of the late Queen Elizabeth II, and one of the most rarely talked about members of the Royal Family. His parents Prince Edward, 58, and Sophie, Countess of Wessex, 57, chose not to raise him with the Princely title to afford him a more normal upbringing.

James, who is currently 14th in line to the throne, is celebrating his 15th birthday today, making him a Sagittarius.

There are not many Sagittarians within the Royal Family, which could explain why young James comes across as a very unique individual.

Inbaal Honigman, a celebrity psychic and astrologer, spoke exclusively to Express.co.uk to analyse his star, moon and ascending signs to discover more about his character.

She claimed: “Sagittarians are normally bubbly, loud and carefree, but James, Viscount Severn has been notably absent from public life for most of his years.

According to this expert, young James could have grown into being a different person had he not been born a royal.

She explained: “Had James been born to a standard family, with no prospects of fame, he may well have turned out to be a vivacious and entertaining individual, but Sagittarius is a sign that requires a great deal of freedom, too.

“Sagittarius is a sign that doesn’t like to be told what to do. They make up their own mind and prefer to live their lives according to their own views.”

This star sign is rare in the Royal Family – so the expert is unable to directly compare James to any other royal member.

But Inbaal does note that this star sign is best suited “behind closed doors”, especially if the individual is more extroverted.

She suggested: “In a Royal Family, it’s easier for a Sagittarius to be themselves behind closed doors, and let their lively, funny personality shine in the safety and confines of the home, not in front of the public.

“An astrological birth chart is more than just the Sun Sign and James’s other signs in his chart point to a preference for privacy.

“His ascendant is Cancer, which tells us that his inner persona is like a Cancerian. In the Royal Family, there are many Cancerians, like Prince William, Camilla the Queen Consort, Prince George and the late Diana, Princess of Wales.

“Cancerian qualities are privacy, gentleness and kindness. James has his Mars, the planet of passion in Cancer as well, which means he doesn’t have much of a temper.

Inbaal opines that as James grows up, he could develop other qualities associated with his star sign that the public has not seen yet.

She explained: “People generally mature into their sign, and there’s every chance that James will develop the Sagittarian qualities of confidence and leadership as he grows in years.

“The late Queen’s own father, King George VI was a Sagittarian, who, like James, Viscount Severn, preferred to lead a quiet life, but accepted his enormously public fate when duty called.”

James lives with his parents, Sophie and Edward, in Bagshot Park, a sprawling 120-room mansion in Surrey.

His older sister, Lady Louise Windsor, 19, has moved to Scotland for four years to study at St Andrews University, the same university that Prince William and Kate Middleton famously attended.

Emmerdale spoiler video: Nate suspects Mack as Chloe is made homeless for Xmas