A young father will serve up to 10 years in jail for fatally stabbing an innocent woman in a frenzied attack "for no discernible reason". 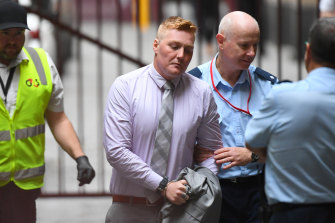 Travis Wills is led into court on Wednesday. Credit:AAP

Supreme Court Justice Paul Coghlan said it appeared Ms Galea walked in on a family dispute and said something Wills objected to, before he attacked her.

One of her stab wounds proved fatal, penetrating 12 centimetres into a major artery.

"The stabbing was of itself apparently rapid and random," Justice Coghlan said on Wednesday.

"Raichele Galea has lost her life for no discernible reason. That is very serious." 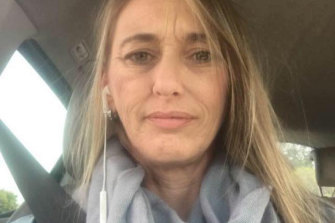 44-year-old Raichele Galea died after an assault in a house in Geelong in June 2017.Credit:AAP

Wills, his mother and aunt had been drinking alcohol, smoking cannabis and popping anti-anxiety pills at his aunt's unit in the lead up to the killing.

He became angry at his mother for something she said to his girlfriend, who was then pregnant, and punched her.

He then targeted Ms Galea, an innocent bystander, causing her "unnecessary" and "pointless" death.

"It's very difficult to say what happened, but I conclude you were very angry over the incident involving your mother and you then took offence at something Ms Galea said to you, which led to the attack," Justice Coghlan said.

In the aftermath, Wills hid in a car boot for more than an hour, gave police a false alibi and tried to implicate his mother and aunt.

Both testified at his trial, but the judge found neither truthful.

Justice Coghlan found Wills' intoxication was a major feature of his crime and did not accept the killing was a result of a robbery gone wrong.

The sentence will be of little comfort to Ms Galea's mother Margaret Galea, whose grief was profound.

"Her life has been altered dramatically by the loss of her daughter. It can only be hoped she'll be able to see life more positively in the future," the judge said.

Wills was charged with murder but convicted by a jury of the lesser charge of manslaughter.

He has repeatedly denied responsibility.

The court heard he had little education and came from a dysfunctional family marred by alcohol and drug abuse, taking substances from a young age.

While Wills had some rehabilitation prospects, the judge was unable to say how good they were.

He will serve a minimum seven years, taking into account more than two years already spent in pre-sentence custody.