South African novelist Damon Galgut has scooped the £50,000 ($92,000) Booker Prize for his novel The Promise, his account of an Afrikaner family disintegrating in tandem with the apartheid regime. It was Galgut’s third nomination for the Booker, the pre-eminent prize for English-language fiction and arguably the world’s most significant literary award.

Galgut had been hotly tipped as the favourite both by critics and British bookmakers, for whom the prize is one of the big betting fiestas of the year. Speaking on Wednesday night (London time), the award in his hand, Galgut was visibly choked with emotion. 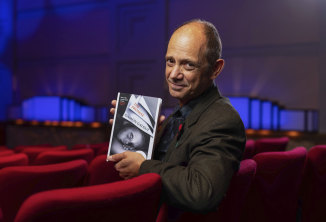 Damon Galgut with his Booker-winning novel, The Promise. Credit:David Parry

“It’s taken a long while to get here – and now that I have, I kind of feel I shouldn’t be here,” he said. “This could just as easily have gone to any of the talented people on this list and a few others who aren’t.

“But since it has fallen to me, I would like to say this had been a great year for African writing. I would like to accept this on behalf of all the stories told and untold, the writers heard and unheard from the remarkable continent I’m part of. Please keep listening to us. There’s a lot more to come!“

After thanking his publishers and his agent, Galgut also thanked the Booker judges. “It’s changed my life. Please know I am profoundly, humbly grateful.“

For most of its 52 years, the prize has been handed over at a lavish dinner at London’s medieval Guildhall. For the second year in a row, thanks to COVID-19, the celebration was reduced to a BBC broadcast, although this year the shortlisted writers were able to attend, spaced out safely along the Broadcasting House Radio Theatre’s front row.

The avowedly bibliophile Duchess of Cornwall, who has supported the prize since 2013, appeared in a recorded interview with last year’s winner, Douglas Stuart. Stuart, who accepted his prize for Shuggie Bain from his sofa in New York, also had his moment on stage; he urged the six authors to savour the moment as much as possible “because it can feel like a fever dream”. 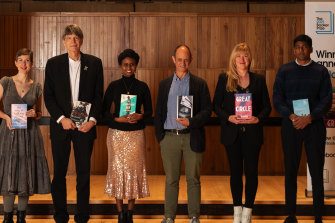 Damon Galgut lives in Capetown, but grew up outside Pretoria, where The Promise is set. His novel traces the decline of the Swart family through four decades and four deaths of successive members of the family. First to go is Ma, linchpin of the family, relatively liberal and Jewish. She extracts the promise of the title from her husband: to give a home to Salome, the black woman who has served them all her life.

Amor, the youngest child, hears him and will periodically press her family to honour the promise as Pa, then her elder sister and finally her brother – the family’s bearer of white guilt – die in their turn. Salome remains on the margins of the story, even though it is ostensibly about her inheritance.

Galgut said he decided early on that her silence would hold its own significance. “The point to be made really is that a woman like Salome, a rural, uneducated black woman, is somebody even in the new South Africa, who still has no voice. And I wanted that to register almost as a physical fact.“

The chair of the judges, Harvard historian Maya Jasanoff, said how difficult she and the other judges had found it to choose between books that were “all terrific – and all shared a sense of innovation, interest and excitement about language and what can be done with stories and all very immersive”.

The Booker judges change each year and always include at least one judge from outside the literary or academic worlds. This year, actor Natasha McElhone and former Archbishop of Canterbury Rowan Williams joined novelist Chigozie Obioma, critic Horatia Harrod as member of the panel. They all read the shortlisted books three times.
“And we arrived at a consensus around a book that is a real master of form, pushes the form in new ways, that has an incredible originality and fluidity of voice and a book that is really dense with historical and metaphorical significance,” said Jasanoff.

The Promise is Galgut’s eighth novel. There were five others shortlisted. Richard Powers, who won Pulitzer Prize for his last novel, The Overstory – also shortlisted for the Booker – was widely regarded as Galgut’s nearest rival. His new novel is Bewilderment, about a widowed father trying to raise a brilliant, neuro-divergent boy consumed with anxiety about the destruction of the planet.

So far, the biggest seller from the shortlist is Patricia Lockwood’s Nobody is Talking About This, the only debut novel on the list. Lockwood gained traction as a talent to watch on Twitter, as does the narrator of her novel, much of which consists of loosely connected, jokey chunks of narrative that could work as Tweets before real life, in the shape of a child, intervenes.

Other shortlisted authors were Maggie Shipton for The Great Circle, about a wartime aviatrix planning to circumnavigate the globe via the poles; Nadifa Mohamed’s The Fortune Men, based on the real case of a Somalian sailor in Cardiff wrongly accused of murder in the early ’60s; and Sri Lankan Anuk Arudpragasam’s A Passage North, in which a man travels across the island for the funeral of his grandmother’s former care-giver.

The Booker Prize deliberations and results are often attended by scandals and controversies, to the extent that these are contrived or leaked to ensure that it stays in the news. There were no such eruptions this year, although there was some critical chagrin that Nobel-winner Kazuo Ishiguro’s Klara and the Sun was longlisted but did not make the final cull. Rachel Cusk’s Second Place and Francis Spufford’s Light Perpetual also had their disappointed advocates.