Home » Lifestyle » I laugh at the problematic plots, but romcoms are my lockdown lifeline I laugh at the problematic plots, but romcoms are my lockdown lifeline 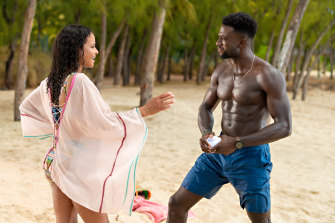 Christina Milian as Erica Wilson and Sinqua Walls as Caleb King in ‘Resort to Love’ .Credit:Netflix

Over the past year, streaming services have whisked out a clutch of ‘destination romcoms’ — snack-sized movies about highly attractive women who fly to idyllic locations (usually a remote tropical island) for professional reasons, but then find themselves falling in love with a plain, unassuming Men’s Health-model look-alike and subsequently achieve complete lifestyle fulfilment.

Single or not, there is no fantasy quite like the fantasy of the fun, island romance with a ravishingly good-looking spunk.

These films, with their cutesy, pun-filled titles (Resort to Love, Falling Inn Love, Romance on the Menu) fire up magisterial levels of sentimentality. 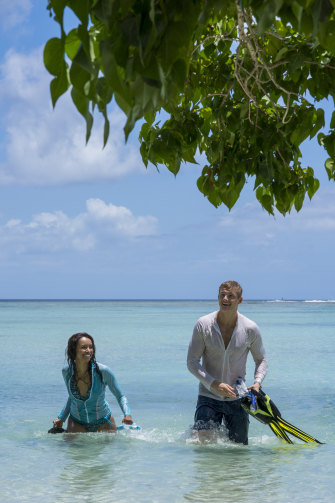 As we remain severed from our usual lives, drawing closer to a state of catatonic oblivion, they let us indulge in the joy of vicarious travel.

In Resort to Love, Erica, an ambitious musician, travels to Mauritius to take up a job as a singer at a luxury holiday resort after her engagement falls apart.

She discovers her ex has moved on, and is getting married at the venue where she was hired to sing. Cue awkward bump-ins and a string of comic tension scattered between long drone shots of the blinding blue sea and white sand — a lot of sand. The island of Mauritius has never looked so inviting.

Watching this film can feel like sitting through a commercial for the island. Any island, really. In fact, you can replace the shots of its sweeping palm trees and crystal water with, say, Guam.

Which is where our heroine in Operation Christmas Drop, oddly also called Erica, is forced to fly when her boss (who is simply referred to as “Congresswoman” and bears an uncanny resemblance to Hillary Clinton) asks her to close a military base because she needs to run “an efficient administration”. (When a woman says ‘efficient’, why is she made to sound unpalatable?) 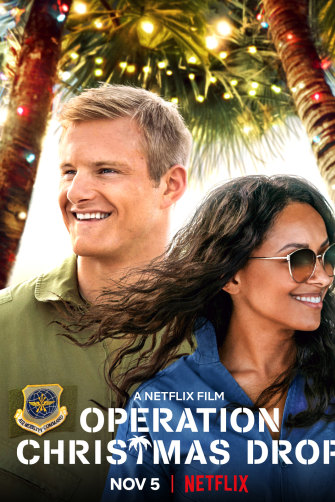 Perhaps the 2020 movie was funded by the Republican Party as a PR campaign for the US occupation of the tiny Micronesia island; the male lead is an American Marine, a cargo pilot with “mad people skills” who is not comfortable taking orders from women.

The male lead is an American Marine, a cargo pilot with “mad people skills”, who is not comfortable taking orders from women.

The story plays on the same tropes as Resort to Love, where strong, competent women are encouraged to ‘relax’ by likeable, charming men whose interests extend as far as maintaining their impeccably sculptured bodies.

In fact, taking pleasure in anything else, like reading, is actually rather pathetic, according to Chip Finley — the male lead in This Little Love of Mine.

Chip’s idea of fun is fishing, snorkelling and horseback riding — pursuits he enforces on our heroine (this time it’s Laura) because she has become too driven and work-orientated.

Laura is a lawyer who has returned to her seaside hometown on an unidentified island to get Chip to sign a contract and thus become partner at her San Francisco law firm. 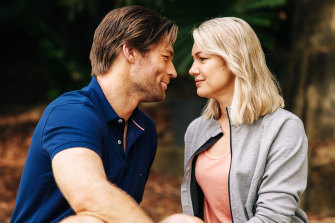 Law of attraction: lawyer Laura (Saskia Hampele) is out to convince Chip (Liam McIntyre) to sign a contract in ‘This Little Love of Mine’.

The phone that is permanently attached to her palm is an ugly thing, and it’s Chip’s mission to ‘soften her edges’ because clearly a woman this driven is much too abrasive for these type of men.

Filmed at Palm Cover, this one could also be mistaken for a Tourism Australia ad— cut to montage of two fit white bodies circling sparkling coral reefs over a breezy summer pop song. 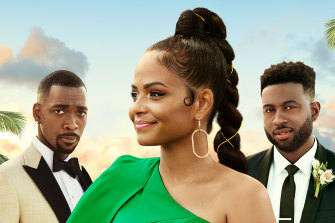 ‘Resort to Love’: strong, competent women are encouraged to ‘relax’ by likeable men whose interests extend as far as maintaining their impeccably sculptured bodies.

Our heroine this time is Caroline , a passionate restaurant owner and chef who is forced to return to her childhood seaside town in Queensland to close her great-aunt’s fish-and-chips cafe.

But love intercepts her plans. By which I mean, an Aussie larrikin (who also helpfully takes our heroine foraging ) softens her hard determination — because here determination is always seen as an unsavoury trait for a woman. Eventually, he acquires her love and devotion through a perfect blend of boyish chivalry and salt-of-the-earth machismo. 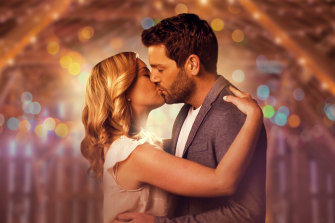 It seems that a woman can’t do her job or practice any sort of professional power without a man trying to get her into bed!

But the omnipresent male desire is indomitable.

Falling Inn Love does not take place on a sea-side playground, but rather the agrarian, rustic plains of remote New Zealand.

Here, Gabriela, a designer from San Francisco, played by the same actress who stars in Resort to Love, Christina Milian wins an old hotel and decides to fly to NZ, despite her lack of knowledge of carpentry, to restore it. She has also just by dumped by her commitment-phobe of a boyfriend. 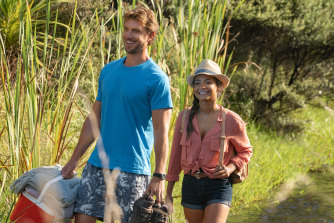 Enter Jake Taylor, a plastic-toy of a human man with a tool-belt attached to his waist like an extra limb. Somehow, he also finds the chance to get shirtless (these men are really proud of their ripped abs) and our heroine simply cannot resist.

Milian is perhaps the most skilful of all these female leads — she has personality, and wit and diligently gives us more than a handful of staple expressions.

All these women are city gals plucked out of their usual environments, and all of them have to try really, really hard to bat off men who want to date them. 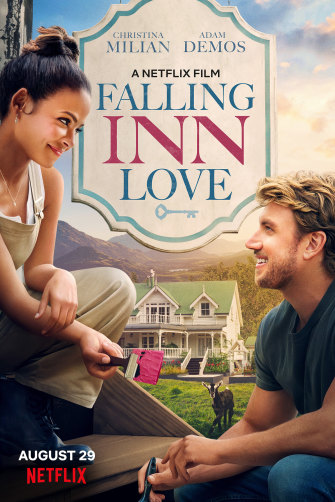 Enter Jake Taylor, a plastic-toy of a human man with a tool-belt attached to his waist like an extra limb.

Yes, these films lack no shortage of problematic principles, but I would be the first to defend them with absolute loyalty.

Romcoms are a lifeline for me. They are a place for me to dream and feel good — to live through someone else’s body, and to imagine a life where I am loved for who I am.

Because the heroines, despite their quirky flaws and roiled clumsiness, are always, eventually, loved for who they are.

These stories alleviate the wound of feeling ineligible for love, annihilating any sense that I might ever find myself in the agonised state of loneliness. They insulate me from the cruel realities of the world, where love is often difficult to acquire if you are not white, or able-bodied, or straight, or neurologically typical.

Watching them is a hall-pass for fairytales as an adult: the names of the places too are so childlike: The Bellbird Valley Farm, Sapphire Cove, Lemon Myrtle Cove — I’m reminded of domestic fantasies such as The Boxcar Children, The Famous Five, The Little House books or The Secret Garden. There is a nationless, frictionless comfort to all these tales.

The situational fantasy of a woman on a tropical island finding love is the same dream as the one I had when I was a little girl, wishing I could walk through the streets of suburban Sydney alone past midnight. It’s a good, easy dream. But it is also kind of impossible.

Impossibility can be a fantasy though, as these romcoms prove. Until the world changes, we can live through them. For women especially, feeling the effects of the pandemic disproportionately, dreaming is more important than ever.

The shows mentioned are available on Netflix. Jessie Tu is the award-winning author of A Lonely Girl is a Dangerous Thing.

'Criminal Minds': Fans Weigh in on the 'Least Likely BAU Lunch Pair': 'I Always Thought That Elle and Garcia Would Not Go to Lunch Together'

Its Okay Academy: You Can Nominate Simon Rex for Best Actor for Red Rocket
Recent Posts