How Morrison was torn apart by Macron’s Napoleonic zeal

Malcolm Turnbull’s bromance with Emmanuel Macron bloomed in 2017, after the G20 in Germany. When the summit ended the French President gave Malcolm and Lucy Turnbull a lift from Hamburg to Paris in his Falcon jet. That night they dined together at the Elysée Palace.

No doubt much of the evening was spent discussing the then $50 billion dollar contract the French had won to build 12 submarines for Australia. But the conversation wandered widely, and, at one point, Turnbull noted that Macron looked a lot like a young Napoleon. 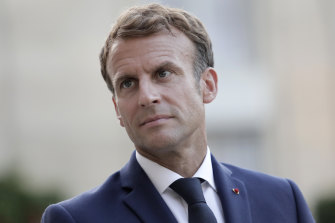 French President Emmanuel Macron has an ambitious global agenda for his nation.Credit:AP

To buttress this observation Turnbull grabbed his ever-present smartphone and showed Macron a portrait of a youthful Bonaparte. Macron looked at it and remarked, “don’t tell Theresa [May] and Angela [Merkel]”.

We know the President is a fan of the emperor because, in a speech to commemorate 200 years since Napoleon’s death, Macron eulogised: “pronouncing his name continues to vibrate a thousand strings of our imagination everywhere”.

It has been a brutal lesson in international politics for Morrison.

One wonders if Macron saw himself walking in the great man’s footsteps when he said: “Napoleon’s life is above all an ode to political will. To those who believe that destinies are already established … the path of the son of Ajaccio, who became master of Europe, clearly shows that a man can change the course of history.”

So, it would have surprised neither the then British prime minister nor the German chancellor to hear that the young Frenchman had large ambitions.

One very close to his heart is to forge a European army. The other, to leverage his nation’s colonial footprint in New Caledonia and French Polynesia to deal France into the great game of the 21st century; the strategic struggle for the Indo-Pacific.

So, to appreciate the intensity of Macron’s fury at the depth charge dropped on the submarine contract this must be understood; it is a blow to his pride and his Napoleonic ambitions. Add to that the conviction that French military secrets have been gifted to Australia and US weapons contractors, and this is a humiliation he won’t get over, ever.

Emmanuel Macron and his wife Brigitte Macron stand by the tomb of Napoleon Bonaparte during a ceremony to commemorate the 200th anniversary of Napoleon’s death in May.Credit:AP

But it is also an opportunity. Macron seized the embarrassment of Joe Biden to leverage the American President’s support for his pet project.

Macron wants European strategic autonomy which, he believes, demands a “true European army”. The US has resisted this push because it doesn’t want to create a parallel structure to NATO, as much as it might complain that the Europeans don’t pull their weight in the alliance.

Given the history, it’s not surprising that some in the American administration suspect a French-led Europe – less dependent on the United States military – might drift from its orbit and into that of its new strategic rival, China. Macron’s plan may well be to try and cut a middle path and that won’t suit America either. 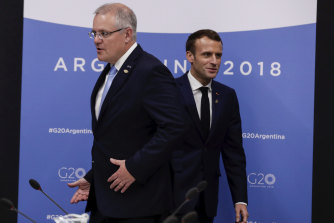 Scott Morrison and Emmanuel Macron have some bridge-building to do.Credit:Alex Ellinghausen

But Macron’s ferocity is yielding results.

After Biden’s first attempt at a rapprochement with France, the two presidents issued a joint statement that spoke of more US military and intelligence support for French operations in Africa and new ways to co-operate in the Indo-Pacific. And this: “The United States also recognises the importance of a stronger and more capable European defence…”

So, the American President has taken the first step down the path of delivering Macron his army. It is another reason why there is little incentive for Macron to lift his boot from the Australian Prime Minister’s throat.

It has been a brutal lesson in international politics for Morrison.

A conspiracy theorist could make an excellent case that there was clear and deadly purpose even in the timing of Macron’s ice-breaking phone call. It came just before Morrison was due to board his flight to Rome (delaying his take-off) and seemed designed to frustrate the Prime Minister’s plans and underline the perils ahead.

The French readout of the call was posted before the PM’s plane landed to refuel in Darwin. The reporters onboard piled off to file the first story of the trip about the conflict, which framed every step thereafter.

The showdown between Macron and Morrison was set, the only mystery is why the Prime Minister seemed so unprepared for what transpired. The most damaging comments came from Biden, whose declaration that the deal was “clumsy” and “graceless” stoked the story and left Morrison looking isolated.

If France could deliver a submarine as potent as the political strike its President launched on the Australian Prime Minister, then this nation has pulled the wrong rein opting to go nuclear. Alas, it can’t. Morrison made the right call, but his dismount from the deal has been about as successful as a winter retreat from Moscow.

Score These Hunter Rain Booties on Sale Before They Sell Out — Up to 25% Off!