High drama when Nic and Keith went to the opera

Usually there’s more than enough drama at a night at the opera – what with all the dying and the singing and the histrionics on stage. But things really stepped up a notch or eleven at The Merry Widow at the Opera House last month.

No, the show wasn’t especially dramatic, and no, no one actually died. Instead it was a battle over theatre etiquette that caused the calamity – which would be rather boring if it weren’t for who was involved – and highlighted the broader problem opera faces.

Australia’s favourite couple, Keith Urban and Nicole Kidman, are mad keen opera fans it seems and so they slipped into a Sydney performance of the three-act Merry Widow extravaganza with Kidman’s mum Janelle. From all reports they thoroughly enjoyed themselves. 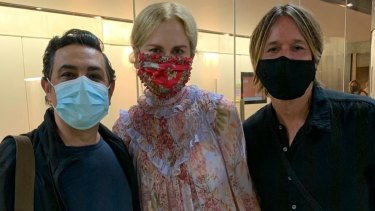 Opera singer Virgilio Marino (left) with Nicole Kidman and Keith Urban after a performance of The Merry WidowCredit:Lyndon Terracini

So much so, that our Keith leapt to his feet for a good old-fashioned standing O at the end of the show. Nicole quickly followed suit and most of the audience joined them eventually … except a gentleman sitting behind the famous couple.

Spies in the audience that night told PS that this particular opera lover took umbrage at the fact the Kidman-Urbans were on their feet and had some words with them. Keith explained they were giving a standing ovation, a sign of appreciation for the show, and carried on clapping and standing.

At this point, allegedly, the gentleman swatted Academy award-winning Kidman with his program, prompting Urban to accuse the man of assaulting his wife. Quick as a flash, Urban summoned his burly security to escort the couple and Kidman’s mum out of the audience, while Opera House security were sent in to retrieve the aggrieved opera lover.

Kidman was apparently visibly upset by the incident and the Opera House heavies must have been too because someone called the police.

“Police have been told a 53-year-old man and a 67-year-old man were both attending the entertainment centre when an argument broke out. Officers spoke to both men and no further action was taken,” NSW Police said in a statement.

After the drama subsided, Opera Australia boss Lyndon Terracini escorted the Kidman-Urbans through back of house and out the relative safety of stage door where they graciously posed for a photograph with the show’s star Virgilio Marino despite the ordeal they had just been through. PS reached out to reps for Kidman and Urban to make sure they are ok, but heard nothing back. 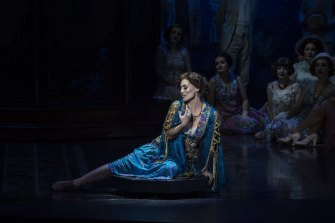 The drama at the opera should be strictly reserved for the stage.Credit:Steven Siewert

Now this whole thing is a rollicking yarn, one of my favourites I have ever been told. But more seriously it raises the important question of what is and isn’t appropriate etiquette when one is watching a 116-year-old piece of theatre inside Sydney’s most famous building.

Back in the olden days standing ovations at the opera were considered a big no-no. It was the height of rudeness to stand up and potentially block your fellow patron’s view of the performers’ bows. Loud clapping, shouting bravo (for the men) and brava (for the women), and even loudly stamping your feet were all ok as long as your butt remained connected to the seat.

But social norms have evolved. In 2021 standing ovations are not only totally acceptable but encouraged. The performers love to see all those masked faces move five-to-six feet up as audiences show appreciation for the three hour performing odyssey they’ve enjoyed.

Swatting people with your program is neither acceptable nor encouraged regardless of whether the person on the receiving end has won an Oscar or not. Kidman might have been upset at the time but she is a big girl and has been on the receiving end of some terrible reviews so it is quite likely she will move past this incident and make her way to the opera again (the upcoming John Bell production of Tosca is wonderful and she should take her mum if she is free).

Imagine it was someone’s first time at the Opera House and they had to endure the embarrassing ordeal of being chastised by a curmudgeonly old bloke desperately grasping on to antiquated opera etiquette in an attempt to keep the art form reserved for the elite.

I once rocked up at the opera in jeans and sneakers and the looks of disgust on some of the well-heeled fuddy duddies could have separated the threads in my trousers. The fact I love opera, was the youngest person in the building by a good 30 years and would leave and tell all my other young friends about it was totally lost on them. They will all soon be dead and if young people don’t go to the opera we may need to start calling that building the Alan Jones School of Conservative Thinking because there won’t be much to put in it.

If Opera Australia is to survive and thrive it needs to encourage new audiences to see its productions. It lures newbies in by staging hokey populist operas and musicals. Despite copping criticism for this strategy, it persists because it needs to make money just to stay afloat, let alone recover from the huge financial hit all the performing arts suffered in the pandemic.

Old mate and his program are part of the reason opera patronage is dwindling. As much as Opera Australia needs to keep up with the times, so too does its audience.

Find out the next TV shows, streaming series and movies to add to your must-sees. Sign up to get it every Thursday.

'The Parent Trap': These 2 Unexpected Co-Stars Are Real-Life Best Friends — And They Once Gushed About Late Co-Star Natasha Richardson
Recent Posts