Having feared the worst, my special needs parenting journey has taken unexpected turns

After my son Arlo was born, I started scratching out a journal to share all the korma-coloured-poo-stained truths about the first year of parenthood. But something happened in that year. Something I did not expect (while I was expecting). Arlo was diagnosed with a disability.

In the weeks that followed, my partner Rowan and I staggered through various states of stunned disbelief, blind denial and wretched devastation. Raising a child with a disability was unthinkable. To believe it would unleash an ominous, stinging swarm of unknowns that smothered any ideas I had about our future. 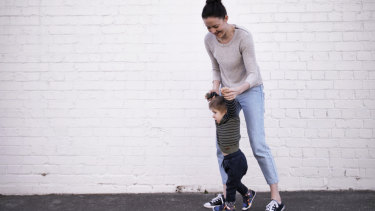 ‘Even if our circumstances are radically different, their emotional outcomes – from pain through to joy – are the same.Credit:Eamon Dimmitt

The only way I could possibly survive (or so I thought) was to be absolutely clear on what that future would hold. I needed to be locked-in, swallow-the-key certain that this nightmare wouldn't (because surely, it couldn't) actually transpire. I needed something, or someone, to tell me with all-knowing sincerity that everything would be okay. Because that's what I'd been telling myself since Arlo had entered the world. Everything would be okay. And I was wrong.

It was four days past his due date, which wasn't such a bad thing, considering he was supposed to arrive on February 29 (prompting the nickname Leap Year Larry).

His fetal movements seemed to have lessened, however. So to hospital we went, where I was prepped to be induced the following day.

That next morning, just as my waters were about to be broken, his heart rate suddenly dropped. It virtually disappeared. And while the midwife scrambled about my belly with a stethoscope trying to find it, the emergency button was pushed, doctors flooded the room, and in an instant my pubes were being skilfully shaved at speed as I was whisked down a corridor to theatre.

Arlo was born by emergency caesarean section in 10 minutes flat, but that wasn't fast enough to stop his brain from being damaged. "We'll have to wait and see what this means," said the specialists.

"Everything will be okay," we told ourselves for six months, right up until Arlo was diagnosed with cerebral palsy. Quadriplegic cerebral palsy. This wasn't okay. This was a disaster that would destroy the rest of our lives. Or would it?

With Arlo's early intervention in the hands of highly capable specialists, this left a considerable amount of brain space in which to wallow at not being given what I felt entitled to: your stock-standard, unremarkable, "everything looks normal here" baby.

Typically developing kids, through their inherent ordinariness, are everywhere. There's no avoiding them. Even if you never leave your own house, there they are, bright blue eyes staring out from the formula tin, nappy packet and baby Panadol box, making painful pangs of comparison a daily – if not hourly – reality.

Whoever invented baby milestone cards has a lot to answer for. As if it wasn't painful enough to watch as our child fell behind his pint-sized contemporaries, some sod had gone and made physical signposts, intended to flank typically developing, linen-clad specimens, saying: "Today I said ma-ma for the first time", "I can sit up, yippee!" and "I just took my first steps!" Suffice to say, most milestone cards aren't made with us in mind (although I have spotted one that says "Send gin"). But we hardly needed a social-media trend to tell us our kid wasn't meeting the mainstream marks.

Many parents raising typical alongside not-so-typical children told me that the latter were the more pleasant of the bunch, and I only needed to glance around any cafe – Arlo sitting adorably on my lap as other parents necked scalding coffees while their two-year-olds screamed and smeared avocado smash on strangers – to see what they meant.

"Allow yourself grace to have your situation," one mother told me. "I felt like I had a baby for longer and I could enjoy that. In any phase of life, in any situation, there are pros and cons, so just try to pull yourself closer to those pros." Take your breaks wherever you can get them, eh?

There's a bounty of unpleasant children around to highlight the benefits of yours (just as I write this, in a public library, a ruddy-faced toddler has spat over the railing of the upper level, narrowly missing my head). And before we move on from those by-the-bookers, let's take a moment to consider the ones who might be living under your own roof.

Just before Arlo turned two, we had another baby, a daughter, Odette. She's typical (apparently), and on more than one occasion I've caught myself marvelling at how much easier she is to handle – with her nimble little body, and vomits-to-date I can count on one hand – then thinking, "How much breezier would life have been if we didn't have a child with a disability?"

I hate myself for having this thought. I hate the guilt I feel for having it, I hate the way it makes me look at Arlo, and I hate how it makes me feel like I'm playing favourites with my children. "But it's only a thought," says my therapist. "Who hasn't wondered, 'What if my life had been different?'"

From speaking to parents with children at various points on the disability severity spectrum, it's clear that comparison, that sly chameleon, takes many forms. No child comes without challenge. And even if our circumstances are radically different, their emotional outcomes – from pain through to joy – are the same.

Parents in milder camps are often frustrated that people don't acknowledge, or even believe, that their child has a disability. Funding can be harder to come by, as can a clear-cut diagnosis. They also seem to take longer to come to terms with their child's disability. Perhaps acceptance is harder the closer you are to the cookie-cutter model. When "normal" is just out of reach, it would be tempting to keep grasping.

Some parents revealed that they felt awkward around others whose children were more severely affected. 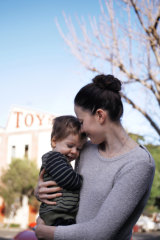 "I felt a little guilty when Finley started talking, because we have a lot of little non-verbal friends," said Christina Smallwood of the Fifi+Mo blog, which offers support to parents of children with cerebral palsy. She and her adopted daughter, Finley, who has mild cerebral palsy, are almost superstars among the special-needs set. "It's important to be mindful of everyone," she added, "but it's also okay to be proud and celebrate your child's milestones." Or "inchstones", as they are often referred.

Debby Elnatan, a special-needs parent and inventor of The Upsee – a fantastic device that straps your kid to your waist and feet so they can stroll around – has spent years researching what she calls "broken child syndrome".

"Some parents don't look at their kid's face," she told me. "They see their arm, their leg, whatever isn't working, and they want to fix this kid. Meanwhile they've stolen their childhood. They've neglected themselves and the siblings."

Elnatan's son Rotem has cerebral palsy and at the time I talked to her over Skype from her study in Jerusalem, I was completely obsessed with the idea of Arlo walking. He just had to walk. I couldn't possibly imagine a future in which he didn't.

"If you have to spend this much energy to get this much progress," said Elnatan, spreading her hands wide and then shrinking them in close, "and meanwhile their childhood is getting screwed up, is it worth it?"

She told me studies have shown that among adults living with a disability, mobility is not at the top of their list of priorities. "It's social. It's communication. Okay, so they won't walk, they'll be in a wheelchair, but are they going to be happy and communicate, or are they going to be apathetic and unhappy?

"People are so hung up on walking. It's a trap that everybody falls into – the broken child syndrome – and I don't think you can avoid it. The question is, how do you ever catch yourself and get out of it?"

Some parents clambered out by reflecting on how unfair it is to think of their kid as faulty. "How would you feel if your spouse, or your loved one, or your brother or your sister, was looking at you and always wanting you to be somebody different?" said one mother. Others suggested that, rather than wondering, "When will Arlo walk?" I should think, "What can I do to help him reach his potential?"

I'll leave you with that thought and throw in a dose of perspective. This milestone comparing thing? You'd be doing it anyway, even if your tot was typical.

In her memoir Blue Sky July, Nia Wyn, whose son has cerebral palsy, observed: "As we pass the running children who hold up their heads so easily, I realise miracles are so commonplace we barely recognise them any more, and near the circles of mothers anxiously comparing milestones at the school gates, I see how we live in a time where normal is never enough, and we are never full."

This article appears in Sunday Life magazine within the Sun-Herald and the Sunday Age on sale September 15.