He was ambushed in retaliation for one of his first ever arrests for the department, investigators say.

A Georgia police officer has been shot dead on his first day on the job.

Dylan Harrison, 26, was killed in an ambush on Saturday in retaliation for making one of his first ever arrests for Alamo PD, investigators say.

On Friday afternoon, Officer Harrison observed a traffic violation in the parking lot of a Circle K convenience store right across the street from Alamo Police Department.

After he attempted to perform a traffic stop, the driver refused to identify himself or hand over his ID, and pushed Harrison, 13WMAZ reported. The driver continued to resist arrest until Harrison deployed his taser, subduing and arresting him before taking him to jail.

But just hours later, in the early hours of Saturday morning, Harrison was gunned down outside the police department. Investigators say the suspect — 43-year-old Damien Anthony Ferguson — is an known associate of the man Harrison arrested.

“It is believed that the ambush-style attack on Officer Harrison was retaliation for the incident and arrest of the man,” Georgia Bureau of Investigation said in a statement.

After a large-scale manhunt involving a state SWAT team and the U.S. Marshals Service, Ferguson was tracked down in Wheeler County on Sunday afternoon, and taken into custody without incident. 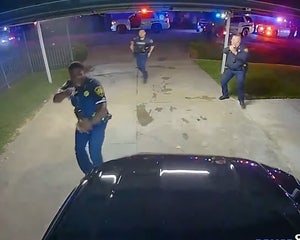 Insane Ring Footage Shows Suspect Drive Through House, Run Over Deputy as Police Shoot Each Other in Crossfire

He was charged with murder; he was also charged with aggravated stalking related to a previous domestic incident.

“I have never experienced a grief that I have felt since Officer Dylan Harrison’s life was taken in our small, quiet town,” Alamo Police Chief Karen Zanders said. “His life was taken from him for simply doing his job.”

Harrison had previously served in law enforcement in Georgia and Oklahoma, and had worked as a firefighter and paramedic; but Friday was his first day working for Alamo PD.

He is survived by his wife, and their six-month-old son. A GoFundMe for the young family has already raised more than $40k.

Scream's Ghostface wields a dagger in poster for fifth installment