Home » Lifestyle » Fans of The Crown won’t like Diana biopic Spencer, but reviewers lapped it up Fans of The Crown won’t like Diana biopic Spencer, but reviewers lapped it up

It is 24 years since the car crash in a Parisian tunnel that killed Princess Diana, but the lonely princess locked in her succession of castles has lost none of her power to fascinate us.

“There are some people who are endowed with an undeniable, penetrating energy,” says Kristen Stewart, who portrays her in the new film Spencer by Chilean director Pablo Larrain. 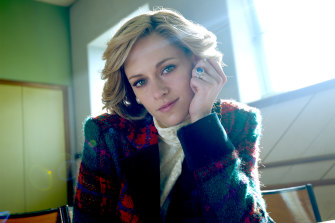 “I look at pictures of her, even a fleeting video clip, and I feel like the ground shakes. Someone so desperate for connection, able to make other people feel so good while feeling so bad inside, so generous – we haven’t had very many of those people throughout history.”

Spencer, which is the hottest ticket at this year’s Venice Film Festival, gives an imaginative account of Christmas celebrations at Sandringham House in 1991. It is a private three-day event, but as circumscribed by traditions and protocols as a coronation or investiture ceremony; there is a sense in which every cup of tea sipped at the correct hour or Scotch egg consumed at a scheduled picnic is helping to uphold the Crown and thus the security of its grateful subjects.

Diana is close to shattering under the pressure of this constant pretence. Her only reliable escape hatch is the bathroom, where she throws up one banquet after another. Meanwhile, her bedroom curtains are sewn up on her husband’s orders: the paparazzi are undoubtedly circling the estate and might spot the princess in her underwear. She leaves, taking her sons with her, in the middle of the annual Boxing Day pheasant shoot.

Stewart had her own share of press intrusion while starring in the Twilight film franchise but, she says firmly, you can’t compare that to Diana’s experience. 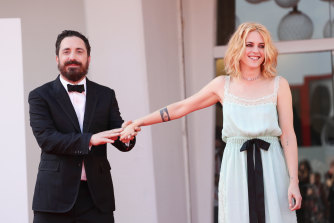 Pablo Larrain and Kristen Stewart at the Venice Film Festival premiere of Spencer on Friday.Credit:Getty Images

“She was the most famous, most photographed woman in the entire world. And I have tasted a high level of that but, really, nowhere near that monumental, symbolic representation of an entire country. I don’t think anyone can understand what that felt like – and we tried.” As an actor, she is also allowed to make mistakes in a way princesses may not. “I don’t consider my job as lofty. If I did, I would also be puking backstage.”

Larrain says he wanted to make a film that might appeal to his mother, who found such inspiration in the Princess of Wales that she tried to emulate her hair and clothing styles. “Diana was of course a very famous, beautiful icon on many levels,” he says. “She was a mother as well – and, more importantly, created something incredibly beautiful, a level of empathy.” But she was also unknowable. “And that mystery, combined with the magnetism she had, creates the perfect elements of a movie.”

Like Larrain’s first English-language film, Jackie, which featured Natalie Portman as the former US first lady, Spencer will likely cleave opinion down the middle. Fans of The Crown likely won’t be happy with its lack of attention to juicy detail, its flights of Gothic fancy – which include Diana eating her own pearls and having visitations from the ghost of Ann Boleyn – and Larrain’s evidently cursory interest in the Windsors. Most of the family members are merely seen around the dinner table; they don’t even rate speaking parts.

There will also be a rump of opinion still aghast at the very idea of K-Stew trying to become the People’s Princess. And it is true that while Stewart is hauntingly harried and hounded and her accent trained as carefully as a climbing English rose, she never seems bred for this station in life in the way Diana did. But this is a fable; Stewart is not aiming for impersonation. “If I were to try to do my perfect Princess Diana impression,” she says, “you would start to lose the life that was so overwhelming in her personality.”

As it turned out, reviewers in Venice were almost universally ecstatic about both her performance and Larrain’s revolutionary take on the biopic. Five stars from The Guardian, a verdict of “masterly” from Variety, a tribute to Stewart as “incandescent” in the Hollywood Reporter. “What thrillingly gutsy, seductive, uninhibited filmmaking this is!” exclaimed the London Daily Telegraph’s critic.

One exception was The Times, which described it as an “infuriating mixed bag, one that veers wildly from moments of dreamy intrigue to risible scenes of camp”. But that could be seen to be the point.

“Entirely to its credit, Spencer is nothing like real history, and its Diana can certainly not be proven to be anything like the real Diana, whoever that poor woman was,” wrote Jessica Kiang definitively in Playlist. “All the right people are going to hate Spencer. That’s just how good it is.”