Home » Lifestyle » Fact Check: Has the budget turned around by $100b and did the Coalition have a pre-COVID debt problem? Fact Check: Has the budget turned around by $100b and did the Coalition have a pre-COVID debt problem?

FACT CHECK 1: “In the last 12 months, the budget has turned around by over $100 billion. That is the single biggest turnaround in a budget in 70 years. And the reason for that is we’ve got people into work, off welfare and into work.” Prime Minister Scott Morrison, leaders’ debate, April 20.

Morrison says his government’s economic management is responsible for bringing the budget back under control after the pandemic.

An “apples and apples” comparison?

A fundamental problem with Morrison’s claim is that he has conflated two different four-year periods. The forward estimates in last year’s budget covered the four years from 2021-22 to 2024-25.

Over this period, budget deficits were expected to total $342.4 billion, including a large pandemic-induced $106.6 billion deficit for 2021-22.

On the face of it, this does represent an improvement of “more than $100 billion”. The trouble is, the biggest deficit year – 2021-22 – has dropped out of the latest budget period.

Put another way, a big part of the improvement referred to by Morrison happened simply because of the end of the pandemic.

Beyond this, what role is lower unemployment expected to play? 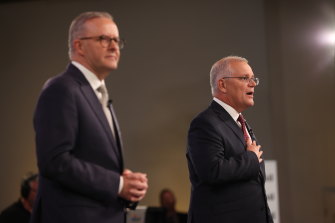 Now, Treasury is predicting an unemployment rate of just 4 per cent for the current 2021-22 financial year, and then 3.75 per cent for the three years after that. This is good news for the bottom line.

But is it the main reason for the improvement, as Morrison suggested?

In short, no. We need to dig into the budget papers more deeply and compare the same four-year budget periods, from 2021-22 to 2024-25, to get an “apples to apples” comparison.

First, let’s look at the spending side of the ledger. A year ago, the government predicted it would fork out a total of $2433 billion over the forward estimates. In the latest budget, the estimate jumped by $144.2 billion to $2577.2 billion.

New policy announcements over the past 12 months alone added $51 billion.

A bigger part of the explanation for the improvement in the budget is found on the tax revenue side of the ledger. In last year’s budget, Treasury was expecting to rake in $2080.9 billion in tax over the four years from 2021-22.

As Treasury notes, a big part of the story was iron prices and an increase in company tax revenue, particularly for the next two financial years.

The budget position has certainly improved. But it is wrong to suggest this has been overwhelmingly due to government efforts to push down the unemployment rate.

For a start, the government has compared two different budget periods, only one of which includes the pandemic-affected 2021-22 financial year.

Spending has, in fact, increased dramatically. While this has been slightly offset by lower outlays on unemployment benefits, a far bigger part of the story is soaring revenue.

FACT CHECK 2: “It’s important to remember that they [the Coalition] had already doubled the debt before the pandemic had hit.” Labor leader Anthony Albanese.

Labor has been working hard to defuse the argument that the Coalition is a better economic manager by highlighting the Morrison government’s record on debt.

During the leaders’ debate on Wednesday night, Albanese challenged the notion that the debt build-up could be blamed on the pandemic, arguing debt doubled under the Coalition before the pandemic struck.

Albanese did not specify whether he was talking about net debt – which accounts for offsetting financial assets – or gross debt.

The level of gross debt represents the total consequences of successive budget deficits.

When the Coalition came to power in September 2013, gross debt (mostly in the form of Treasury bonds) was about $280.3 billion, according to data published by the Australian Office of Financial Management.

This had been accumulated over a number of years, mostly in the aftermath of the global financial crisis, which plunged the budget deep into deficit as the then Rudd government increased stimulus spending.

By the time the pandemic hit, around January 2020, gross debt was about $568.1 billion. This was, as Albanese said, about double the level of gross debt prevailing when the Coalition was elected.

This is not particular surprising, given the government ran budget deficits equivalent to an annual average of 2.2 per cent of GDP between 2008-09 and 2018-19.

However, as noted above, the gross figures are not the only way to measure debt. A more meaningful “real” measure, reflecting the government’s ability to handle its borrowing, is net debt expressed as a proportion of economy (or gross domestic product).

On this measure, government borrowing has also risen sharply, although it hasn’t doubled.

According to the federal budget papers, by June 2014, about nine months after Tony Abbott won the 2013 election, the ratio of net debt to GDP was 13.1 per cent.

Albanese can justifiably argue that debt doubled under the Coalition even before the pandemic struck. This is, however, a nominal figure, failing to reflect the idea that the economy expanded and inflation increased over the period in question.

A more meaningful “real” measure, the debt to GDP ratio, shows debt increased, but by considerably less than the amount suggested by Albanese during the leaders’ debate.