Extinction rebellion teen will drop her education to save the planet

Extinction Rebellion member, 16, who organised nationwide school strikes says she’s willing to get arrested to save the planet – but viewers slam the group as ‘brainwashed fools’

A teenager who organised nationwide school strikes on behalf of protest group Extinction Rebellion has admitted she is willing to sacrifice her education and get arrested to ‘save the planet’.

Dani, 16, from south London, was featured in the BBC 3 documentary Extinction Rebellion: Last Chance to Save the Planet, last night. She said she had never been on a protest before joining the group in 2018, but is now spearheading regular school strikes all over the world.

In April this year, Oxford Circus and other central London locations ground to a halt as they were occupied by young people demanding action to save the planet.

New BBC3 documentary Extinction Rebellion: Last Chance To Save The World? looked at how the climate change protest group has mobilised a generation to take radical action.

And many who tuned in to the show took to social media to express their shock at the protesters and their actions.

‘They are giving air time to these brainwashed lunatics who protest about a non-existent problem. They don’t quote any science and refuse to debate with any serious,’ wrote one, while another dubbed them ‘brainwashed fools.’ 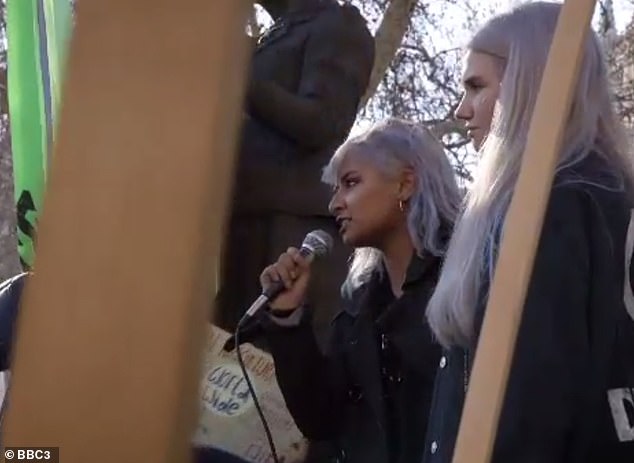 Dani, 16, from south London, had never been on a protest before joining the group in 2018, but is now spearheading regular school strikes all over the world 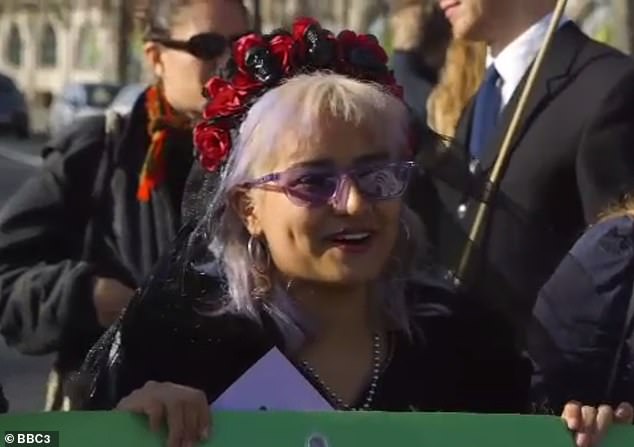 Many viewers were left in shock at the protesters, with one saying:L ‘I fail to be impressed by the school holiday shenanigans’

‘I’ve tried to have actual intellectual conversations with some extinction rebellion protesters and it’s honestly like bashing my head against a brick wall,’ a second commented. ‘Can’t stand people who think only their opinion is correct and nobody else’s matters.’

Another penned: ‘It’s so easy and safe to protest in this country that I fail to be impressed by the #ExtinctionRebellion school holiday shenanigans,’ while a fourth added:

‘Watching #ExtinctionRebellion programme and scary stuff like an end of the world cult…..grooming kids and potentially ruining their lives with criminal convictions.’

For four months, reporter Ben Zand followed some of Extinction Rebellion’s key younger members as they worked towards ‘the rebellion’ in April, which ended up lasting for 11 days.

Despite it being a ‘peaceful’ occupation of four iconic locations around the capital, including Oxford Circus, Trafalgar Square and Waterloo Bridge, more than 1,000 people were arrested.

Many of the young people involved were not only protesting for the first time in their lives, but also put their liberty on the line to demand radical action from the government.

Dani co-organised the nationwide school strike in February and admitted she would be willing to get arrested – and drop her studies – for the cause.

Twitter was flooded with reaction following the documentary. ‘Watching Extinction Rebellion programme – scary stuff like an end of the world cult,’ wrote one

‘If it came to the point where, if I really had to, for a period of time, drop my education, for this…I probably would,’ she said.

‘I would definitely feel like, maybe not completely drop it but just give it a stop.’

Ben meets with Dani prior to this year’s school strikes. During a video call to check in with fellow activists, one claims saving the planet is ‘more important than missing a day of school’.

But while many doubted the actions of the protesters, others declared they were ‘inspired’ by them.

‘Great doc, truly inspiring how Extinction Rebellion has given us permission to address the doubts have been harbouring in our hearts for too long ,’ penned one. ‘We know we have to change we know there isn’t much time . Thanks XR.’

A second commented:  ‘Brilliant! That’s how you create awareness.’

Another Extinction Rebellion member Ben meets is recent graduate Sam, 22, who is one of the several hundred people who work full-time for the group. 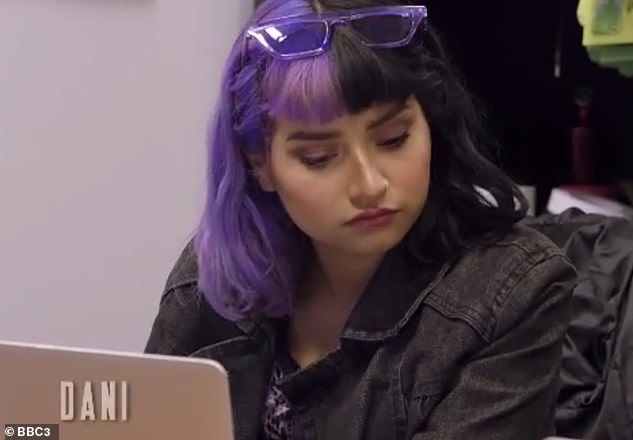 Some viewers praised the protesters and their believes, with one saying: ‘Great doc, truly inspiring’

Ben joined him during a planning meeting for his first ever active rebellion, where the aim is to shut down International Petroleum Week – specifically, a conference taking place in a London hotel.

During the protest, during which they glued themselves to the doors of the hotel, one woman told a frustrated security guard: ‘Do you really think we want to spend the door glued to a door? We’re doing it because we care about our planet.’

When the police arrived, Sam was arrested for aggravated trespass and criminal damage.

He spent 16 hours in a cell and admitted it began to send him slightly ‘mad’. He’s currently awaiting trial. 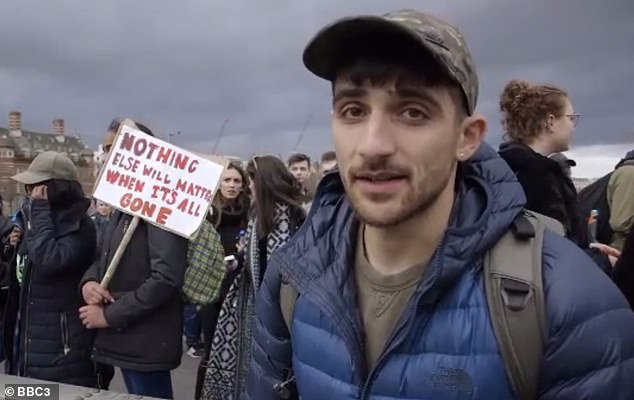 For four months, reporter Ben Zand followed some of Extinction Rebellion’s key younger members as they worked towards ‘the rebellion’ in April, which ended up lasting for 11 days

But Sam admitted he is willing to get arrested again and again until something changes.

When Ben challenged the fact that a lot of people involved in the rebellion are ‘young and impressionable’ and an arrest could carry long-term consequences, Sam argued that Ben is underestimating their intelligence.

‘They’re incredibly educated about the crisis,’ he said. ‘They’ve had to educate themselves because the systems in which they exist, don’t. But the energy and the education that they bring to this movement is totally and utterly invaluable.’

He added: ‘One of the strengths of this movement is that we do it every single day, and that’s how it’s going to be until something changes.’

Ben accompanied Sam as he and a group of young activists, including 11-year-old Raffi, try to deliver a letter to Claire Perry, Minister of State at the Department for Business, Energy and Industrial Strategy.

‘Climate change is a huge threat to the world, bigger than the World Wars – it’s kind of our World War III,’ Raffi told the reporter. 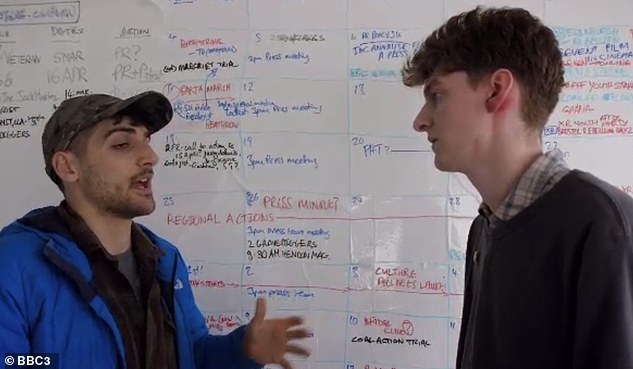 Another Extinction Rebellion member Ben meets is recent graduate Sam, 22, right, who is one of the several hundred people who work full-time for the group 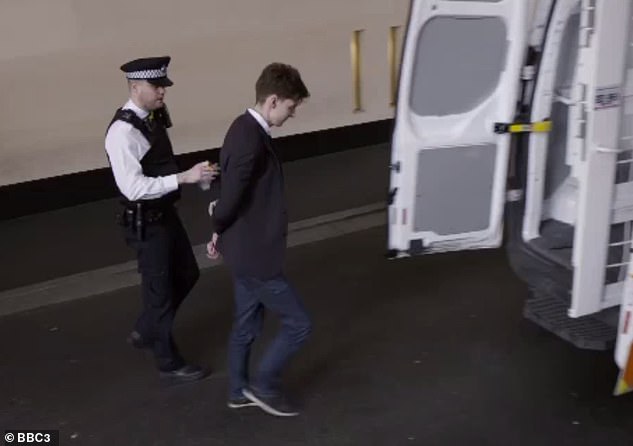 When the police arrived at a protest Sam was staging to try to shut down International Petroleum Week, he was arrested for aggravated trespass and criminal damage.

But when they arrived they were refused entry – until a security guard eventually agreed to take the letter after the children threatened a sit-in protest outside.

Another member who featured prominently in the documentary is 18-year-old Jack, who recently joined the movement.

He was inspired by the tactics and research laid out by Extinction Rebellion, and was behind the protest which brought Trafalgar Square to a stand-still.

He is keen to help organise controversial splinter actions for the movement – and is more than willing to be arrested for the cause.

In one scene he recounted the scenes at Trafalgar Square, where scores of children occupied the roundabout, bringing traffic to a standstill.

Speaking to Roger Hallam, the leader of the movement, Jack said: ‘I was like, “Hmm, let’s just block the roundabout”.

‘Then we blocked every single entrance to the roundabout and just gridlocked it, it was sick.’

Impressed, Roger told him: ‘What we really need is people like you to basically say to all the young people, it’s not a matter of milling around, what’s going to get us into a room with the government is, you go to these roads, you sit down, you eat your sandwiches all day and have a nice time but you’re basically in the road all day.’ 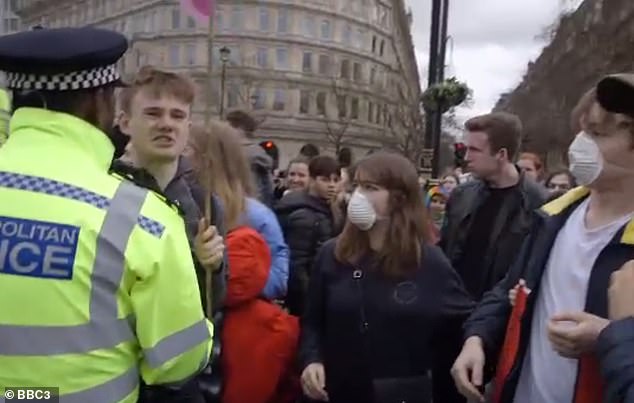 Another member who featured prominantly in the documentary is 18-year-old Jack, who recently joined the movement (pictured right next to the police officer) 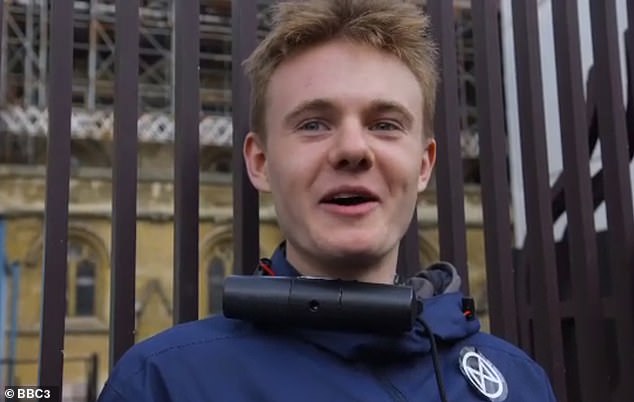 Excited Jack then told Roger he was going to do ‘no revision’ the week of the rebellion and quipped: ‘See you in prison,’ as he left the room.

Roger, who has spent years academically researching tactics for social change, claimed you need 2,000 people to get arrested and 400 people to go to prison if you want the government to meet your demands.

‘Extinction Rebellion is a democratic organisation and it believes in democratic processes in society,’ he said.

‘Our role is to create the disruption to persuade the government and the nation that the next generation is going to die unless we make these radical changes.’ 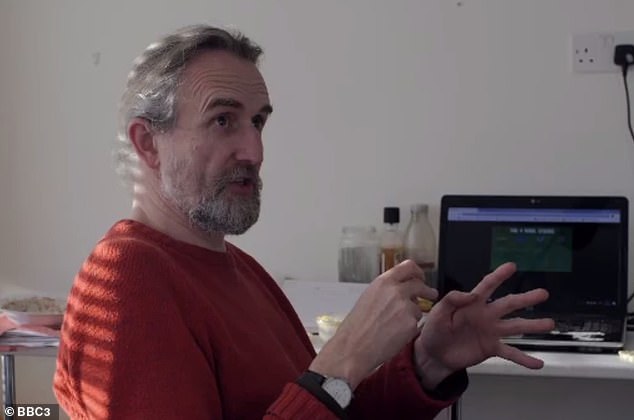 Extinction Rebellion leader Roger Hallam, who has spent years academically researching tactics for social change, claimed you need 2,000 people to get arrested and 400 people to go to prison if you want the government to meet your demands 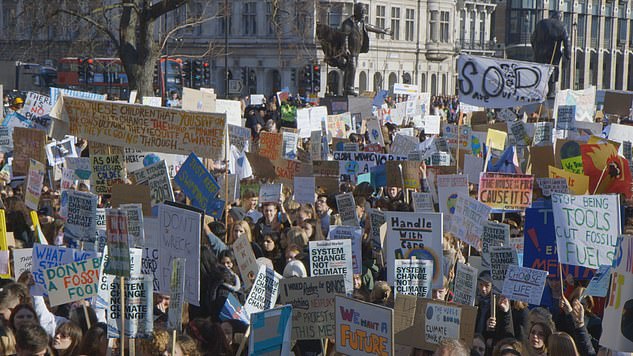 Extinction Rebellion is a ‘democratic organisation and it believes in democratic processes in society’, according to Roger. Pictured – the protest in April in central London

Speaking about the protests in central London, where their aim was to ‘close down the city non-violently’ by sitting in the streets, he said: ‘If 1,000 people do get arrested, then it will be a major political event like it was in the civil rights movement in the 1960s.’

Discussing future plans, he added: ‘We’re not stopping. We’re going into the most dramatic episode in human history. It’s going to be quite a ride.’

Ben challenged him on his methods, asking whether it is ever justifiable to encourage young people to break the law, even for a greater good.

But according to Roger, if they fail, then ‘we die’.

Ben admitted: ‘I just feel like his aims are so unrealistic. He is trying to bring about a change in British society that we haven’t seen in 500 years.’

Extinction Rebellion: Last Chance To Save The World? is available to watch on the BBC iPlayer now.