Outside the old Metro Theatre, a massive billboard shows a young woman floating above a twinkling skyline. Musician Nick Cave, beneath a vivid blue wig, adorns the facade of the Windsor Hotel. 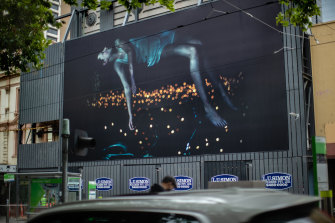 A giant billboard featuring of a girl who seems to float in the sky by Bill Henson is a highlight of the inaugural Uptown festival.Credit:Simon Schluter

These artworks, by photographers Bill Henson and Polly Borland respectively, are two of those installed at the top end of town as part of a new festival called Uptown: An Art Exhibition For Our City. Curated by Robert Buckingham and Fiona Scanlan, the show is designed to draw people back to the city centre and particularly to Melbourne's "Paris-end".

Bars, restaurants, hotels, shops and bookshops might already house art but the festival looks beyond, with vacant shopfronts and laneways transformed into temporary galleries. The festival runs until the end of February and displays the work of 26 artists, including Kent Morris and Destiny Deacon.

Henson, whose untitled image from 2000-01 is on the Metro hoarding on Bourke Street, said he was "like a kid in a sandpit" when it came to exhibiting his work on a large scale.

"The main thing about these exercises broadly is it’s not just about bringing people back into the city or so-called coffee led recovery," Henson said. "I think it’s more about trying to introduce a bit of beauty into a relatively harsh environment."

Henson said he appreciated when art commandeers commercial spaces. "It's not advertising anything, billboards traditionally advertise a product. This is appealing to people’s emotions – without a commercial goal."

Playful connections are made between the venues housing the artworks and the pieces themselves. Borland's portrait of Cave, for example, is surrounded by gold curtains, a nod to the backdrop of her portrait of Queen Elizabeth – of the House of Windsor. (Her Majesty's more subtle shade of blue-rinse may be another connection, albeit not officially.)

Further down Bourke Street, in the window of Mitty's Newsagency, an installation by Peter Atkins celebrates the colour and glamour of 1980s TV personalities and magazines. 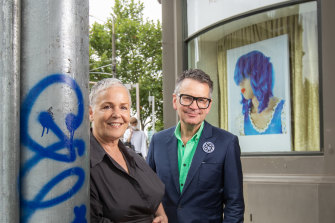 For the first time in fabric store Job Warehouse's 170-year history, artists take over with works by Elizabeth Newman, Janina Green, Susan Cohn and Steve Rhall featured in the windows. Archibald Prize-winner Louise Hearman's paintings at Grossi Florentino and Cellar Bar reference work by colonial artist Eugene von Guerard, whose studio was nearby in the 1850s.

The festival follows an emerging pattern of artwork being taken outside to public spaces in the wake of COVID-19.

Buckingham is chief executive of the Naomi Milgrom Foundation and was head of Melbourne International Fashion Festival for seven years and Scanlan is known for her women's fashion label Scanlan Theodore.

While the pair wanted to do something positive for the city centre, Scanlan said they realised early on that the entire city was too big a canvas. By narrowing their focus to the grand, old part of Melbourne, from Exhibition to Spring streets, they highlight a much-loved area with low-level buildings, beautiful light and an eclectic mix of spaces that "feels like a small village".

"It's very much about Melbourne, re-looking at our city," Scanlan said.

Buckingham said they wanted to highlight the work of visual artists and asked them to consider their relationship to the area. "By the same token, our shared histories in fashion, in design, in retail, really informed how we approached the show."

Underlying the idea of the festival, Buckingham said, was a desire "to get energy back to the street, that was in our plea".

The festival was underwritten by the City of Melbourne with many of those involved offering their services pro bono. In effect the top end of town is transformed into a free, open air gallery, accessible 24 hours a day. Scanlan hopes a wander through the Paris-end will be on people's to-do lists during summer as we all become tourists at home. "You can start to feel the energy generated," she said.

To photographer Bill Henson’s mind, Uptown's goal is a simple one: “People need more beauty in their lives and that’s what they are trying to do.”

Uptown runs until the end of February. See uptownartexhibition.com.au

Keke Palmer to Host and Executive Produce ‘Foodtastic,’ a Cooking Competition Series on Disney Plus
01/27/2021

Dream Team Selector: The most popular selections ahead of Gameweek 1
01/27/2021
Categories
We and our partners use cookies on this site to improve our service, perform analytics, personalize advertising, measure advertising performance, and remember website preferences.Ok