A well-earned break! Emma Raducanu rides a jet-ski and poses in her bikini as the teenage tennis sensation enjoys her first holiday in seven years

Emma Raducanu posed in a bikini and rode a jet-ski across a turquoise sea as she shared snaps from her first holiday in seven years last night.

The tennis star, 18, who lives in Kent, has had a rapid rise to A-list celebrity status following her US Open triumph in September, and has since been invited to represent an array of luxury brands including Dior and Tiffany&Co.

However last night she delighted her Instagram followers by revealing she is currently taking a break in a unknown tropical location, captioning her pictures: ‘Couple flicks from my first holiday in 7 years! Feeling so ready and pumped for pre season.’

In the photos, the teenager can be seen posing in a bikini as she snapped a photograph of a sunset, while in another, she leans against a fence while taking in a tropical beach. 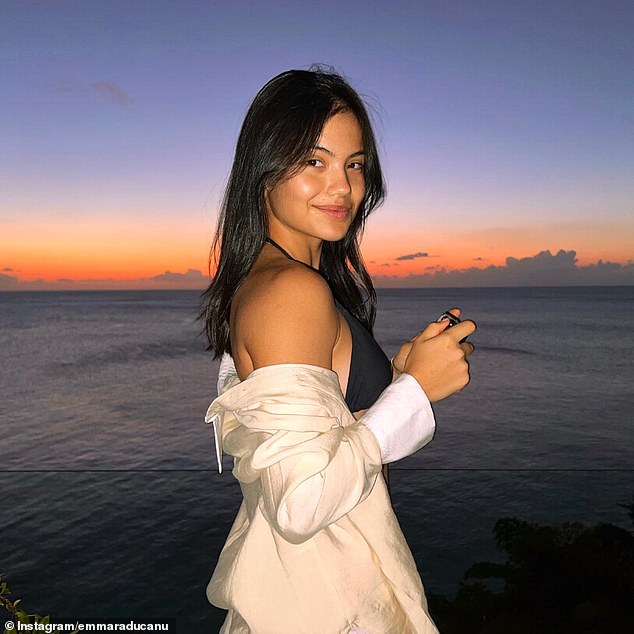 Tennis sensation Emma Raducanu, 18, posed in a bikini and rode a jet-ski across a turquoise sea as she shared snaps from her first holiday in seven years last night 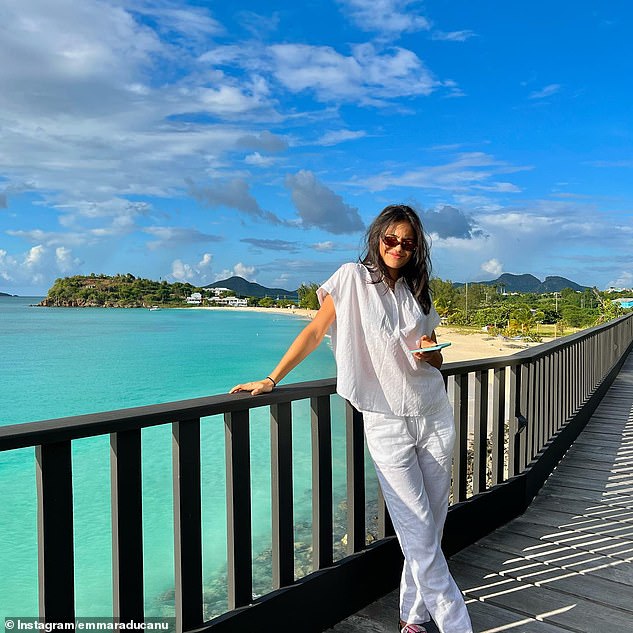 In another holiday snap shared with her 2 million Instagram followers, Emma leans against a fence while taking in a tropical beach

Days ago, Emma shared a 40 second long video as she rode a jet-ski across the turquoise green waters.

She posted: ‘It’s me! Came a novice but am leaving addicted.’

The British teenager produced one of the sporting stories of the year when she navigated the qualifying rounds in New York to storm all the way to the final, where she defeated Canada’s Leylah Fernandez 6-4, 6-3 to win her first Grand Slam title, as well as £1.8million in prize money.

The first British woman in 44 years to win a Grand Slam singles title, she did not drop a set during the tournament. 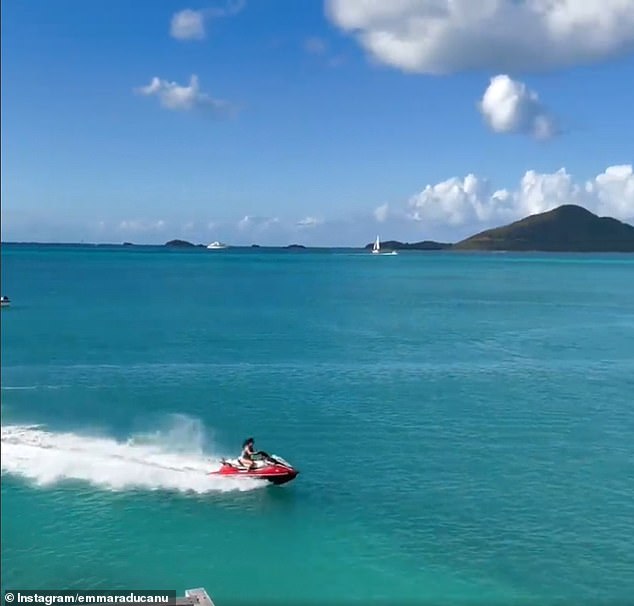 Days ago, she shared a video as she rode across the turquoise waters on a jet-ski, hinting she was ‘addicted’ to the new hobby

Raducanu gained celebrity status with her maiden Grand Slam win at Flushing Meadows, with brands lining up to offer her sponsorship deals and a host of magazines featuring her on the front cover.

Days later she found herself among the A-list elite at New York’s Met Gala – the biggest night in fashion.

She rose to the occasion in a stunning midriff-baring, monochrome Chanel outfit complete with pearls encircling her waist and Tiffany diamonds in her ears.

Personally invited by Vogue chief Dame Anna Wintour, she was seated on the $500,000 Chanel table with its celebrity ambassadors – prompting speculation she would join their ranks as an ambassador.

Meanwhile, the teenager was then revealed as the face of jewellery brand Tiffany and Co in a deal estimated to be worth more than £2million.

Emma announced the title on Instagram, saying: ‘Very excited to join the iconic @tiffanyandco family as a House Ambassador. Being able to wear these special jewellery pieces over the past few weeks has been an honour!’

And in October, she became the latest celebrity to be announced as an ambassador for high-end fashion house Dior.

In the role, the teen will represent Dior Creative Director Maria Grazia Chiuri’s womenswear collections as well as the luxury brand’s skincare and make-up ranges.

It is not known how much Emma will be paid for her role as an ambassador for Dior.

Emma further cemented her place as a household name as she was revealed as she face of Sports Direct’s 2021 Christmas campaign. 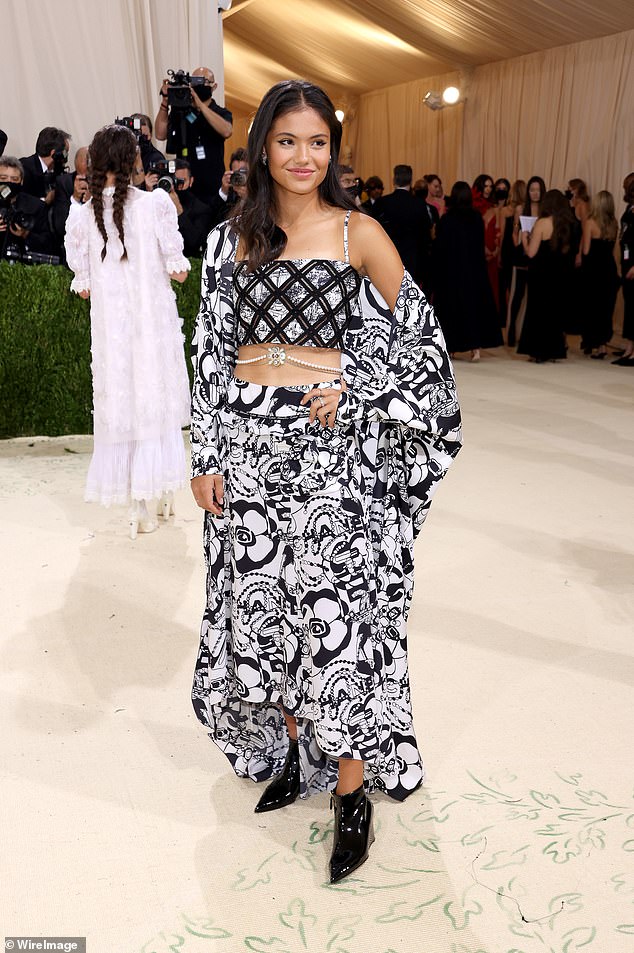 Days after winning her first Grand Slam, she found herself among the A-list elite at New York’s Met Gala – the biggest night in fashion

The teenage tennis sensation was joined by Euros heart throb Jack Grealish and an array of Britain’s top young sporting stars in the advert.

Looking sensation in tennis whites, the 18-year-old from Bromley frolics in the snow, hitting snowballs with her tennis racket in a whopping £6million campaign where she cheekily jokes ‘new balls please’ while being pelted in a snowball fight.

The tennis star has been heralded as a ‘sponsor’s dream’, and is on course to become the highest earning female sports star of all time.

It was also reported that she laid the groundwork for her potential earnings aged 17, registering Harbour 6 Limited to manage her finances. 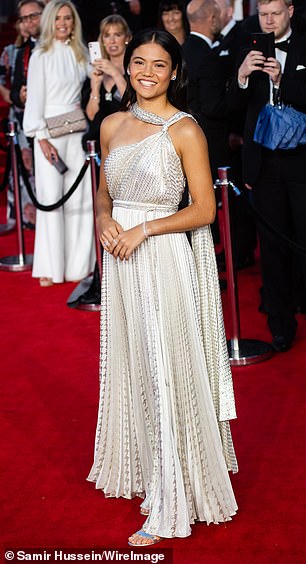 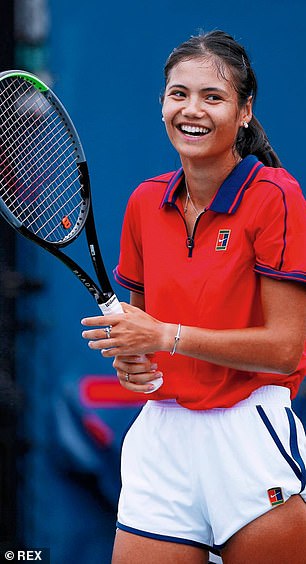 Emma attending the “No Time To Die” World Premiere at Royal Albert Hall on September 28, 2021 in London (left) and right, during practice US Open Championships 2021

The Champion Tennis event, held at the Royal Albert Hall, confirmed the major winner will feature in the weekend this weekend.

Raducanu will take on WTA No 83 Ruse, who she played in practice sessions at last month’s Transylvania Open in Romania.

Raducanu has enjoyed mixed fortunes on the tour since her Grand Slam triumph, losing early at Indian Wells and going out in the quarter-finals in Romania before being beaten in the first round of the Linz Open last week by Wang Xiyu.

The youngster, who has Chinese and Romanian heritage, heads into the Champions Tennis event at London’s Royal Albert under new coach Torben Beltz, having appointed the German last week.