She paired the underboob-baring design — fastened in front with just a tiny metal hook — with jeans, her beloved Nike Air Force 1s and a yellow JW Pei bag ($79).

Since welcoming her first child with husband Sebastian Bear-McClard in March, Ratajkowski has also debuted a gold necklace dedicated to her newborn son. 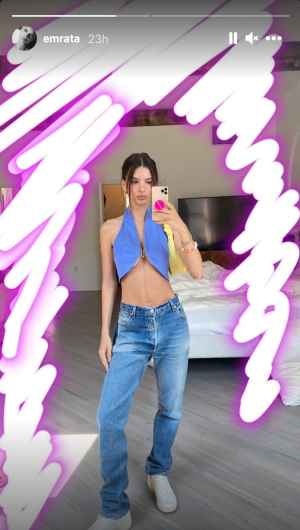 Earlier in the month, the model and Inamorata founder made headlines for twinning with Sylvester in matching mommy-and-me swimsuits.

While her maternity style was equally adventurous – ranging from curve-hugging dresses to cutouts – her post-baby outings have featured a series of skin-baring bra tops.

Last week, she celebrated her birthday wearing a $3,195 Versace “mermaid bra,” just days after hitting the streets of NYC in a $540 denim top by Prada.

And she’s had more to celebrate than turning 30; her first NFT, or non-fungible token, was recently auctioned for $140,000.

The anonymous buyer earned digital ownership of a picture of the star standing in front of one of her old Instagram posts, which artist Richard Prince co-opted for his own series.