Home » Lifestyle » Elton’s back, with a rollcall of names so eclectic it borders on the bizarre Elton’s back, with a rollcall of names so eclectic it borders on the bizarre

I still remember listening to the radio in 1978 and hearing the news that Elton John had won yet another award to add to the trophy room in his mansion. And I distinctly recall that in his speech he said that he felt Elvis Costello deserved the award rather than him. I was flabbergasted. Elton knew who Elvis was? And he thought he should have won? 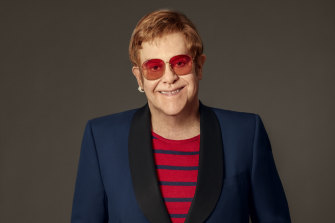 Elton John has collaborated with a long list of singers and producers for new album The Lockdown Sessions. Credit:Gregg Kemp

Not long before this I had acquired Costello’s first two albums on a Friday and decided by Monday that he was God. Soon afterwards I was espousing the virtues of The Jam, The Clash, XTC, Pretenders and The Specials, while hiding my Eagles, Fleetwood Mac, Supertramp, and – yes – Elton John albums up the back of the collection.

Fast forward three decades, and I read that Elton sent an assistant out every Tuesday to buy all the new releases so he could keep current with upcoming artists.

The point is that the good knight has always had a big thirst for what’s new and he’s an enthusiastic booster for younger musicians he admires. So when the world went into lockdown, he decided to reach out to other artists, many of them decades his junior, in order to collaborate.

The resulting album, The Lockdown Sessions, casts Elton as the Zelig of pop, appearing alongside a rollcall of names so eclectic that it borders on the bizarre. What other album this year will feature Lil Nas X, Eddie Vedder, Miley Cyrus, Stevie Nicks and Gorillaz? And Glenn Campbell, who died four years ago?

But, COVID, right? There’s that whole thing about not being allowed in the same room as anyone else. Let’s face it, that’s often how musicians collaborate even in non-pandemic times. And it can be tricky matching the energy and delivery and making it work. Australian trio Pnau mash up Elton’s 1989 song Sacrifice with Dua Lipa performing Rocket Man and lo and behold, it’s a swishy disco-pop hand-waver called Cold Heart. This setting suits the M.O. here, and works on other dance-pop tracks such as the limber Learn to Fly with Texas soul-pop duo Surfaces and the electro-fizz of Orbit with English songwriter/producer SG Lewis.

But, look, we have to talk about autotune. Sure, it’s everywhere in pop music, and has been for some time, but when it makes Elton John sound like he’s singing through a beard of bees or like a synthesised Elton robot, as it does at certain moments here, then Houston, we have a problem. 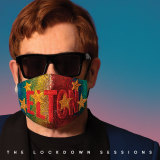 The Lockdown Sessions is available to stream on Apple Music and Spotify. Credit:Interscope Records

Then there are the complete mismatches. Exhibit A: Always Love You, where Elton romantically croons, “I’m uncertain of a lot of things, but with you I’ve always known,” while Young Thug raps, “F—ing me good and I’m hooked like crack”. This remake of The Odd Couple is kind of creepy.

You can consider some of these songs in good news/bad news pairs. There’s the country bracket where one works (Brandi Carlile) and the other doesn’t (Jimmie Allen).

Then there are the two Stevies – there’s a complete disconnect with a drowsy Stevie Nicks on Stolen Car, while Elton and Stevie Wonder sound like they’re dancing through a fountain of youth on the upbeat Finish Line.

Elton John could easily rest on his laurels, retreat to his castle and spend his days casually checking the royalties pouring into his bank account from his vast back catalogue. The fact that he feels the need to keep producing work during a pandemic and at the same time stay connected with other artists is admirable. There are sparks in some of these team-ups, but not enough for The Lockdown Sessions to catch fire.

Erika Girardi Defends Herself During The Real Housewives of Beverly Hills Reunion: I Was Not in Control of My Finances