Self-proclaimed ‘elder goth’, 57, who has PURPLE eyebrows and skull tattoos reveals she learned her make-up skills by watching YouTube tutorials while recovering from breast cancer

Pentagram and skull tattoos, purple eyebrows, dramatic black clothes and an extreme crop are not the typical attire for a highly valued 57-year-old employee of a major part of the justice department.

But Jane Wilkes, 57, from Brighton, a self-proclaimed ‘eldergoth,’ has never set out to be average – laughing when cheeky builders whistle the theme tune to The Addams Family as she passes, and shirking off insults of ‘vampire’ and ‘dead’ from ignorant strangers.

Turning heads wherever she goes, she honed her impressive make-up skills by watching YouTube videos as she recovered from breast cancer in 2017.

Now, she is determined to prove to others that when it comes to expressing yourself, age should not be a factor.

‘To me, an eldergoth is part of a community of people that were there, dressing this way since back in the day,’ said Jane, who has been married to her husband Jonathan for 21 years. 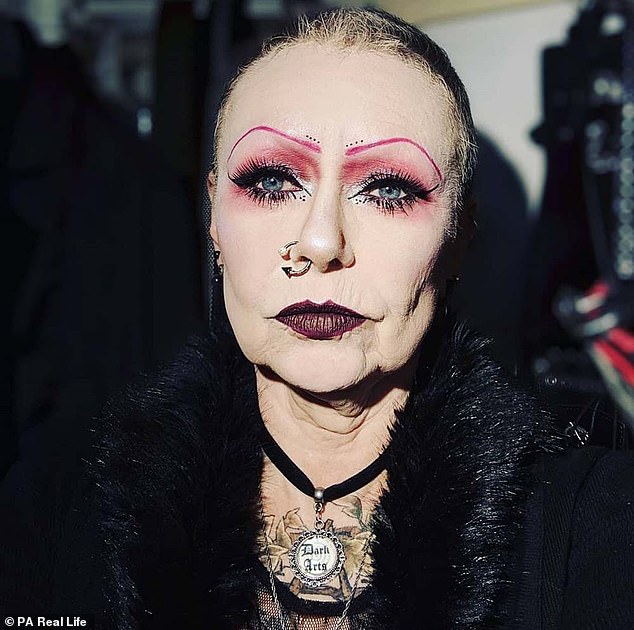 Jane Wilkes, 57, from Brighton, has always been a fan of gothic clothing, but was empowered to embrace her look further after she was diagnosed with breast cancer in 2017 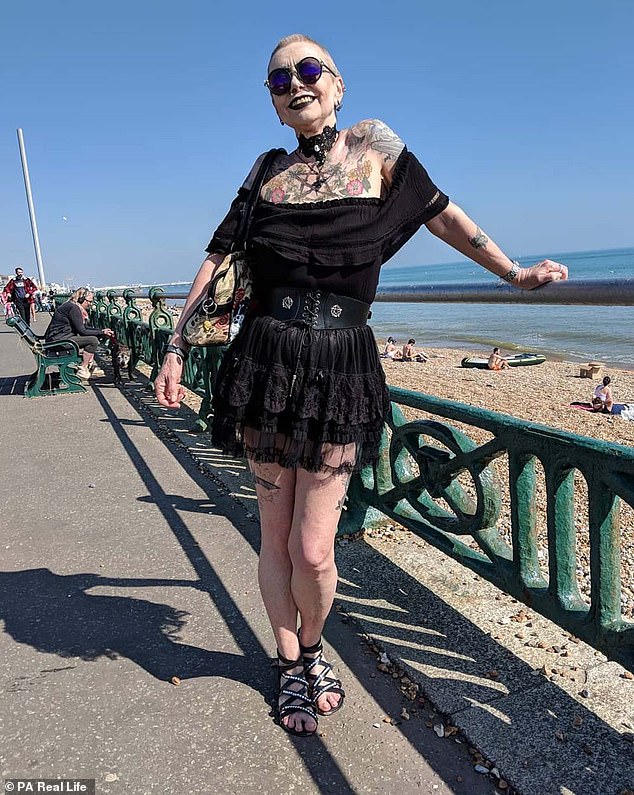 While she used to get a lot of negative reaction, Jane revealed comments are now largely positive as younger people are inspired to be like her when they’re older

‘You get a lot of people saying you can’t be a goth if you don’t wear this brand or that brand, but I think I can be my own goth, and do what I like.’

She continued: ‘Once you get to a certain age, the truth is that you really don’t care what people think, and while I have dealt with lots of abuse over the years, nowadays I get much more of a positive reaction with people telling me they want to be like me when they’re older.’

Growing up, Jane dressed as a punk, adopting a more goth style in the 1980s.

‘I was drawn to how it had this blend of influences – from literature and horror to art and the Victorian era – but with a punk edge,’ she said. 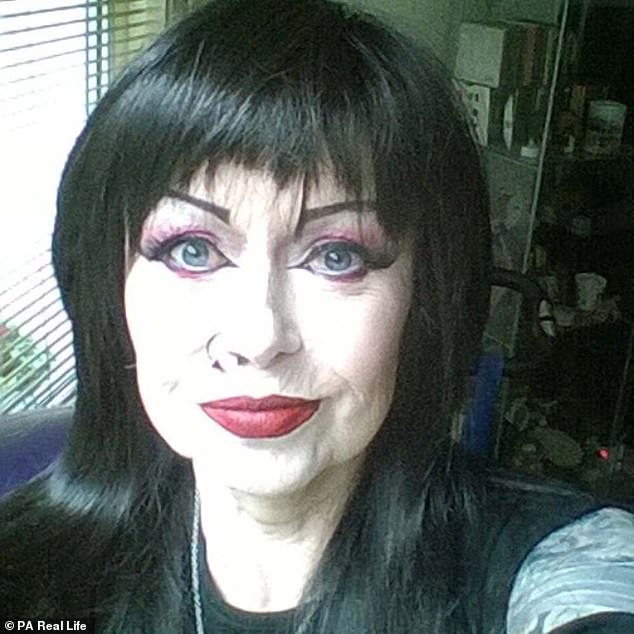 Jane honed her make-up skills after losing all her hair during treatment in 2016 as she battled breast cancer (pictured, during chemotherapy) 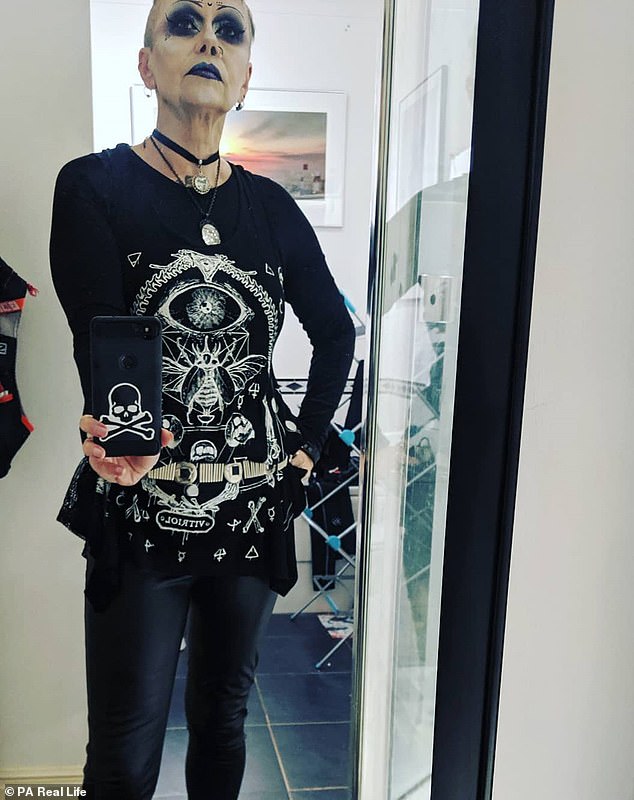 The self proclaimed ‘elder-goth’ (pictured) told how she gets some ‘quite amusing’ abuse in the street, but doesn’t let it phase her 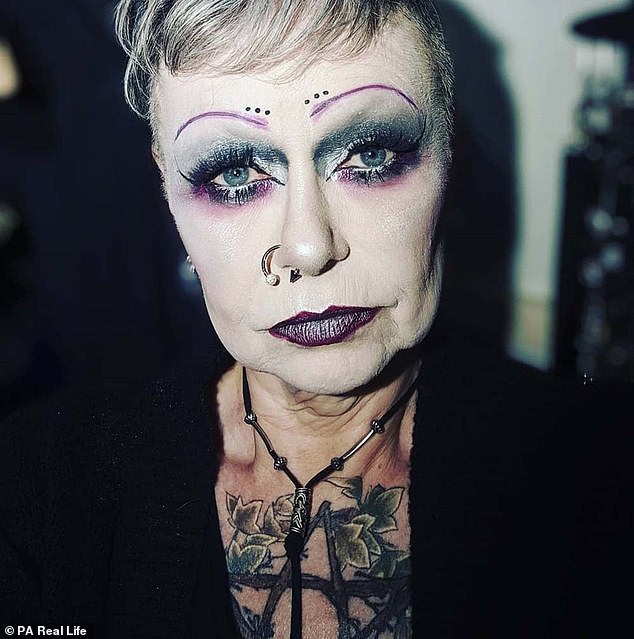 After losing her eyebrows during chemotherapy, Jane now uses her new-found make-up skills to make them bright and colourful (pictured)

‘You get all these Victorian-style pieces and intricate jewellery, then add in punky fishnets and PVC.’

Over the years, Jane began adding to her look with a range of tattoos – all of which have a personal meaning to her – getting her first in her 30s.

‘With tattoos, you get people saying, “Think what that’ll look like when you’re older.” But I’m already older, so I don’t have to worry!’ she explained.

‘My look has certainly never got in the way of my career either. I’ve been told lace cat ears are inappropriate for work, but that’s about as far as it’s gone.’

Currently, Jane has a huge sun design tattooed on her back to mark being given the all-clear from cancer, a pentagram on her chest, symbolising both the magic of nature and the memory of a friend who passed away, and a flower also on her chest – made up of local wild flora.

And she has a bat on one thigh, a cat sat on a skull on the other and a bumblebee – with her estimating the entire gallery to have cost her thousands of pounds and taken 10 whole days to complete. 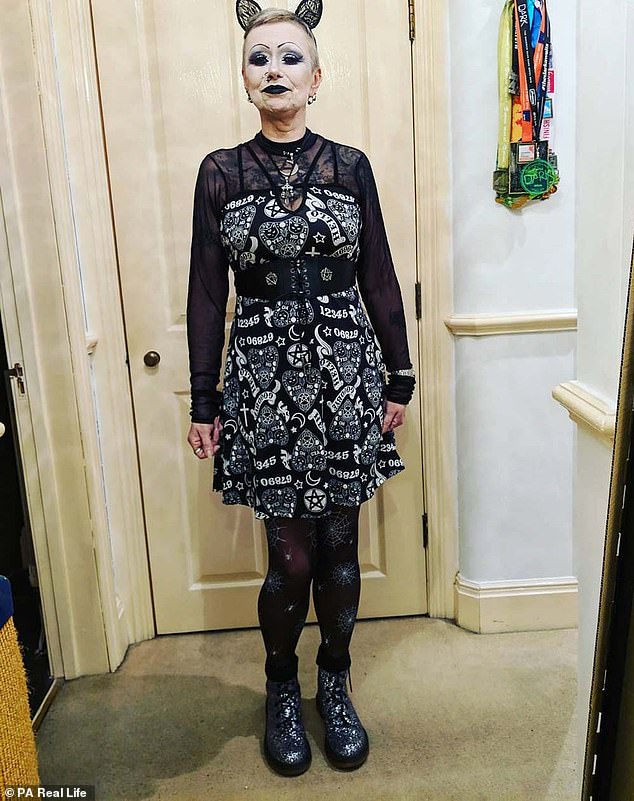 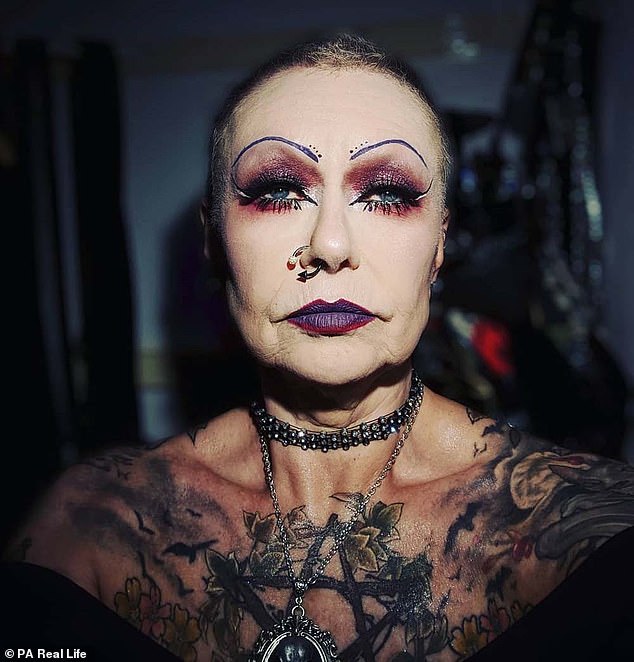 ‘It’s all the things that make me glad to be alive,’ she said. ‘I especially love nature, and animals.’

Jane’s breast cancer diagnosis came as a complete shock, detected in 2016 by a routine mammogram, despite the fact she had been feeling absolutely fine.

Six weeks later, she had surgery to remove part of her right breast, as well as some lymph nodes, followed by chemotherapy and radiotherapy.

‘It came as such a shock,’ she explained. ‘I’d been feeling absolutely fine. All my treatment happened in 2017, followed by a hip replacement after that, which, in a way, was a lot to deal with at once, but at the same time, at least I could handle it all in one go rather than spacing everything out.

‘I’d always been a really keen runner and tried to keep it up as best I could. But there were days during chemotherapy that I was absolutely exhausted – and that’s when I learnt about YouTube.’ 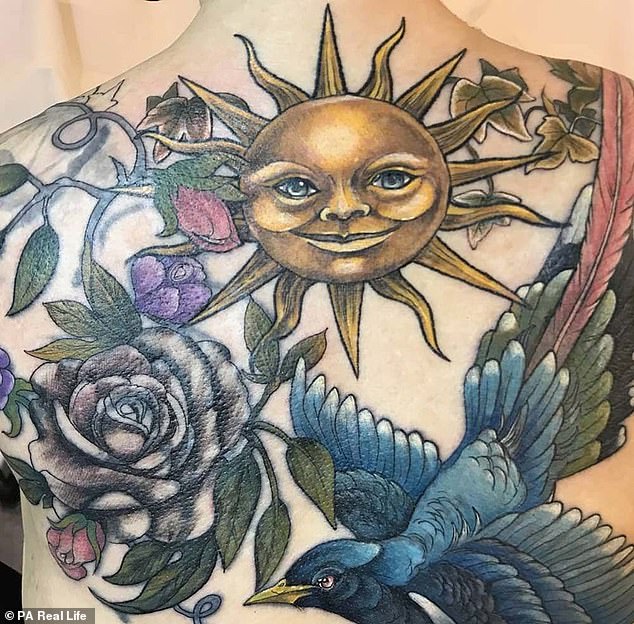 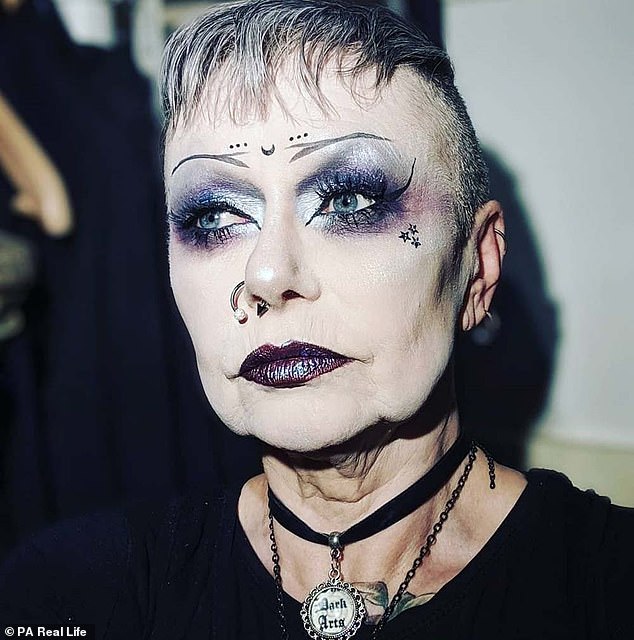 Despite always wearing dramatic makeup, Jane learned how to ‘contour, highlight and blend’ while recovering from chemotherapy (pictured after the application)

After losing her eyebrows during chemotherapy, Jane used her new-found make-up skills to make them bright and colourful.

‘They’re usually purple, but I’ve had them pink and blue too,’ she said. ‘When I lost my hair, my husband Jonathan decided to do something amazing and go and scatter it up on the South Downs – some beautiful hills in Sussex I’d often run on.’

‘That way, birds could use it to make nests and when I started running up there again, as I felt better, I’d hear the birds tweeting and know they’d grown up in my hair.

She added: ‘I’ve no idea how Jonathan came up with that idea, but it was one of the most romantic things I’d ever heard.’ 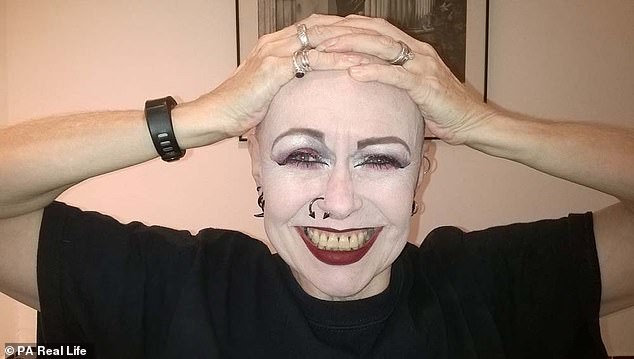 Jane, pictured after she lost her hair, said her diagnosis was a complete shock. She had surgery to remove part of her right breast, as well as some lymph nodes, followed by chemotherapy and radiotherapy 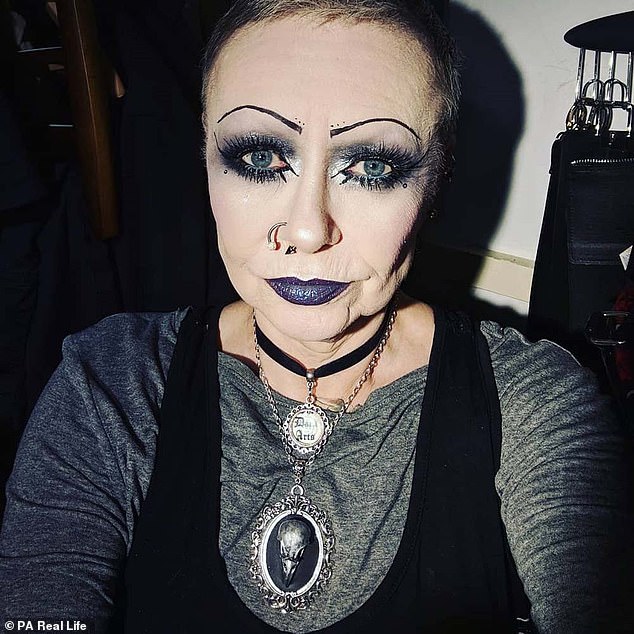 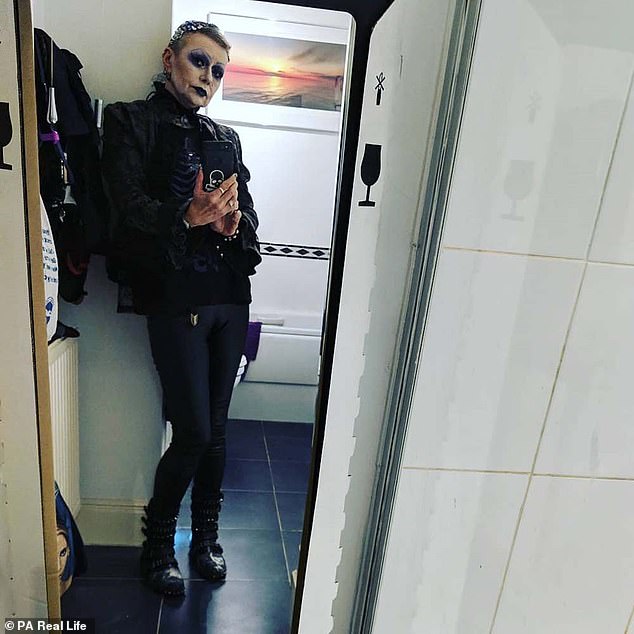 Jane revealed she gets the odd nasty comment, but generally reaction is positive, and people often approach her about her look

‘With my hair, I have decided to keep it short. It started to grow back curly, and I don’t think I’ve ever seen a curly-haired goth in my life.’

These days, it takes Jane around an hour to do make her face up each day – longer if she is going somewhere special – and she finds most of her clothes in charity shops, customising them herself to give them goth twists.

She can still find herself the target of the odd nasty comment, but mostly people are very positive.

‘I’ll get shouted at, called a vampire or dead,’ she explained. ‘I think there are stereotypes and misconceptions about what sort of people goths are.’

‘Many people see us as vulnerable, and think that they have a free pass to be nasty to anybody that looks different – that they can insult us and just get away with it.

She added: ‘I just try not to react when I get abuse, and remind myself that the people shouting can’t have anything particularly special about themselves.

‘Saying that, I have had what I call quite amusing abuse. Once, I walked past a group of builders and they started to whistle the theme tune to The Addams Family, which I found hilarious.’ 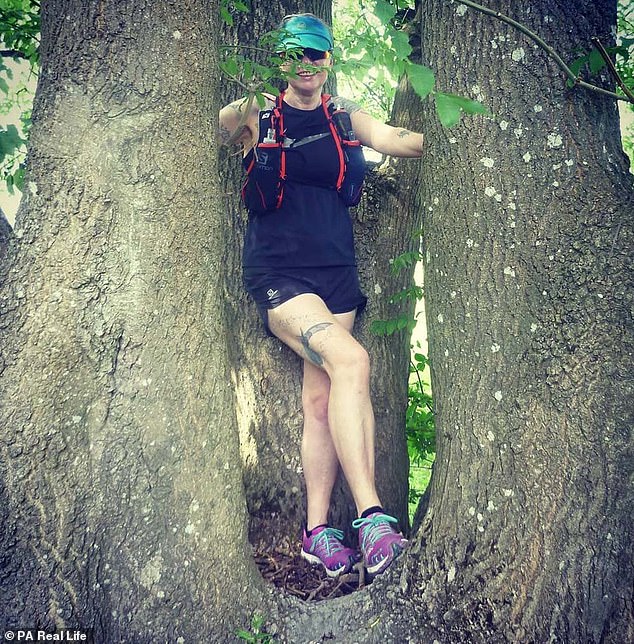 The eldergoth has always been a keen runner, and was determined to keep fit while she was in treatment for the disease. Pictured, Jane in her running gear 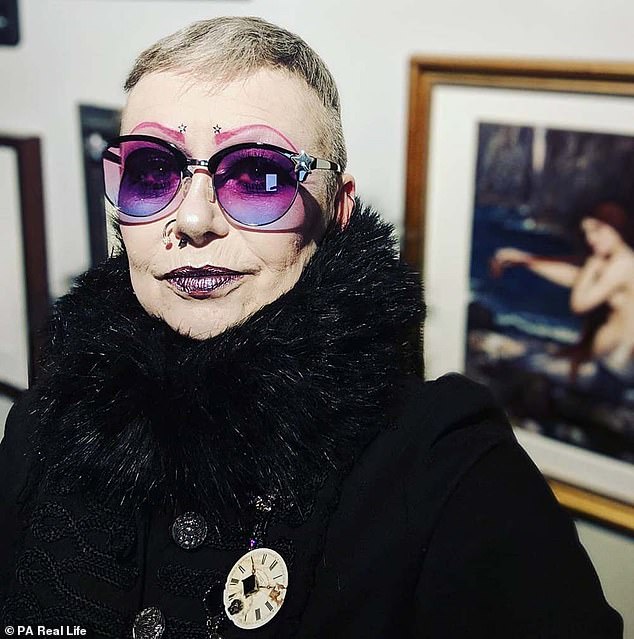 Jane honed her make up skills while watching YouTube videos during her cancer treatment. It now takes her an hour to get ready every day

Now, Jane has set up an Instagram, where she shares snaps of her latest outfits and make-up looks.

And she has received an outpouring of support, with many fans flocking to like her photos and leave positive comments.

‘I get a lot of the younger goths following me, which I think is great,’ she said. ‘I hope I can, in a way, be a mentor to them.’

‘People stop me so much in the street these days to talk about my look that I’ve even had little cards made up, so they know where to find me on social media if they want to see more.

She added: ‘Life, to me is about helping people and influencing them to be more positive. You have to be who you are.’

‘It’s really important to take care of yourself and your body, and keep it healthy – but by all means, paint, decorate and pierce it too.’ 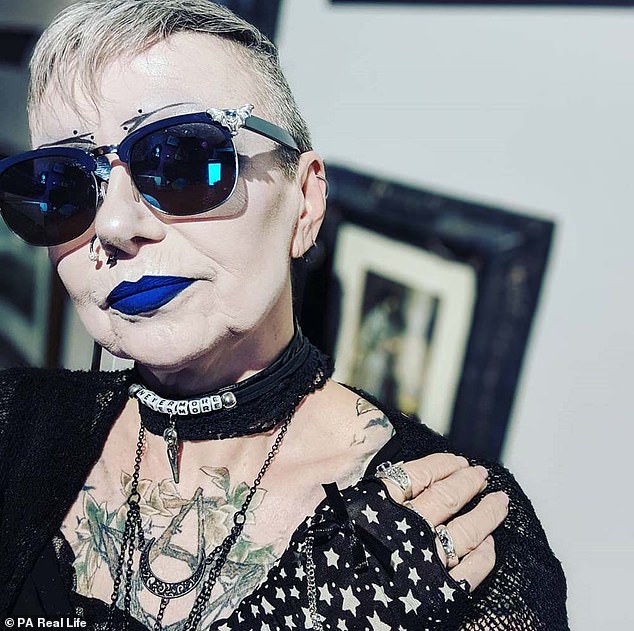 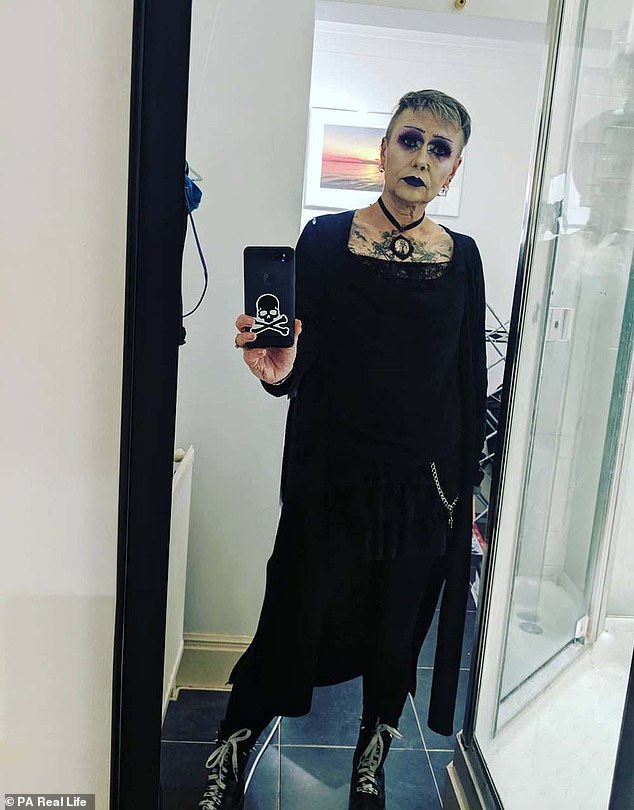 Rather than worrying about abuse in the street, Jane tries to laugh it off and calls it ‘amusing.’ Pictured in one of her everyday outfits 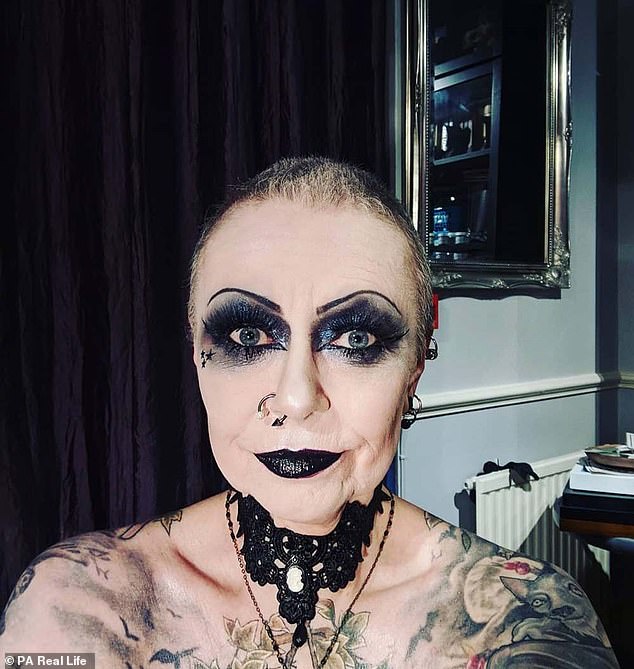 Speaking of her life-choices, Jane explained: ‘Life to me is about helping people and influencing them to be more positive. You have to be who you are’