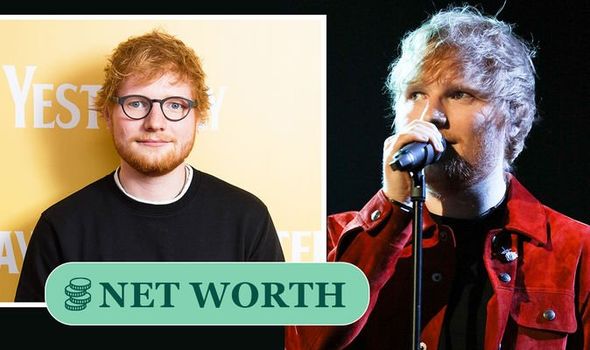 Ed Sheeran has amassed an impressive net worth over the past 16 years, and that is only going to increase following his newly-released album =. So how much is the singer worth? And how has he gained such incredible fortune?

According to Celebrity Net Worth, Ed Sheeran has a net worth of £150 million.

He reportedly added a whopping £40 million to his net worth this year, and with a new album out, that number will only increase.

Ed’s father was a curator at Cartwright Hall in Bradford and his mother worked at Manchester City Art Gallery.

In December 1995, his family moved to Suffolk where he attended the independent Brandeston Hall preparatory school.

He has an older brother called Matthew, who works as a composer.

At the age of four, Ed sang in a local church choir and learned to play the guitar and write songs aged 11.

A 2004 school report described him as a “natural performer”, and his classmates also voted him “most likely to be famous”.

In 2008, he moved to London and began playing at small venues.

The next autumn, he began studying music at the Academy of Contemporary Music in Guildford, Surry as an undergraduate aged 18, but left without permission in the same year to support hip-hop artist Just Jack.

In 2009, Ed released another EP, You Need Me and also collaborated with Leddra Chapman and CeeLo Green.

The next year, Ed posted a video and rapper Example invited Ed to tour with him.

In the same month, he also released his critically acclaimed Loose Change EP, which featured his future debut single The A Team.

Sheeran began to be seen by more people over the internet through YouTube and his fan base expanded.

He also received praise from newspapers and Elton John for his music.

When in LA in 2010, Jamie Foxx invited Ed to perform at The Foxxhole and this resulted in Ed being given a free recording space and a place to stay whilst he was there.

In April 2011, Ed appeared on the TV music show Later… with Jools Holland, where he performed his debut single The A Team.

Six weeks later that song was released as a digital download in the UK.

The release served as the lead single from Ed’s debut studio album, + (pronounced “plus”).

The A Team entered the UK Singles Chart at number three, selling over 58,000 copies in the first week. It was the best-selling debut single and the overall eighth-best selling single of 2011, selling 801,000 copies.

Eds second single You Need Me, I Don’t Need You was released that August – he announced this while playing a headline set at Glastonbury Festival.

The second single peaked at number four on the UK Singles Chart.

Lego House was release as the third single and became Ed’s fourth consecutive top ten single in the UK, peaking at number nine.

As his success rose, Ed found more opportunities coming his way – from touring with other well-known artists, to collaborating and writing songs.

Taylor Swift contacted Ed after hearing his music while touring Australia in March 2012.

Ed later co-wrote and provided vocals for Everything Has Changed.

× was nominated for Album of the Year at the 57th Grammy Awards.

In December 2016, after a year long hiatus and social media break, Ed tweeted a picture and changed his social media profiles to a light blue, implying the release of a new album – each of Ed’s previous albums were a single coloured background with a solid mathematical symbol.

In March 2017, he released his third album ÷ (pronounced divide) and it debuted at number one in the UK, the US, Germany, Australia, Canada and other major markets.

With first week sales of 672,000 it is the fastest selling album by a male solo artist in the UK.

Ed then went onto and performed 260 shows across the globe.

Trade publication Pollstar announced via the Daily Mail last year that Ed’s international divide tour earned him an estimated $775.5million, this works out as £579million.

That was enough to become the highest-grossing concert tour of all time, topping U2’s “360 Degrees” tour that took place back in 2008.

Ed told Pollstar: “I just found out the Divide tour is now the highest-grossing tour of all time, this is amazing.

“I feel very lucky to have experienced all of the wonderful countries and crowds over the past two and a half years. Thank you to the fans and everyone who made it possible.”

After finishing his mammoth tour, Ed announced he would be taking an 18-month break.

And this year, he has returned with the final album in the set, = (pronounced equals).

In June, he released Bad Habits the lead single and it was his 10th UK number one single, with the song spending  eleven consecutive weeks at the top of the UK Singles Chart.

His eleventh week at number one in the UK saw him become the first British solo artist to notch up 52 weeks at Number 1 across his catalogue, with only Elvis Presley (80 weeks) and The Beatles (69 weeks) achieving more weeks at the summit.

= was released this week and Ed explained how he had “started writing and recording” the album in June 2017.

“Its been a long, long process. I’ve been through love, loss, new life, grief and everything in between during the whole period of writing it, and I feel like it’s really a coming of age record. I’ve never been more proud of a body of work, or more excited/nervous for you all to hear it,” he told fans on social media.

Since July 2015, Ed has been in a relationship with childhood friend and former secondary school classmate Cherry Seaborn.

They announced their engagement in January 2018 and were married a year later.

It was reported on 12 August 2020 that the couple were expecting their first child.

And on 1 September, Ed announced on Instagram that Cherry had given birth to a baby girl the previous week.