It has to be said that, for Rick Springfield and Russell Morris, death becomes them.

So much so, that they have collaborated on a concept album set on the porous fault line between the living and the dead, called Jack Chrome And The Darkness Waltz, which debuted at number one on the jazz and blues charts last week. 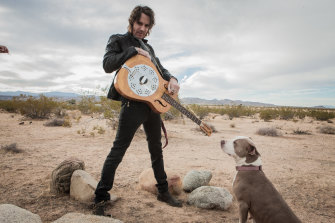 Rick Springfield has always been frank about how much darkness there is in his thinking and writing.

The two veterans of Australian music – Morris, whose first two solo singles, including The Real Thing, went to number one in 1969, around the same time Springfield’s band, The Zoot were laying waste to the charts and the teen magazines – developed an interest in the Mexican festival, The Day Of The Dead, when living in Los Angeles in the early ’70s.

Morris, who would return to Australia soon after, was excited by “how joyous it was to be there, with people happy and singing, dressed in beautiful colours and wonderful hats”. His mate, whose international solo career had taken off with Speak To The Sky and would peak later in the decade with Jessie’s Girl, felt an even deeper connection.

Even at his seemingly sunniest, Springfield’s frankness about how much darkness there is in his thinking and writing has been a fascinating aspect of the singer/songwriter and actor who will tell you that he attempted suicide at 16 and has spent many years in therapy and studying Eastern philosophies for some kind of answer.

“Yeah, it’s always there. I’m writing a new album now and it’s going to be more power pop, but a more modern version of that, but the dark ideas are still there” Springfield says. “I always make a joke that I could never write Don’t Worry Be Happy, I just don’t have that in me,” 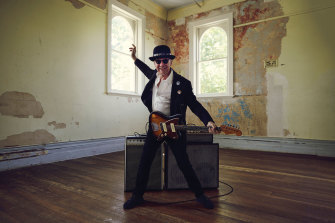 Russell Morris was inspired by Mexico’s Day Of The Dead festival.

Then he went further, inspired to don traditional Day Of The Dead deathly white makeup for a filmclip he shot quickly to put up on YouTube, anonymously at first, and then under the name Jack Chrome.

When a mutual friend tipped Los Angeles-based Springfield to it, his response was immediate: two days later he sent Morris a song of his own, the twanging country blues Godforsaken World, and a filmclip in full DOTD costume. He followed it up with a suggestion: why don’t we do more of these, maybe a whole album of them? You write one song, I write another.

“I was overwhelmed. And then I thought this would be fantastic fun, and it was,” says Morris who suggested that they write the songs – which incorporate any number of roots-based styles – around a theme but as one character/voice, Jack Chrome, bouncing songs to and fro across the Pacific.

And balanced each other, reckons Springfield.

“On this record, you can tell his songs from mine because Russ’s are much more up, positive, and mine are more like Godforsaken World and Death Drives A Cadillac, and the darker things,” Springfield says. “But I think it’s a good mix. If it was all mine [he laughs], it would be a very depressing album.”

That sounds droll, but not necessarily accurate, and not just because Springfield is a naturally funny and warm man. While his songs have a darker hue, it is not just darkness but complexity. Something like, you could say, the Day Of The Dead festival itself, which has a more nuanced view of the dead and our relationship to them than the more familiar “scary” world of Halloween.

“The whole Day Of The Dead thing is such a better idea than reincarnation,” insists Springfield, who looks startlingly good at the age of 72, more Dorian Gray then reincarnated. “With reincarnation you gotta come back and live through all that crap again. You gotta be a kid you gotta go through the insecurities, get zits, deal with girls or deal with boys, you gotta get a job and then you get depressed.

“It’s much nicer than that when you come back as the spirit you were and you embrace your loved ones. It’s a beautiful thing actually.”

The Morris Springfield Project’s Jack Chrome And The Darkness Waltz is out now.