Such is the beguiling nature of memory that I can say with certainty that you knew someone now dead who made better sausage rolls than anyone alive today. I suspect a whiff of my paternal grandmother’s sausage rolls, if this drab world still held such treasures, would be a sensory trigger that might send me on a Proustian reminiscence into the darklands of 1960s Shepparton from which you and I might never emerge. They were incomparable treasures around which a barren world spun.
Given that I have been to the mountaintop by tasting Marny’s sausage rolls, it’s natural the Lorne Aquatic and Angling Club begged me to be the celebrity judge of the World Sausage Roll Championships. I don’t know with what currency Channel 10 pays Matt Preston. The club promised to pay me in beer. Pass the cravat.
Blue sky on the coast, but metaphorical thunderclouds on the horizon. Aged entrants arrived with steaming trays of delicacies, looking confident, as if it was in the bag. As the crowd grew I had my first misgivings. “No one’s going to take this too seriously are they?” I asked The Commodore. He had the look of a man who’s suddenly realised he’s planted a triffid instead of a peony. “Jesus, Anson, every old bugger for 50 miles has entered using their great aunt’s secret family recipe. You tell me if you think that’s serious.” 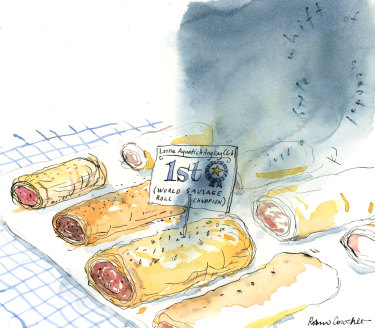 I considered bailing. Taking a six-pack under the pier. Because to declare someone’s Aunty Mavis didn’t make the best sausage rolls of her generation is to imply that she spent too much time downtown with her hair piled high expanding the frontiers of her libido. I’d been set up to insult the dearly beloved relatives of everyone in town. There could only be one winner and judges would be tarred and feathered by the losers.
Of the other two judges Leon would need the most tar and feathers. Leon knows his way round a roll. It’s said Leon once navigated blindfold around Australia on a bet sniffing his way from bakery to bakery without spending a moment lost or hungry. Jorge is the town’s Argentinian restaurateur, a good-looking rooster with a gastronomic reputation stretching right along the surf coast. Using a semaphore of suggestive blinks a few heavily painted contestants offered Jorge carnal bribes.
Tray after tray of sausage rolls were laid in front of us; large, small, seed-strewn, naked, flaky, flaccid, pork, rabbit, lamb, fennel … We tasted them blindly, knowing them only by number, and marked their various attributes: taste, consistency, appearance. On and on they came and we ate and judged with no thought for our safety. There were some splendid sausage rolls. But after the first 20 or so I wished I was an Indian on the Malabar coast judging samosas, or a Chinese in an anglers club on the Yellow Sea judging dim sum … or an Inuit on an ice floe scoring various blubbers out of 10. Anything but another sausage roll.
The hour between judging and announcement was happy for all. Each contestant was still a chance; each judge was still an authority. The club pulsed with optimism and inebriates.
The sun had gone down and the wind risen by the time The Commodore’s daughter was declared the winner and handed the cup. This was doubtless all above board. Just good cooking on her part. But dark mutterings ran through the three hundred. People called me dupe. People called me stooge. One guy whistled the theme from The Sting. Another said I looked a dead ringer for Robbie Waterhouse. A woman mentioned Ivanka Trump and wondered if we might fly in Robert Mueller to clear this up. In its disappointment the crowd had turned cynic. I smelt boiling tar and slunk away.
I don’t think anything untoward went on. I know the Commodore as a man of great integrity. But so was Siegfried. And so was Roy. They made an elephant disappear in front of a thousand coked Las Vegans every night for 20 years with integrity.
Turns out the Commodore had paid to copyright the phrase “World Sausage Roll Championship.” Is he a perfectly disguised genius? Because if his daughter opens a bakery, as is rumored, she’ll be able to paint, “World Sausage Roll Champion,” on its window and showcase the cup. That oughta stop a tourist bus. Strange things happen on the coast in winter. Rumors swirl, people brood.