Home » DAN HODGES: And they told us Brexit would turn Britain into nothing! DAN HODGES: And they told us Brexit would turn Britain into nothing!

DAN HODGES: And they told us Brexit would turn Britain into nothing but Liechtenstein with nukes!

It was immediately obvious that the two figures in black who leapt from a car outside the seaside chippy weren’t stopping for lunch. Moments later, the men from the counter-drone unit were questioning a man with a backpack who was protesting his innocence. ‘Have they shot him yet?’ joked a watching lifeboatman.

Here in St Ives, Cornwall, a mile from the Carbis Bay site of the G7 summit, Boris has kept his word. The beaches are indeed open. But getting off them is a different matter. ‘We can take you to Seal Island,’ explains Mel at the Sea Safaris pleasure cruise booth, ‘but we can’t go west. They’ve closed the Channel. And I’m afraid we can’t go in the other direction, because there’s an aircraft carrier out there. If we get close, they’ll bomb us.’

The imposing security – with armed police roadblocks along the narrow lanes, the HMS Prince of Wales aircraft carrier sitting out in the bay, and a radar-tracking station poking out from behind the Godrevy Lighthouse – would deter the more timorous traveller.

But for your average Brit, finally released from lockdown and bamboozled by the complexity of the international traffic-light system, these are trifling impediments.

Sadly, Boris and his fellow leaders are unable, or unwilling, to leave the ring of steel in Carbis Bay. Which is a disappointment to Paul Raithbhy and his fellow Extinction Rebellion protesters. ‘I’m here to hold them to account for their promises on the environment,’ he tells me from beneath his jellyfish-shaped umbrella.

Here in St Ives, Cornwall, a mile from the Carbis Bay site of the G7 summit, Boris has kept his word. The beaches are indeed open. But getting off them is a different matter

On one level, the G7 is a shining example of all that is wrong with our global governance. The world’s elite descended in their armoured limousines. According to local reports, police spent the days leading up to the summit asking about hidden mine shafts and smugglers’ tunnels. The dignitaries remain cocooned in their five-star hotel, pose for a beachside barbecue, and announce they have put the world to rights. Then they breeze out again, never to return.

But this G7 is how 21st Century global diplomacy is conducted. And for the summit’s ringmaster, Boris Johnson, the past week has been a personal and political triumph.

This was the summit that was never supposed to happen. In the wake of Brexit, Britain was meant to slip into inglorious international isolation. Then we were told we had become not just an isolated nation, but a plague island. Our Covid record had, it was claimed, turned us into Europe’s untouchables.

But once again Boris has defied his – and the nation’s – critics. It may take a couple of weeks longer than he’d hoped for us to take our final stride back to normality, but Britain is open again. Not just for the holidaymakers thronging the bars and cafes of St Ives, but to the globe.

The success of the vaccine rollout meant it was Cornwall that was able to provide the stage for the first major international meeting since the start of the crisis.

History will record that the process of building back a better world began not in the corridors of the UN or the White House, but at the reception desk of the Carbis Bay Hotel, just off the B3306.

And that wasn’t part of the script. Once we left the EU, our European partners were meant to turn their backs on us. Yet there they were – Merkel, Macron and von der Leyen – munching on Portscatho mackerel and Newlyn lobster.

Of course, what we have witnessed over the past few days was basically a giant global photo opportunity. The Northern Irish border issue has not been solved. Our post-Brexit economic realignment has only just begun. But as we’ve seen before, the Cornish summit has pulled the rug out from under the dire predictions of the Remain ultras. Britain is not a superpower. But we’ve no desire to be one. Yes, our EU exit may have reduced our influence with Brussels, but we are G7 members, leaders within the Commonwealth and permanent members of the UN Security Council. Boris’s critics may crave it, but the past week has shown we are not destined to become Liechtenstein with nukes.

In fact, if anything, last week saw Britain begin to expand its influence. While the eyes of the world were on the G7, Boris and his aides were talking up the D11, a new global alliance of the major democratic nations involving Australia, India, South Africa and South Korea.

In particular, they believe Britain needs to take a lead in countering the advance of a new Bamboo Curtain. ‘Boris thinks it’s very important that there’s a network of democratic support and investment that is a clear alternative to China,’ said one official. That said, for No 10 the most significant moment of the past few days hasn’t been the publication of a grandiose blueprint for a new post-Covid world order, but a simple elbow bump. 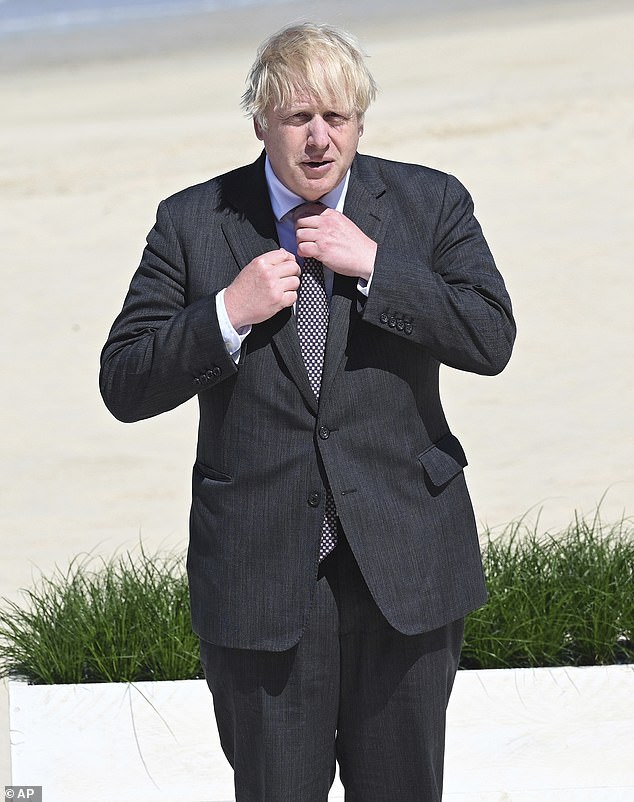 This was the summit that was never supposed to happen. In the wake of Brexit, Britain was meant to slip into inglorious international isolation. Then we were told we had become not just an isolated nation, but a plague island

There is something ridiculous about the inelegant diplomatic scramble that follows the election of a new US President.

Who will receive the first phone call? Who will get the first invitation to the Oval Office?

But the race to be first to host the leader of the free world is a significant one. And Boris won it.

Before the summit began there were dire predictions about what we could expect. Joe Biden would give Boris a flash of Irish anger, lambasting him for putting the peace process at risk.

It never happened, partly because the two men struck up a genuine rapport. ‘Biden’s a great storyteller,’ one insider told me. ‘He’s got a lot of experience, and he likes to tell old stories to illustrate a point. And Boris likes that.’

It’s also because Biden was clear what he needed to accomplish on his maiden international trip. He sees it as his mission to rebuild alliances stretched to breaking point over the past four years. And causing a public rupture with the United States’ strongest ally wasn’t on his agenda.

Which leads to the other crucial reason for the success of the transatlantic bromance. Last year, Biden was reported to have described Boris as ‘a clone’ of Donald Trump. He isn’t. And this was the week the President finally recognised it.

Rather than be greeted by Trumpian nationalistic bombast, Biden was met by a Prime Minister who wanted to maturely recast and reground the cliched special relationship. ‘I don’t mind the phrase,’ Boris explained. ‘But it encompasses a reality which is that the UK and the US have a real congruence of views on some stuff that really matters to the world.

‘So we believe very strongly in democracy, in human rights, in the rules-based international order… it’s a relationship that’s endured. An indestructible relationship.’

As the G7 leaders jostled for position at a photo-call, Emmanuel Macron attempted to take over the show. Angela Merkel ushered Boris ahead, telling him: ‘You are the leader.’ Joe Biden sees that now. And so does the world.