Home » Lifestyle » Cut it out, Craig: Maverick MP claims he is cancelled Cut it out, Craig: Maverick MP claims he is cancelled

Every now and then a politician comes around with views so “crackpot” – the word used by the Australian Medical Association president to describe MP Craig Kelly’s interesting COVID opinions – that you have to ask: how the hell is this guy in Parliament?

With the eager assistance of Prime Minister Scott Morrison, that’s how! 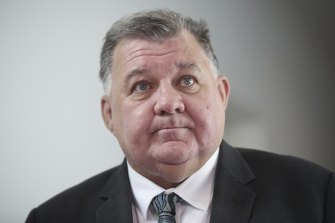 Kelly, member for the Sydney seat of Hughes, has long tangoed with the more marginal opinion-holes of the internet, ranging from climate change “scepticism”, to his assertion that coral islands float.

Kelly is also an expert on foreign policy. On the 298 people killed aboard flight MH17, shot down by the Russians, he told Sky News in 2018, “If some of the things that Russia has gotten away with in the past has to be slightly looked over, well I’m sorry, that’s the price that we have to pay sometimes to have good relations going forward”.

Kelly shared false reports claiming the violent insurrection at the US Capitol building in January was actually organised by left-wing Antifa protesters, and in 2018 he travelled to Azerbaijan, which has been ruled by the same family since the end of Soviet occupation, to declare its election a “coherent, democratic process”. He was on the ground for 48 hours.

Everybody has one of those uncles, right? In my family his catch-phrase is “truth is the new hate speech”.

Well, the Liberal party is no different, and up until now, Uncle Craig has been tolerated with the electoral equivalent of indulgent chuckles, which is to say, repeated pre-selection.

That Kelly is a member of the Coalition’s right wing conservative faction – more resilient than a floating coral island – has a lot to do with his ongoing survival.

It is a brave Liberal Prime Minister who sets off those hounds.

Tony Abbott and Malcolm Turnbull both supported Kelly’s pre-selection, despite attempts from the Liberals’ moderate faction to knock him off.

Then in 2018, Morrison made it clear Kelly was to be protected from a pre-selection challenge, despite (or perhaps because of) Kelly’s support for Peter Dutton over Morrison in the leadership vote following Turnbull’s ousting.

Morrison, the ultimate pragmatist, intervened to prevent an ugly factional war before the 2019 election.

But that decision is looking less than clever now that Kelly’s misleading views on the pandemic are becoming a public relations headache for the government.

Like all purveyors of truth, Kelly uses social media to push his theories, and his Facebook page has large levels of engagement. He has also appeared on the podcast of celebrity chef-turned-conspiracy-space-cadet Pete Evans.

Kelly has expressed scepticism about the COVID vaccine, even if approved by the Therapeutic Goods Administration, he pushes unproven drug treatments, including one that is meant for head lice, and says it is akin to “child abuse” to make children wear masks.

That no child is required to wear a face mask in Australia is a technicality unmentioned on his posts.

Medical experts have expressed horror at such misinformation being spread by a member of the government. The government’s own Chief Medical Officer Paul Kelly has politely said Kelly’s views are “not scientifically based”.

Kelly claims he is a victim of “cancel culture”, but for one who has been silenced by the cold hand of political correctness, he gets an awful lot of air time.

He is a regular guest on Sky News, he has his Facebook page, plenty of media coverage, and there is also the forum of parliament, which amounts to a literal national stage where speakers enjoy parliamentary privilege.

Besides, the harsh arithmetic of politics means that the Prime Minister, who sits on a one-seat margin, cannot cancel Kelly.

He is also not Kelly’s boss. The people of Hughes are. Those people include Opposition frontbencher Tanya Plibersek’s mum.

“My mum lives in your electorate and I don’t want her exposed to people who are not going to be vaccinated because of these crazy conspiracy theories that you’re spreading,” Ms Plibersek said.

The photographs of the exchange told the story. Plibersek’s gestures are a gallery of emotions – the finger point of frustration, the face palm of incredulity, the eye roll of exasperation.

Following this altercation, Morrison did invite Kelly to his office (the government spin had him being “hauled in”), not to cancel him, but to tell him to Cut It Out. Kelly reportedly agreed to stop posting COVID information on social media and to adhere to the government’s line on vaccines and treatments.

Let’s hope that forthwith Kelly sticks to his knitting – although the people of Azerbaijan may not agree.

John Legend's 'Beautiful Grandmother' Dies Just Days After Birthday: 'She Always Had a Story to Tell'