A same-sex couple who decided to try and get pregnant at the same time using a sperm donor both successfully conceived first time around – much to their surprise – and went on to have babies within days of each other.

Nine months on, the new parents now have a boy and a girl, after they gave birth within 13 days of each other, with Becky having Willow, who weighed to 6lb 12oz, on April 11th this year and Woody, 6lb 15oz, arriving on April 24th to Georgia.

The downside of synchronised pregnancies? The mums are enduring sleepless nights galore. 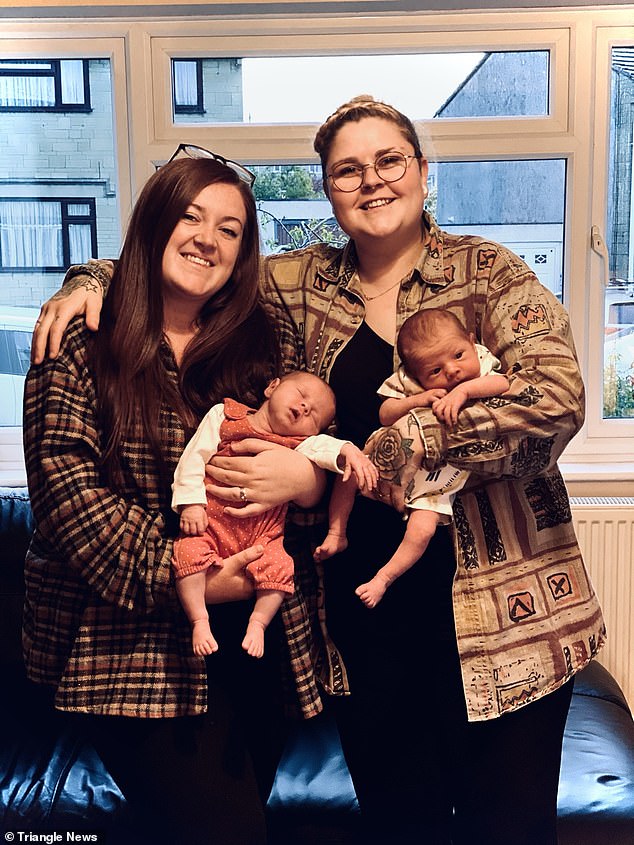 Georgia and Becky Ashford-Singer, from Bristol, decided to start a family but expensive private treatment led them to find a sperm donor on Facebook 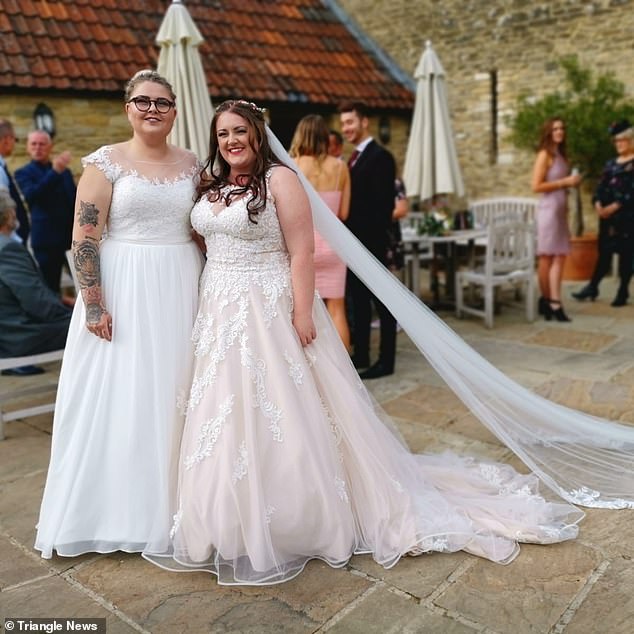 The first donor proved unsuccessful, so they both started trying with sperm from a different donor – and recorded positive tests within four days of each other 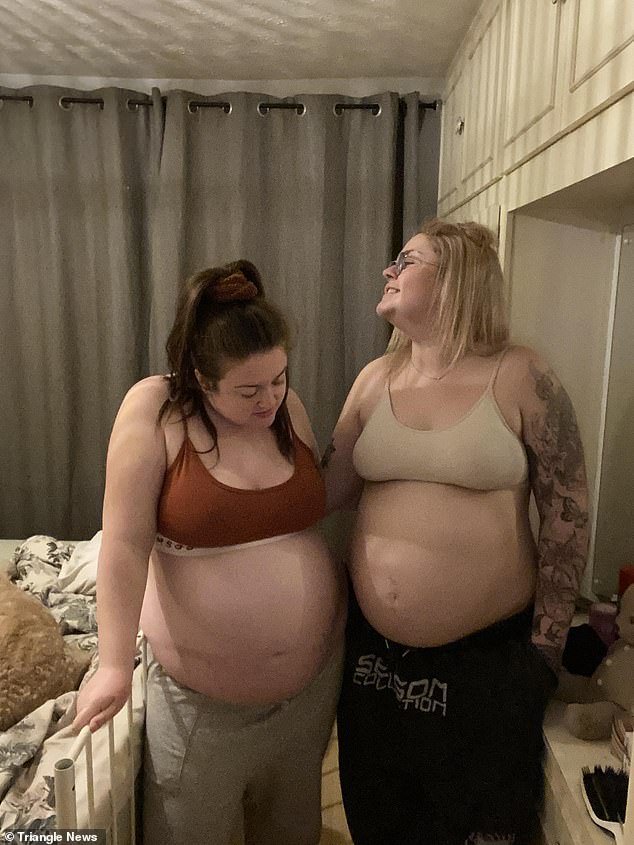 Says Georgia: ‘Our families constantly joked about how hilarious it would be if we got pregnant at the same time. It was an ongoing joke the entire way through.

‘Little did we know that would actually come true.’

The couple had both attended the same secondary school but had not been friends. Becky came out at 18 but Georgia had dated men when they met up as friends in 2017.

Georgia quickly fell for Becky and they began dating, but both wanted children.

Georgia explains: ‘Becky has been desperate to have children from the age of 18. Her sister has two kids and Becky is wonderful with them so she has always wanted to have children of her own, it was a really big thing for her.

She adds: ‘She got to the point where she thought that if she didn’t meet someone she would do it by herself so looked into being a foster carer.

‘It was a conversation we had early on because I think Becky wanted to establish whether the relationship was worth her while.’ 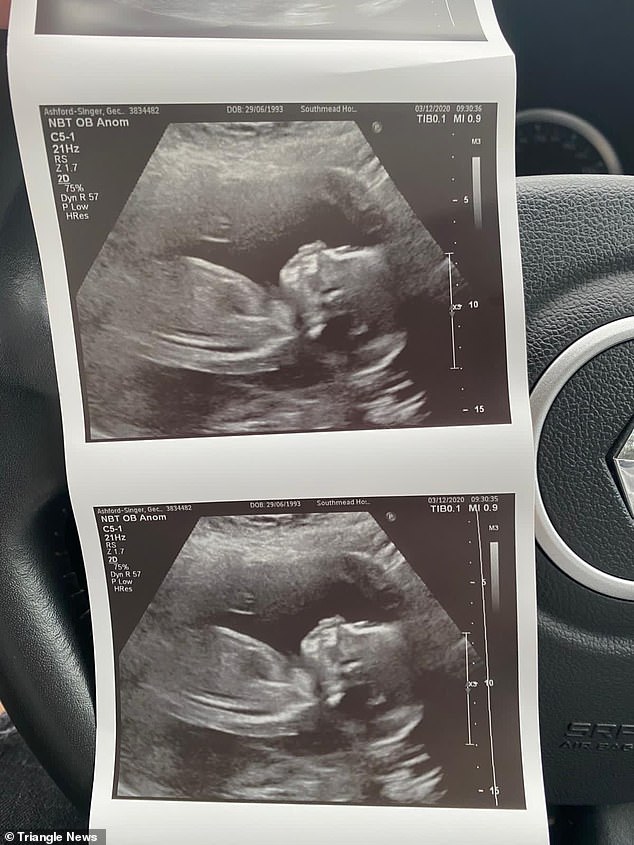 The couple had both attended the same secondary school but had not been friends – when they were reintroduced in their 20s they fell in love and decided they wanted a family (Pictured: scans of one of their pregnancies) 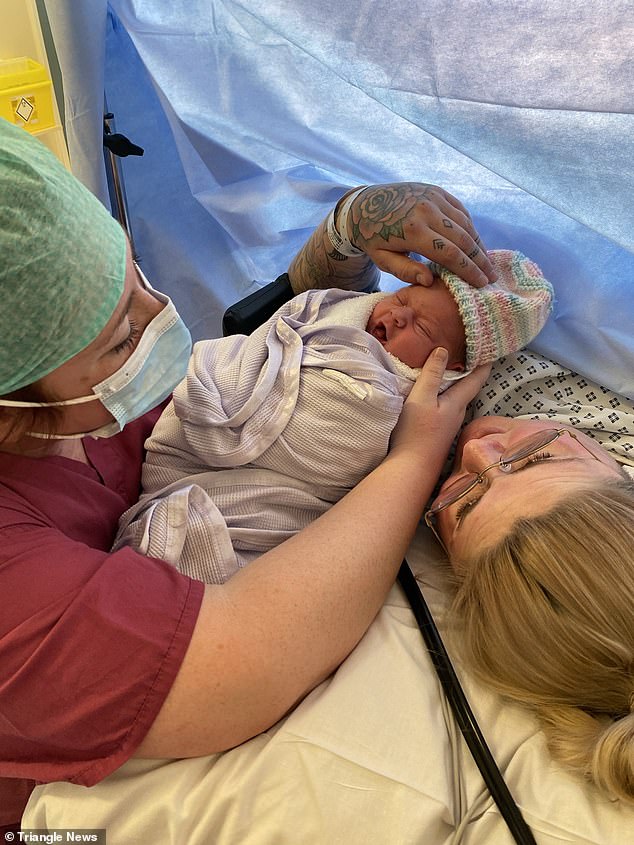 Becky shortly after her cesarean birth with partner Georgia by her side and baby willow. Georgia gave birth to son Woody 13 days later 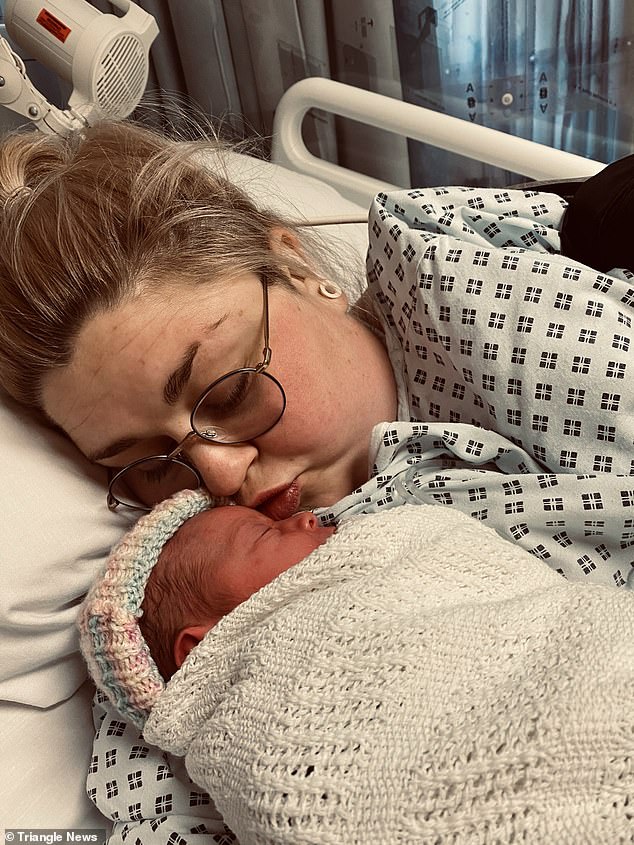 Becky, who works as a support worker for adults with learning disabilities, said the couple decided to get married before starting a family 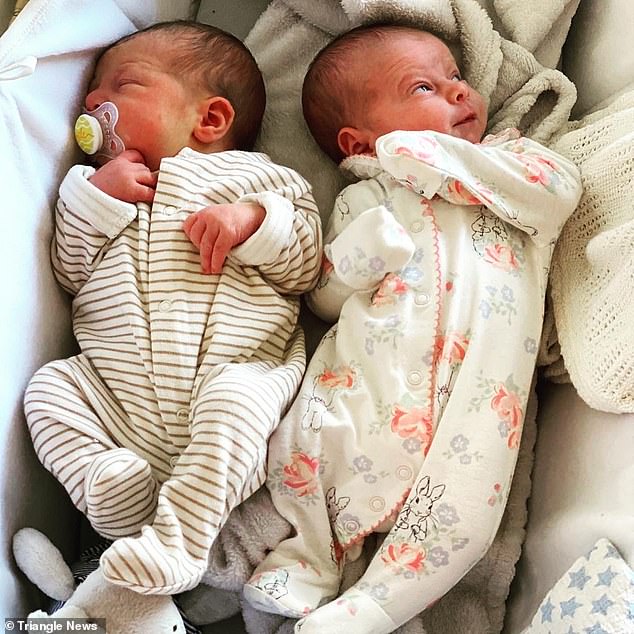 Hey brother! Willow and Woody shortly after they were born – the family say they’ve had to endure plenty of sleepless nights

A year in, the pair began looking into sperm donors via fertility clinics.

Georgia had suffered some thyroid-related health problems so they decided to take one of her eggs, fertilise it with a donor and implant it into Becky.

But the procedure cost upwards of £6,000 and the pair couldn’t afford it on Georgia’s salary as a district nursing healthcare assistant and Becky’s as a support worker for adults with learning disabilities.

So they began looking at Facebook groups for donors and also decided to get married in September 2019 so both could be named on the birth certificate.

Georgia explained: ‘We wanted someone with no family history of illness, no STIs, and a high sperm count. 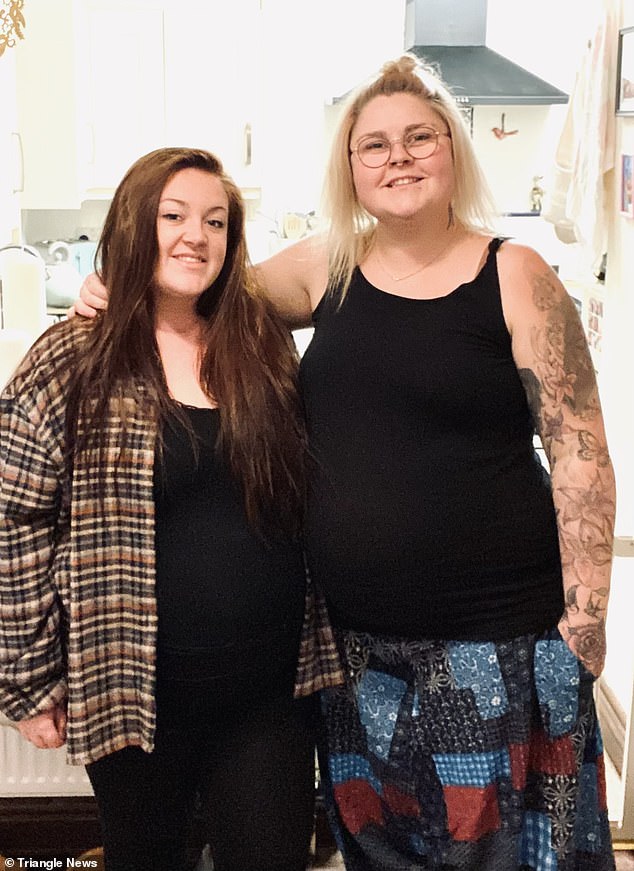 ‘We didn’t really care about what they looked like physically. Becky and I are really opposite’

‘We didn’t really care about what they looked like physically. Becky and I are really opposite – I’m short with dark hair and fair skin and Becky has olive skin and blonde hair and blue eyes.’

Becky tried with their first donor for months with no success. They then both tried with him for four or five further months before going for tests on the NHS to check for fertility problems.

However, after swapping donors, they became pregnant in the same month on Georgia’s second try and Becky’s first.

‘Becky found out she was pregnant first. She was five days late and the test came back pregnant on the Wednesday,’ Georgia says.

‘We were so wrapped up in her being pregnant that we hadn’t actually realised I felt different too.

‘I did a test first thing on the Sunday morning before I went to work and I remember leaving it on the kitchen side and thinking “I’m pretty sure that looks like two lines.”

‘It was that utter shock where you almost don’t say anything, you just carry on as normal.’

Becky added: ‘I was really happy but also really scared. The couple say they were in shock from one pregnancy let alone two.

‘Everything about it freaked me out to be honest but when we got it into our heads that it was actually happening we were quite excited.

‘We’d get maternity together, they’d always have a close sibling, they will start school together. It was actually quite nice. It was kind of like having twins, just from different bodies.’

While Georgia had every symptom under the sun, and also developed severe morning sickness, Becky didn’t feel any different.

The pair were allowed to their 12-week scans together but after that had to go alone due to NHS covid regulations. 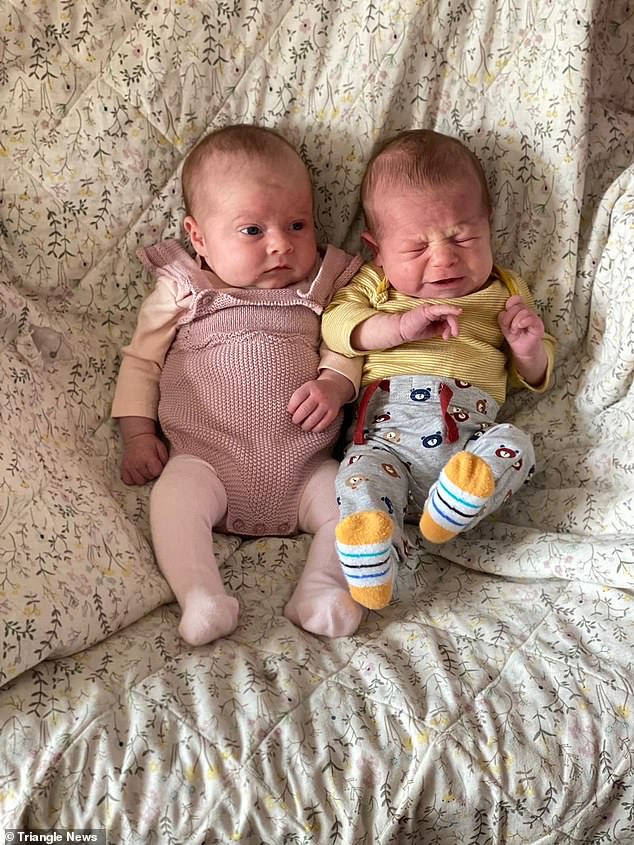 Comparing notes: the couple say it’s been useful in many ways having their children at the same time – they will now be in the same school year 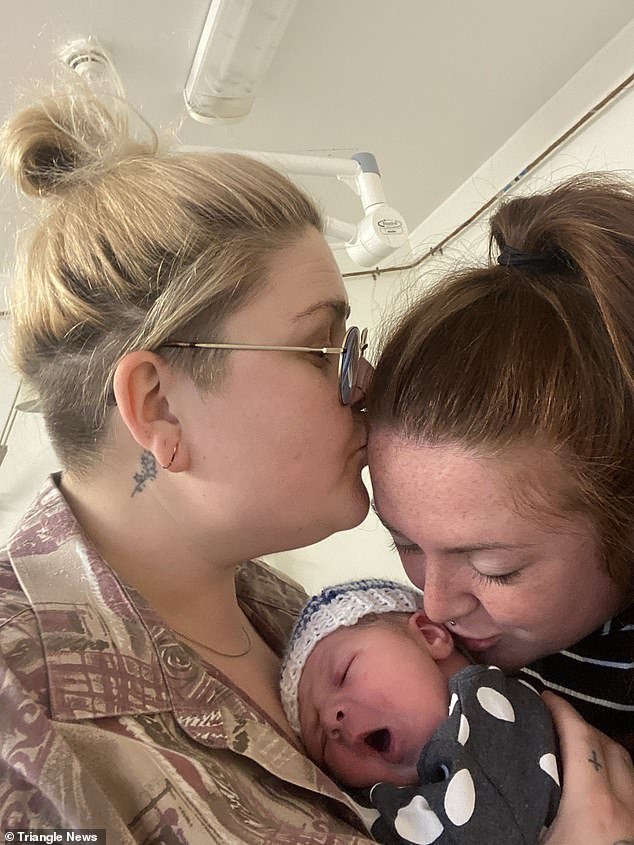 Becky pictured with Georgia and Woody three hours after his birth

‘We were comparing notes all the time. It was amazing how we both felt so completely different,’ Georgia said.

Becky’s due date was April 11, while Georgia’s was five days later on April 16. In fact, Becky went into labour as they did their shopping in Aldi and baby Willow was born on her due date following a cesarean after a 28-hour labour.

Then eight days after his due date, Georgia had baby Woody on April 24. Now they are both on maternity leave and enduring sleep deprivation together with the tots in separate cots at either side of their bed.

And they have even breastfed each others’ babies, with Georgia adding: ‘It’s a bit like two single parents living together, but it works fine.

‘My bond with Willow is brilliant and it’s the same with Becky and Woody. We swap a little bit but they do settle better with their biological mum.’

The donor asked for updates when the babies were born but does not wish to be involved. And they say they are forever grateful to him for allowing them to start a family 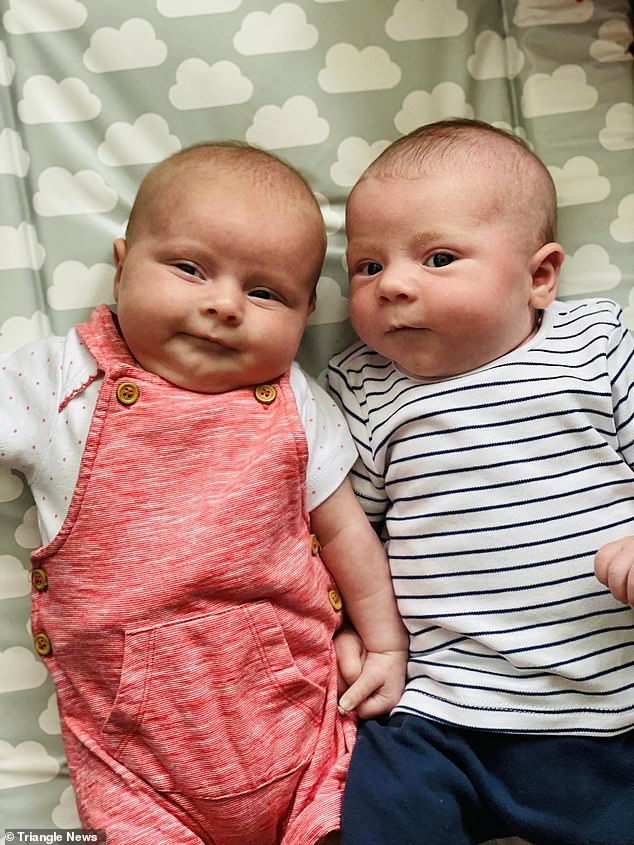 Bouncing babies: The women say the donor asked for updates when the babies were born but does not wish to be involved

Georgia added: ‘It’s amazing that men do this out of the kindness of their hearts. It is lovely.’

Eloise Stonborough, Associate Director of Policy and Research at Stonewall, said: ‘At Stonewall, we want to see a world where all lesbian, gay, bi, trans and queer people are free to be themselves, and that includes the freedom to start a family.

‘Accessible, inclusive and fair fertility services should be available to everyone who needs them but LGBTQ+ people too-often face barriers accessing NHS-funded care.

‘Research shows that same-sex couples looking to start a family often face a ‘postcode lottery’ for services, as well as lack of funding meaning that they need to rely on private healthcare which is expensive and inaccessible to many.

‘The NHS and Government must ensure that every LGBTQ+ person who wants to start a family has the support they need and we’ll keep working towards a world where all LGBTQ+ people who want to, can start a family of their own.’

It Starts On The Page: Read Noah Hawley’s Season 4 Premiere Script For ‘Fargo’