Weddings are back on! Couple set to marry today said slashing their guest list from 180 to 6 is a ‘positive’ – while another who met on Bumble during lockdown ‘cant wait to tie the knot’

Weddings have been given the green light to go ahead today with up to six people as part of the easing of lockdown restrictions in England.

While receptions are still forbidden, small ceremonies can take place with guests able to celebrate in groups of six outdoors.

One couple preparing to tie the knot today is Jess Warren-Basham, 28, and Jonny Cope, 30, from Hampshire.

Having already had to move their big day twice – they’d rearranged their initial August date for March 28, meaning they were a day short of the lockdown restrictions easing – Jess and Jonny have also been forced to cut their original guestlist down from 180 to just six. 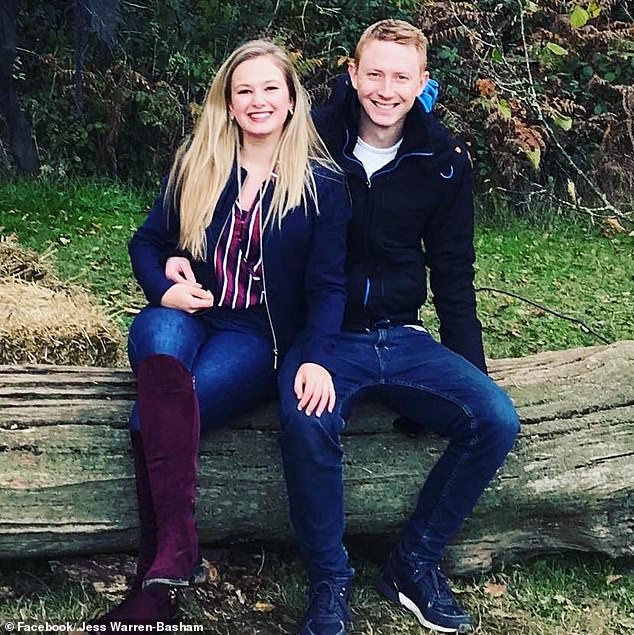 One couple preparing to tie the knot today now that weddings are allowed to go ahead is Jess Warren-Basham, 28, and Jonny Cope, 30, from Hampshire 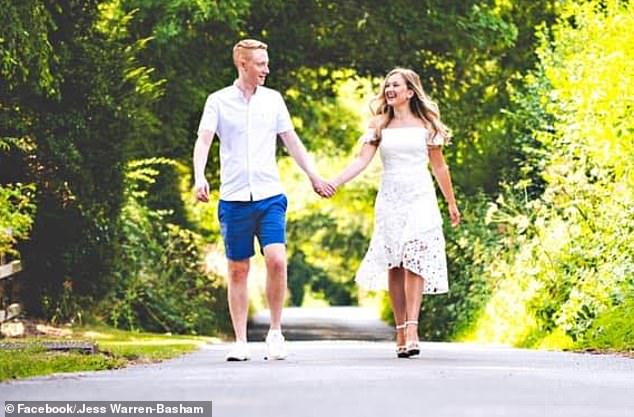 Jonny, a solicitor, said reducing their guests to such a small number was actually easier than having to choose 15 or 30 (pictured  together on what would have been their wedding day in August)

‘You have to look at the positives and for us, those four people, our parents, are the closest people that we would love to be there,’ Jess told the BBC.

‘So you could wait but we wanted to embrace the day and we’ve got some really nice things planned, some nice cars to pick us up because we’re allowed those, we’ve got an igloo getting put in the garden so we can eat dinner under the stars.

‘And how many couples get to say they get to spend the whole day with just six people?’

Jonny, a solicitor, said reducing their guests to such a small number was actually easier than having to choose 15 or 30. 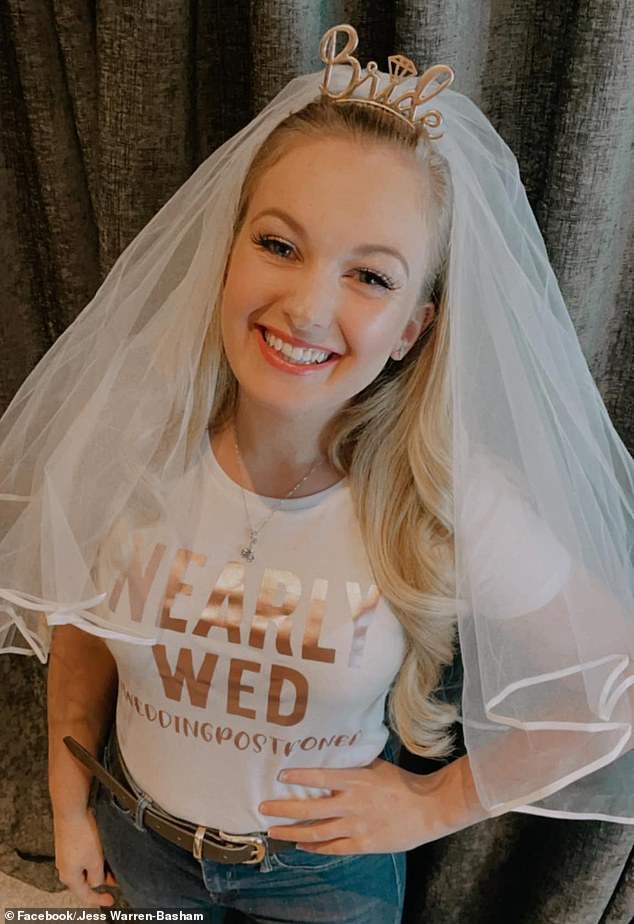 Jess, who is originally from South Wales, said one silver lining of their new wedding date is the fact she can have real daffodils

His father will take on the role of DJ for the big day, while their friends, who are performers, have recorded two songs for the ceremony.

HOW DO THE RULES FOR COVID WEDDINGS CHANGE TODAY?

From March 29, weddings and civil partnership ceremonies can continue to take place for up to six people only but will no longer be limited to exceptional circumstances.

Receptions are not permitted. However, small gatherings can take place in line with social contact limits. Therefore, they may take place outdoors in a group of six, or two households (including support bubbles, if eligible to form one).

They’ve even organised for a live stream – of which Jonny is in charge – so that their loved ones can watch from all over the world, including Jess’ aunt in Australia and her grandmother.

Jess, who is originally from South Wales, said one silver lining of their new wedding date is the fact she can have real daffodils – the flower she’s always wanted since she was a little girl.

Another couple saying ‘I do’ today is Dwain Daley, 37, and Nyasha Pitt, 43, who met online during the pandemic.

After matching on Bumble, the pair had their first online date in July 2020 and within two weeks Dwain, from Birmingham, had moved into Nyasha’s home in Coventry, and in December he proposed.

Both marketing consultants, the pair admitted even they were surprised by how quickly their relationship progressed but said they ‘can’t wait’ to be married.

Their wedding at Coventry Register Office can only be attended by six close family members and friends – but the pair hope to have a delayed celebration with all their loved ones and go on honeymoon.

Dwain said: ‘I’ve never thought I was the marriage type, but then Nyasha came along. When I saw her profile, I immediately thought, “I’m going to marry you”. 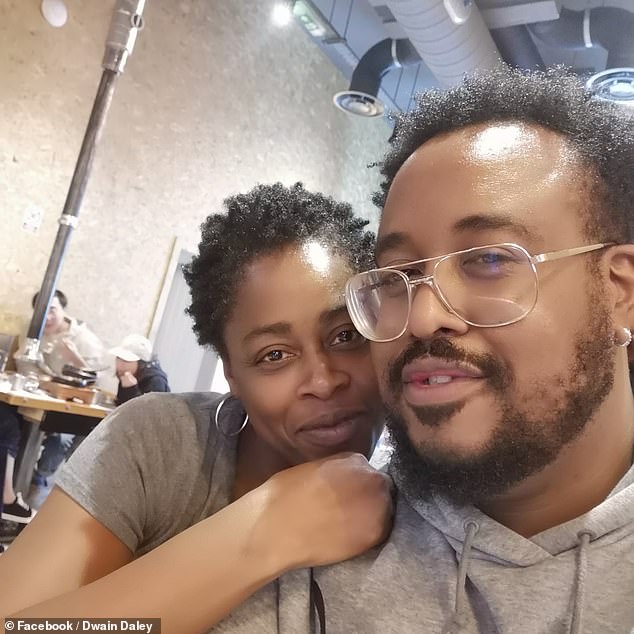 Another couple saying ‘I do’ today is Dwain Daley, 37, and Nyasha Pitt, 43, who met online during the pandemic

‘With everything that’s going on, we can’t have all the guests we want to have and it won’t be quite as romantic as we want it to be – but we both just can’t wait to be married to each other.’

Up to six people are allowed to attend weddings from today (March 29), after months when ceremonies were only permitted in ‘exceptional’ circumstances.

The attendance figure is set to rise to 30 from May before all limits are removed the following month.

Boris Johnson himself is thought to be planning to marry fiancee Carrie Symonds when the restrictions are eased – although they have not revealed any date.

Larger weddings will be allowed to go ahead from April 12 after ministers relented in the face of claims 7,000 couples would have to cancel. 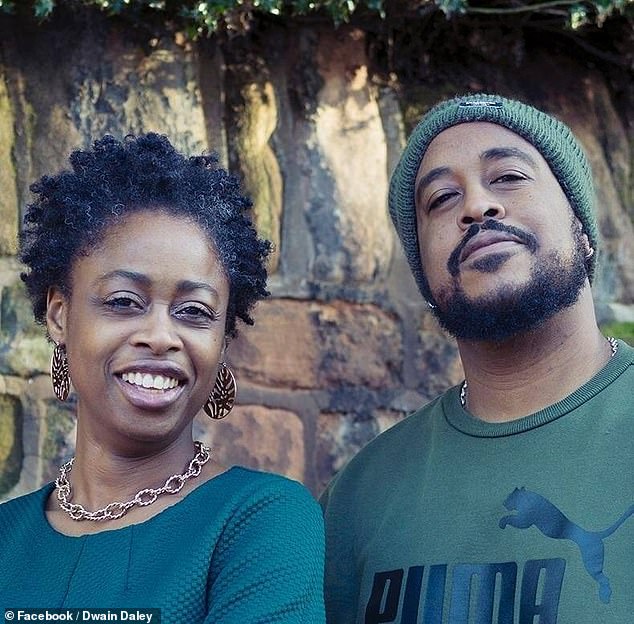 After matching on Bumble, the pair had their first online date in July 2020 and within two weeks Dwain, from Birmingham, had moved into Nyasha’s home in Coventry, and in December he proposed

Earlier this month it looked like weddings would only be permitted at places of worship, public buildings and outdoor hospitality settings.

The UK Weddings Taskforce warned that would have excluded licensed venues where 71 per cent of weddings usually take place – with claims 7,000 might have to be postponed or cancelled.

It has now emerged that the government has conceded that all venues licensed to conduct ceremonies will be allowed to hold them indoors from April 12 – even though many would not otherwise be allowed to be open.

The industry body says the government has clarified that hotels and other licensed premises will be allowed to stage ceremonies for up to 15 people inside when the lockdown easing takes effect. That includes hotels, conference centres, and holiday accommodation.

However, the taskforce said the government had told them there will not be flexibility on the tough restrictions for receptions.

Clarification issued to the industry body said: ‘The rules for wedding receptions are different. The evidence shows that it is safer for people to meet outdoors rather than indoors.

It has emerged there was confusion about whether the April 12 date merely applied to gatherings outdoors, or also meant events could be staged inside

‘That is why at Step 2 – no earlier than 12 April – wedding receptions can resume but must take place outdoors. These cannot take place in private gardens and should only take place in a Covid-secure venue.’

Weddings Taskforce spokeswoman Sarah Haywood told MailOnline: ‘We understand why the activities of sector were curtailed when we were in the eye of the storm, battling the pandemic and protecting lives.

‘But with the successful vaccine rollout, and the opportunities offered by testing to establish the Covid-status, we do not understand why this sector is once again left behind.

‘We can host events within the guidelines just as venues who host wider events will be doing for those.’

The PM’s roadmap announced in February said that up to 15 people – not including children aged under five – could attend weddings and receptions when the loosening takes place next month.

But there was confusion about whether that merely applied to gatherings outdoors, or also meant events could be staged inside.

The schedule published in February stated that from April 12: ‘Weddings, receptions, and commemorative events including wakes will be able to take place with up to 15 attendees (in premises that are permitted to open).’