MSO is among the first Victorian arts organisations to be hit by coronavirus fears – losing not only hundreds of ticket sales, but also the income from a planned global release of the concert recording. 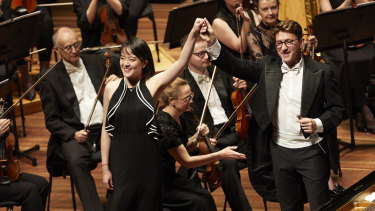 But it is not the only one.

Two artists scheduled for the What is Chinese performance and installation at Arts House for this month’s Asia-Pacific Triennial of Performing Arts (Asia TOPA) festival have been unable to leave the country due to travel restrictions, and a spokeswoman for the festival said at least one other production would be affected by the travel ban.

Meanwhile Shen Yun, which touts itself as “the world’s premier classical Chinese music and dance company” and is heavily promoting its Australian tour in March, has modified its marketing strategy after heavy social media blowback.

Australian Twitter users replied to its ads with comments such as “paid virus anyone”, “quarantine?” and “Nooo thanks! Virus spreading in every movement”. 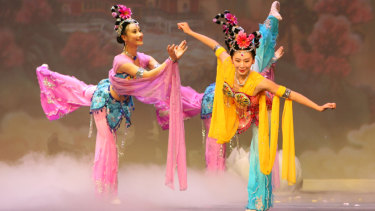 Shen Yun has been forced to issue a statement that their dancers are based in the USA.

On Saturday Shen Yun Performing Arts issued a press release titled “Shen Yun is not from China”, saying its performers “have not been to China in years, have not had recent direct contact with people from China”, and the company “was established in the rolling hills of New York State”.

MSO managing director Sophie Galaise said she had worked on a festival in Canada during the SARS outbreak, which made a loss after years of surpluses.

“People would not come because they were afraid,” she said. “We hope the coronavirus will be shortlived and things will come back to normal in the not so far-off future, but I presume we will see an impact on [ticket] sales.”

Their concert’s conductor Yi Zhang had arrived from China before the travel ban was imposed but agreed to go into “self-quarantine”, she said, though he was in good health. He was replaced at the last minute for rehearsals and the performance by Australian conductor Matthew Coorey.

MSO usually sells hundreds of last-minute tickets for this concert, but Galaise said potential audience members may have recently travelled to China for New Year celebrations and decided not to attend after returning.

The company also received calls from ticket holders and agreed to substitute for tickets to other events later in the year. The orchestra postponed some sponsor events, Galaise said, as the company did not want people to "feel uncomfortable".

Other Melbourne arts organisations were reluctant to comment on the record about the effect of coronavirus fears on audience and visitor numbers.

Asked if there were concerns about Asia TOPA audiences staying away from performances over coronavirus fears, a City of Melbourne spokesman directed The Age to a prior statement about Chinese New Year celebrations that emphasised “there is no reason for the general public to panic or change their normal activities or plans, at this stage”.

An Asia TOPA spokeswoman said they had checked ticket sales and had not seen “any direct impact on shows currently running”, but the travel ban would affect “a couple of works” in the future, possibly needing to shift their dates.

She said given the scale and scope of Asia TOPA, which features more than 50 productions, exhibitions and events from January to March, from many different Asian countries, the coronavirus “represents a relatively low impact on the festival overall”.

On Monday Melbourne-born children’s writer Gabrielle Wang said the coronavirus had given “the xenophobic undercurrent that is lingering from days gone by” a chance to resurface.

“It makes me mindful not to cough when I’m with people, in case they think I’m contagious with the virus,” she wrote on her blog.

“A little thought and a sense of common human-ness can help prevent the spread of a longer-lasting and even more insidious contagion”, she wrote.

This Is How Justin Bieber Honors Kobe Bryant Following His Death

Chris Harrison on Kelley and Peter: She Wasn't a 'Good Fit' for 'Bachelor'
04/09/2020
Categories
We and our partners use cookies on this site to improve our service, perform analytics, personalize advertising, measure advertising performance, and remember website preferences.Ok